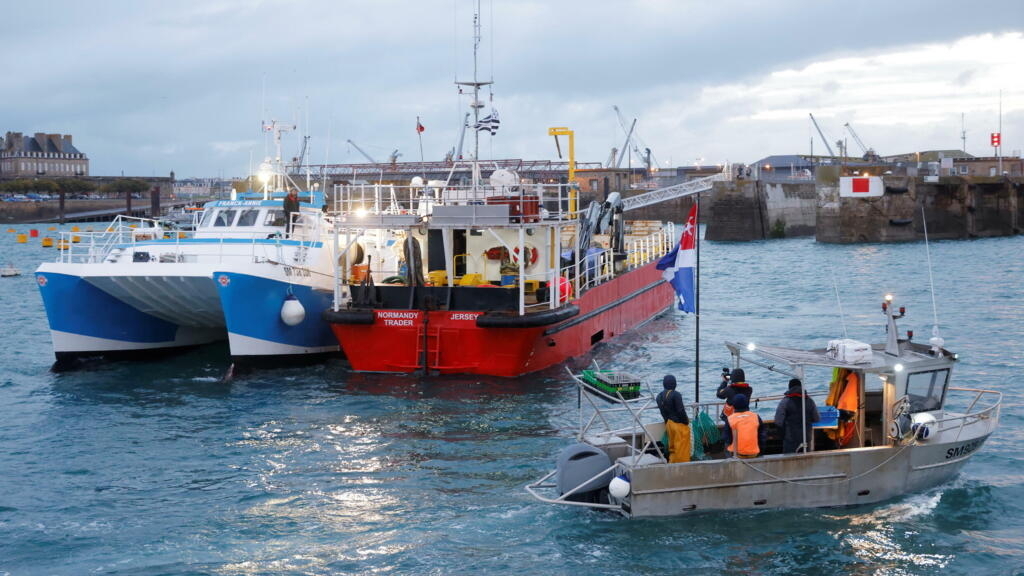 French fishermen carried out, on Friday in Saint-Malo, a first blocking operation of English boats. They then intend to limit freight access to the Channel Tunnel in the afternoon, to demand the settlement of post-Brexit fishing disputes with the United Kingdom.

They announced it on Thursday and they kept their word this Friday, November 25. In Saint-Malo, the blockade held by French fishermen lasted about an hour, from 8 a.m. to 9 a.m., with a dozen fishing boats participating in the operation, activating smoke bombs. Due to bad weather, there was no ferry from England to the privateer city.

French ships blocked a fishing boat coming from Jersey. A sign of the good-natured atmosphere, the captain of a boat offered a French and Breton flag to the captain of the Jersey boat, who hoisted it to the top of the mast.

“When Europe and the government do not carry out threats, after a while you are forced to take control again, because otherwise you have the impression that you will not get anywhere. We are not warmongers, we want our rights to be respected, a deal has been made, the English deal is not being respected “, declared Pascal Leclerc, chairman of the fisheries committee of ‘Ille-et-Vilaine.

Boats have planned to block the entry of ferries from Great Britain to two other ports in the French Channel: Ouistreham, then Calais.

In the afternoon, it is aboard their vans that the fishermen have planned to block, from 2 p.m. to 4 p.m., the access of goods trucks to the freight terminal of the Channel Tunnel.

“We do not want handouts, we only want to get our licenses back. The UK must respect the post-Brexit agreement. Too many fishermen are still left behind,” Gérard Romiti, chairman of the national committee, said on Thursday. of peaches at a press conference.

Symbolic at the entrance to the ports – where the swell may not allow all the planned actions – the initiative is more threatening near the tunnel, through which 25% of trade between the United Kingdom and the United Kingdom passes. Europe.

London received the message and reacted on Thursday evening, saying it was “disappointed” by these “threats of protest” and urging France to “ensure that illegal acts are not committed and that trade is not affected. “.

The aim is to block “exports (…) to England, to reach the British population and make people aware of what is going on. They have access to the European market and we still do not have access to their waters”, explained Olivier Leprêtre, president of the Hauts-de-France fisheries committee.

“The tree that hides the forest”

It is a “punch action to show what we are capable of, but if we have to go further, we will target other products”, he added, specifying that the watchword was “to allow passengers to pass and to block the freight”. For the chairman of the national committee, “this issue of licenses is the tree that hides the forest: its resolution will depend on long-term relations with the United Kingdom”.

While questioning the robustness of the European commitment alongside EU fishermen, Gérard Romiti welcomed the “ultimatum” launched Wednesday by the European Commission, which asked London to settle this dispute by December 10 .

Under the Brexit agreement signed at the end of 2020 between London and Brussels, European fishermen can continue to work in British waters provided they can prove that they were fishing there before. But the French and the British argue over the nature and extent of the supporting documents to be provided.

In total, since 1er January 2021, France has obtained “more than 960 licenses” for fishing in British waters and the Channel Islands, but Paris is still asking for more than 150 authorizations, according to the French Ministry of the Sea.

In this burning issue, the tone has risen several times. Last May, a French flotilla headed for Jersey for a blockade of a few hours, leading to the dispatch of British patrol boats. In the fall, Paris threatened London with “retaliatory measures”, before giving it up temporarily to give the negotiations in Brussels a chance.

French fishermen today feel comforted by the renewed support last Sunday from President Emmanuel Macron and his Minister of the Sea Annick Girardin, who assured that they would fight to the end to defend their interests.

One thought on “Post-Brexit fishing licenses: first blockades of French fishermen in Saint-Malo”