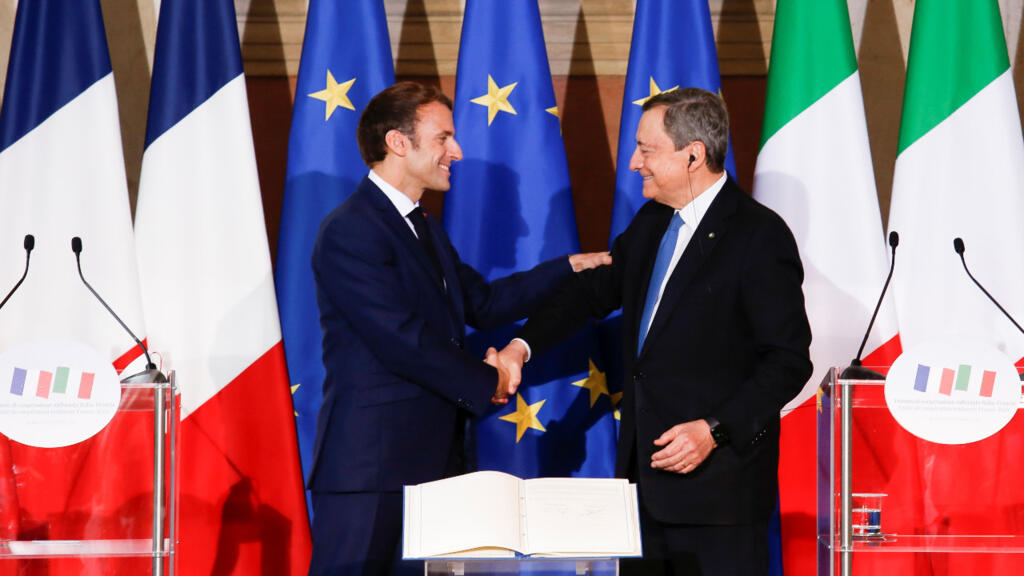 France and Italy signed, Friday November 26, with great fanfare in Rome a bilateral enhanced cooperation treaty to consolidate a relationship tested in recent years by a diplomatic quarrel and in a context of transition in Europe with the departure of Angela Merkel.

The treaty was initialed in the morning at the Quirinal presidential palace by French President Emmanuel Macron and Head of Government Mario Draghi, in the presence of Italian President Sergio Mattarella.

The three men exchanged long hugs, while the Patrouille de France and its Italian equivalent, the Frecce Tricolori (the “tricolor arrows”), flew over the capital, leaving in the sky a plume of smoke in the colors of the two countries.

This “treaty for enhanced bilateral cooperation”, known as the Quirinal Treaty, is extremely rare in Europe: it is only the second treaty signed by France after that of the Élysée, signed in 1963, with Germany, completed by that of Aachen in 2019.

From diplomatic crisis to cooperation

It was announced in 2017 but was frozen after the formation in 2018 of a populist government led by the 5 Star Movement with the League (far right) of Matteo Salvini.

The crisis culminated in early 2019 when the Vice-President of the Italian Council, Luigi Di Maio, had met in France a leader of the “yellow vests”. Shortly before, Matteo Salvini, Minister of the Interior, called for the resignation of the French president.

To protest, Paris had temporarily recalled its ambassador to Italy, Christian Masset, the most serious diplomatic crisis between the two neighbors since 1945.

Concretely, the treaty provides for areas of enhanced cooperation in matters of diplomacy and defense, digital and environmental transitions, culture and education, economic and industrial cooperation, and space.

This treaty, the exact content of which has not yet been made public, should establish a common civil service for young people.

According to diplomats, it also provides for the reciprocal invitation of ministers to the councils of ministers of the two countries, on the model of the Treaty of Aix-la-Chapelle.

France and Italy are the 2e and 3e eurozone economies behind Germany. Together, they represent almost a third of the EU’s citizens and its GDP.