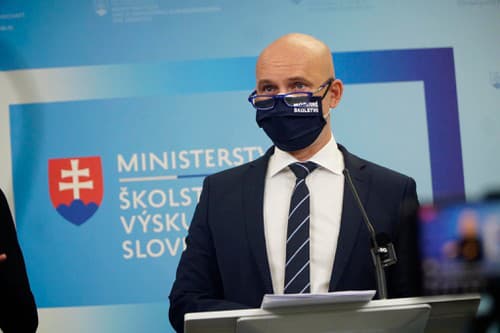 VIDEO The Minister of Education announces news in the case of schools:

The Christmas holidays could start a week earlier

Gröhling provided this information for the first time on the evening theme of Tema dne on television TA3. Christmas holiday for schoolchildren, they should start instead of the planned on 23 December for December 17. “Last year, when we closed schools in mid-October, we thought the problem was already solved, but he was not solved. We just didn’t see him happening to the kids. Today I can see what’s going on with the kids, “what it did to their knowledge, their social contacts … I’m really going to do everything because of it. Closed schools won’t solve the pandemic, it’s just vaccinations.” Gröhling argues for the remaining open schools. However, the beginning of such holidays is not yet final. “I still have to consult with experts so that we can stabilize these weeks, when it will be necessary to stay at home, and then I will announce such a decision.” the length of the holiday is determined by the minister.

However, more news should come next week. Basic art schools, leisure centers and language schools are to be closed from Monday, November 29. According to Gröhling, all extracurricular activities and clubs will also be awarded red. “No one verifies the data from the operations in the same way as we do in the case of schools,” Gröhling says today as he explains his action in the event of a current lockdown.

In a surge of emotion, the minister even said harshly why it was unacceptable for him to close schools. “Let’s finally say it. A pandemic is a problem for the elderly and the unvaccinated. Closing schools will not resolve the pandemic. We have had the worst of the pandemic, so I reject the claim that schools are a hotbed of new cases.” the minister continues, saying it was a difficult decision and thanked the principals and teachers at the schools.

The council recommended that the schools be closed

A consortium of experts suggested that full-time teaching be limited to the period from 25 November to 3 December for primary, secondary and tertiary school students. All children’s extracurricular activities should also be abolished. According to them, only full-time teaching at the first stage of primary schools and kindergartens should be maintained.

“Schools will close last, we insist that they remain open. We also agree that testing in schools should be mandatory.” said Sulík. At the same time, he agrees to tighten up the regime, but does not want schools to close. “We don’t want to raise a generation of uneducated children, that would be a huge social pity,” he added.