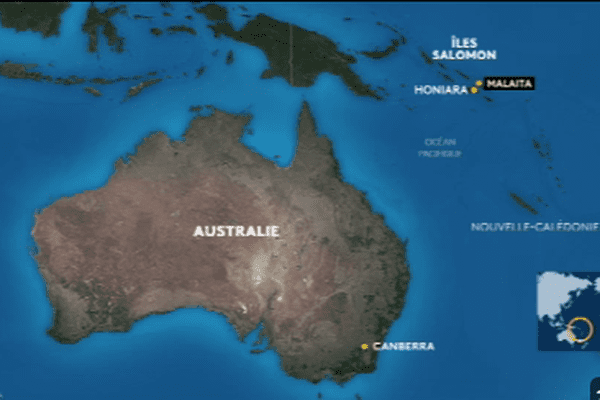 Canberra sends troops to the Solomon Islands. The aim is to help maintain security after riots have broken out in the capital. The demonstrators question their country’s break with Taiwan in favor of China.

It is at the request of the local government that Australia is deploying a peacekeeping force in Honiara, the capital of the Solomon Islands. There, rioters demanded the resignation of the Prime Minister and invaded Chinatown. Several buildings were set on fire.

The role of Australian troops is limited as detailed by Scott Morrison, the Australian Prime Minister:
“Our aim here is to ensure stability and security, to enable normal constitutional processes within Solomon Islands to deal with the various issues that have arisen and to do so in an atmosphere of peace, stability and security. It is not the intention of the Australian government to interfere in any way in the internal affairs of the Solomon Islands, it is up to them to resolve them.”

Map of the Pacific with Solomon Islands

Scott Morrisson also recalled the ties that unite the two countries and the various fields of action from Australia to the Solomons:
“When they need our help, they will receive it, whether in relation to natural disasters, when they need our help or in connection with the Covid, when they have needed vaccines and other supports in the deployment of their vaccination program. And unfortunately in a situation like this, when there is civil unrest again, we are there to help them because they are so dear to us, as members of our Pacific family.”
This is not the first time that troops from Canberra intervene in the Solomons. Especially during riots involving the Chinese presence.

The Chinese government is watching the situation very carefully according to Zhao Lijian, spokesman for the Ministry of Foreign Affairs of the Middle Empire:
“We believe that under the leadership of the Prime Minister (Manasseh) Sogavare, the Government of Solomon Islands can restore social order and stability as soon as possible. We are seriously concerned about the attacks on some Chinese citizens and institutions, and have called on the local government to take all necessary measures to protect the safety of Chinese citizens and institutions there.
Our relations have developed well over the past two years since establishing diplomatic relations with fruitful cooperation in economic and trade, infrastructure, education, health and other fields, bringing tangible benefits and the welfare of the peoples of the two countries. Any attempt to undermine the normal development of Sino-Solomon Islands relations is futile.“

Not a word therefore, it seems, in Beijing, on Australian aid to the government of Honiara. It is true that paradoxically, Canberra (like Washington) takes a dim view of the development of the Chinese presence in the Solomons, particularly fearing the establishment of a military base in the long term. A concern that concerns other Pacific countries.

To be continued, the report by Bruno Sat