TRUE OR FAKE. Does the fifth wave of the Covid-19 epidemic prove that the vaccine is ineffective? – Franceinfo 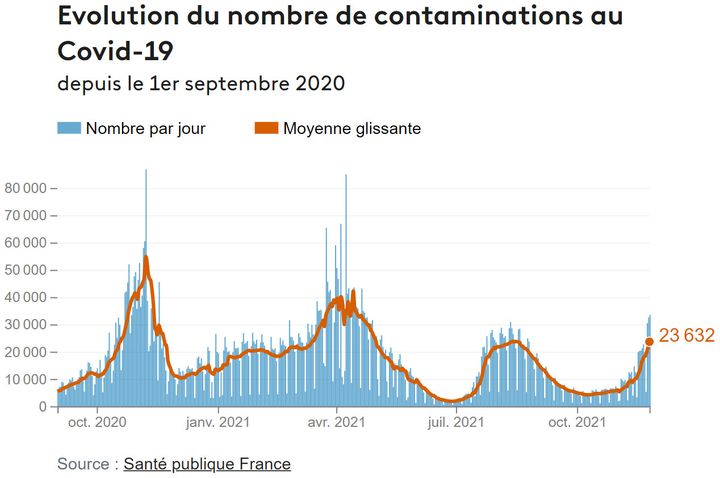 Contaminations which are on the rise again, in France as in other European countries. States which impose new health restrictions on their population, such as Belgium or the Netherlands. Even who decide to re-define and make vaccination compulsory, as in Austria. The fifth wave of Covid-19 is surging in a “dazzling” way, alerted government spokesman Gabriel Attal on Sunday, November 21. For opponents of the vaccine and detractors of the health pass, this resumption of the epidemic is proof that faced with the virus, these solutions put in place by the government are ineffective. This argument is relayed by many Internet users on social networks.

On television sets, figures of the extreme right also allude to it. “We were told that the vaccine would be the miracle solution and that we would no longer have any problems after being vaccinated”, slipped the interim president of the National Rally, Jordan Bardella, on LCI November 14. “Everyone understands that the vaccination rate is not a solution, added the RN MEP Nicolas Bay, Monday, on franceinfo. In mainland France, we are around 80% of vacinal coverage and yet we are told of a fifth wave. And tomorrow, if we were at 100% vaccination coverage, we would probably be announcing a sixth wave. ” Would the fifth wave therefore prove that the vaccine is useless? Or is this one more “fake news” in this pandemic?

Since the beginning of November, the curves of the main indicators making it possible to follow the evolution of the epidemic have risen sharply. France now has more than 23,000 new infections per day on average, as of November 25. The incidence rate is also increasing sharply, in all age groups and in all regions. It is close to 200, to 193 new cases per 100,000 inhabitants, an increase of 55% in one week. It even exceeds this threshold among 6-10 year olds (346, + 111%) and 11-14 year olds (212, + 81%) in particular, according to the latest epidemiological point from Public Health France (SPF).

The hospitalization curve is also on the rise, with currently nearly 9,000 people hospitalized, including nearly 1,500 in critical care. But unlike other indicators, the increase in hospital care and critical care remains contained: + 20% and + 16% respectively in one week, according to SPF.

“For the moment, there is no real increase, neither in intensive care units, nor in infectious disease services, confirms to franceinfo Jean-Michel Constantin, anesthesiologist-resuscitator at the Pitié-Salpêtrière hospital, in Paris. The patients who arrive are in any case not correlated with the number of new cases per day and that is reassuring. “

Many detractors of vaccination have been advancing raw figures for months, attesting that the vaccinated are more likely to be hospitalized for Covid-19 than the unvaccinated. But the numbers of these two groups are not comparable, as Franceinfo explained in mid-November.

>> Is it any wonder that the vaccinated represent a growing share of new cases of Covid-19?

“Thisthis fifth wave, it is mainly an epidemic of unvaccinated, notes on franceinfo Anne Sénéquier, doctor, co-director of the Observatory of Global Health at the Institute of International and Strategic Relations (Iris). Today, more than 80% of people who are in intensive care are unvaccinated people. “

Hospitalizations are therefore progressing much less quickly than contamination, and in the hospital the proportion of vaccinated Covid-19 patients is much lower than that of the unvaccinated. Thanks to the vaccine, “thee risk against severe forms “ of Covid-19 is “very diminished, recalls on franceinfo Arnaud Fontanet, epidemiologist at the Institut Pasteur and member of the Scientific Council. You reduce your risk of being hospitalized by 90% if you are vaccinated, which is why it is essential to be vaccinated. ” The vaccine “does not completely protect against infection, he continues. And you will all see people around you who are vaccinated and become infected, which contributes to the transmission and circulation of the virus. “

The vaccine also slightly reduces the risk of being infected, even with the more contagious Delta variant. “There is data to suggest that before the arrival of the Delta variant, vaccines reduced transmission by about 60%, with Delta this dropped to 40%.”, underlined Wednesday the boss of the World Health Organization (WHO), Tedros Adhanom Ghebreyesus.

How, then, to explain this fifth wave? First, because not all French people are vaccinated. To date, France has 51 million fully vaccinated inhabitants, or 76% of the population. So 24% of French people remain who are not vaccinated.

>> Fifth wave of Covid-19: why is the epidemic resuming so “dazzlingly” in France?

Gilles Pialoux, head of the tropical infectious diseases department at Tenon hospital in Paris, points to franceinfo this “blind spot”. “There are the 6.4 million people aged 12 to over 80 who are eligible for vaccination and have not yet received a dose.” These unvaccinated “are added to the 10 million under the age of 12 for whom we do not yet have a vaccine authorization”, figures the infectious disease specialist, stressing that the opening of vaccination to French children “debate”. “That’s still a lot of people in whom the virus circulates. And in addition, (…) it also circulates in the vaccinated, notes Gilles Pialoux. So we have overall viral circulation which is important. “ 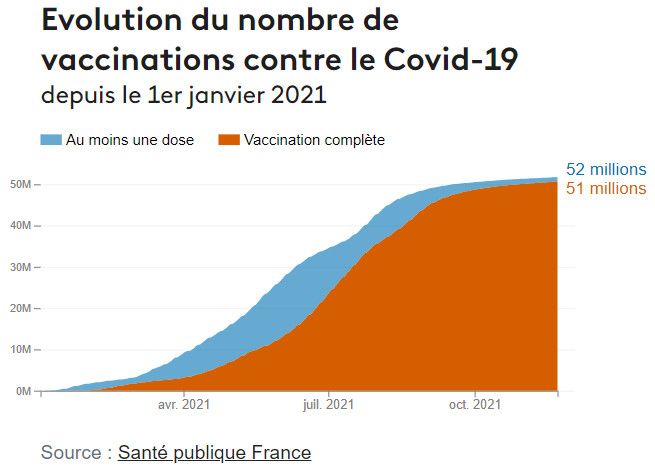 Evolution of the number of vaccinations against Covid-19. (FRANCEINFO) 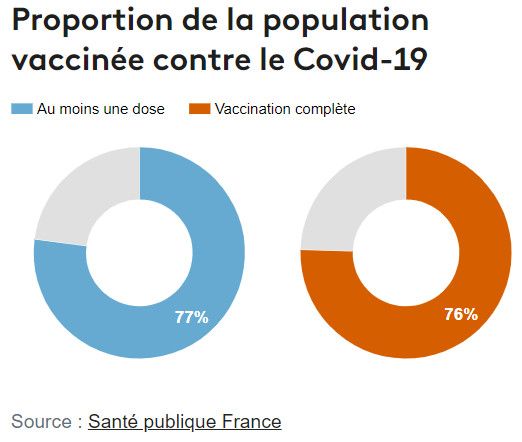 Proportion of the population vaccinated against Covid-19. (FRANCEINFO)

Other factors add up to explain this recovery. There is a “climate effect, points out Arnaud Fontanet. It’s colder, people hang out more indoors. If they don’t ventilate, don’t wear a mask, they expose themselves. “ “The modeling of the Institut Pasteur in France show that the cold and climatic conditions could increase the rate of transmission of the virus by about 30% “, compared to last summer, recalls on franceinfo Mahmoud Zureik, professor of epidemiology and public health at the University of Versailles-Saint-Quentin-en-Yvelines.

Barrier measures are also a little less respected, according to the recent survey by Public Health France. Some 53.5% of respondents say they greet each other without shaking hands or kissing, against nearly 74% at the end of the first confinement, at the end of October 2020. Less than 28% of those questioned say they avoid groupings with their relatives, against nearly 40% after the first confinement. Hand washing, airing homes at least twice a day, wearing a mask in public … All of these barrier gestures are less observed over time. The “reasons” of this 5th wave also give the “keys”, argues epidemiologist Arnaud Fontanet.

“You have to wear masks, open the windows and limit the times when you find yourself in a risk situation – without a mask in an enclosed environment with the windows closed.”

This new emerging wave is also explained by “a decrease in the effectiveness of the vaccine “ over the months, accentuated by “a Delta variant which has a higher viral load than its predecessors”, explains Arnaud Fontanet. “Six months after the second dose, you have protection [contre les formes sévères de la maladie] which is of the order of 50% whereas it was at 90% immediately after the injection. “

However, this drop in the protection conferred by the vaccine to 50% is an epidemic time bomb, notes Mahmoud Zureik. “If there are 50 million French people who are vaccinated, that means that with these 50%, there are 25 million people in France who have been vaccinated who can be infected and who can transmit the virus, so it is a huge tank. ” “If we let the contaminations flare up, we will necessarily end up having patients”, warns the anesthetist-resuscitator Jean-Michel Constantin.

The decrease in the effectiveness of the vaccine can be offset by the injection of a booster dose, open to all adults since Olivier Véran’s announcements on Thursday. “We know that one month after receiving your booster dose, the concentration of neutralizing antibodies is five to ten times higher than it was one month after the second dose., argues Arnaud Fontanet. The booster really boosts your immunity. “

“That divides your risk of infection by 10, by 20 your risk of hospitalization compared to people who have had a second dose but not a booster.”

Mahmoud Zureik list “three great pillars” on which to rely to flatten this fifth wave: vaccination, barrier gestures, including the health pass, and case detection and tracing.

“The whole issue of controlling the circulation of the virus is to avoid having a saturated health system, summarizes to franceinfo Bruno Lina, professor of virology at the Hospices Civils de Lyon and member of the Scientific Council. However, for the moment, if we continue to apply the measures that we use and if we maintain a level of protection induced by the vaccination which is as high as that which we have, it is possible that we control indeed this epidemic. Controlling it does not mean preventing the virus from circulating. “

One thought on “TRUE OR FAKE. Does the fifth wave of the Covid-19 epidemic prove that the vaccine is ineffective? – Franceinfo”