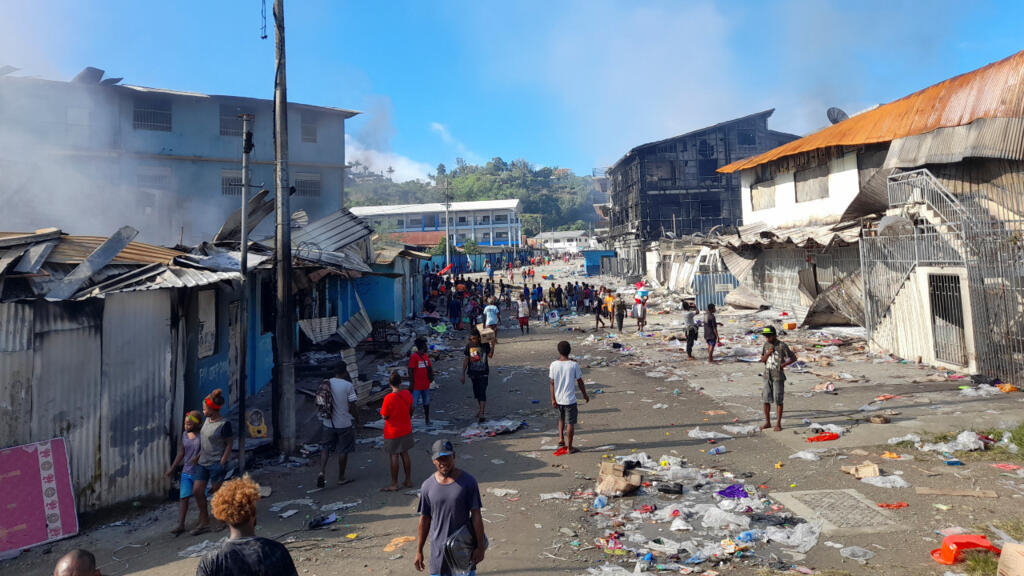 While Honiara, the capital of the Solomon Islands, has been shaken for three days by riots, local police resorted to warning shots on Friday to prevent protesters from reaching the private residence of Prime Minister Manasseh Sogavare, which they demanded the resignation.

Police in the Solomon Islands used warning shots on Friday (November 26) to disperse demonstrators trying to reach the private residence of Prime Minister Manasseh Sogavare in Honiara, the capital of the archipelago shaken for three days by riots.

On Friday, thousands of people, some armies of axes and knives, attacked Chinatown and the city’s central business district.

Buildings were set on fire and shops looted as Australia deployed a peacekeeping force.

The riots began on Wednesday when hundreds of people demonstrated to demand the resignation of the prime minister before going to the Chinatown of Honiara, which has a population of 80,000.

Manasseh Sogavare said that foreign powers, opposed to the decision taken in 2019 by his government to no longer diplomatically recognize Taiwan but China, were at the origin of these disturbances.

“Unfortunately, it is influenced and encouraged by other powers …. I do not want to name names, we will stop there, we know who they are,” the Prime Minister of this Pacific archipelago told the Australian television.

Others point to the economic difficulties made worse by the Covid-19 pandemic and the historic rivalry between the inhabitants of the country’s most populous island, Malaita, and that of Guadalcanal, where the government is based.

The first members of the Australian peacekeeping force were deployed overnight from Thursday to Friday, hours after Manasseh Sogavare’s call for help.

The day before, despite the ban on going out, demonstrators took to the streets, looting businesses and running through the streets, their arms laden with crates and products, as thick black smoke rose in the air. above the city.

A spokesman for the Chinese Foreign Ministry, Zhao Lijian, on Thursday expressed his “great concern” for his country’s interests to the Solomons. He called on the government to “take all necessary measures to ensure the safety of Chinese nationals and Chinese entities.”

At the end of the 1990s, ethnic violence had broken out, part of the indigenous population of Guadalcanal attacking the inhabitants of Malaita who had come to settle on their island. Unrest had shaken the country for five years.

A Truth and Reconciliation Commission was created in 2009 to appease this ethnic violence, which lasted from 1998 to 2003.

The “tensions” had eased with the deployment in 2003 of the Regional Assistance Mission to the Solomon Islands (Ramsi), led by Australia with the help of New Zealand and 13 other countries of the Islands Forum. Peaceful.

Australian Interior Minister Karen Andrews insisted that the current deployment of the peacekeeping mission should last “a few weeks”, unlike the previous one.

“Our first objective is to restore law and order, it is certainly not to intervene in the political problems which are occurring at the moment,” she said.

Authorities in Malaita opposed this decision and continued to maintain relations with Taiwan. As a result, the province continues to receive considerable assistance from Taipei and Washington.

The premier of this province, Daniel Suidani, accused the island of Manasseh Sogavare of being in the hands of Beijing, affirming that it puts the “interests of foreigners above those of the inhabitants of the Solomon Islands”. “People are not blind to this and no longer want to be cheated,” he said.

According to experts, this geopolitical rivalry is not the only cause of the current events but it has contributed to it.

“The actions of these great powers, which are attracting the good graces of political actors, have a destabilizing effect on what is already a fragile and vulnerable country,” said Mihai Sora, Pacific specialist at the Institute. Lowy from Australia.

“And then of course, the contemporary context is that of prolonged economic difficulties due to the restrictions of the Covid, the state of emergency of the Covid,” he told AFP.

One thought on “Solomon Islands: police warning shots to disperse protesters in Honiara”