They take the Czech president back to the hospital – SME.sk 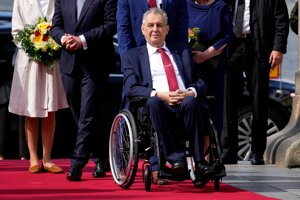 The Czech president was released from the hospital only today, he had to return.

The reason for Zeman ‘s hospitalization is a positive test for coronavirus, according to the idnes.cz server, the information was also confirmed by the president’s spokesman Jiří Ovčáček.

Related article Zeman was released from the hospital, he has no plans to return to it Read

The Czech head of state left the hospital only in the morning, even though the doctors advised him to continue his hospitalization.

The president was taken from the hospital to Lány Castle, where he was to be cared for by the Senior Home Group. Within the standards of the service provider, the president passed a test for the presence of Covid-19 in the afternoon and it was positive, said Ovčáček.

The director of the Central Military Hospital, Miroslav Zavoral, of the Seznam News portal, confirmed that Miloš Zeman had returned to ÚVN infected with a covidom.

The head of the medical council, Tomáš Zima, told Czech television ČT24 that Zeman had no symptoms of the disease. A spokeswoman for the Central Bohemian rescue service confirmed to the television that the president was in a stable condition during the transport.

Zeman was hospitalized on October 10 to worsen his chronic illness. He was originally in the ÚVN intensive care clinic and was transferred from the rehabilitation department to a long-term care bed last week.

The president recently received a third dose vaccines against Covid-19.

One thought on “They take the Czech president back to the hospital – SME.sk”