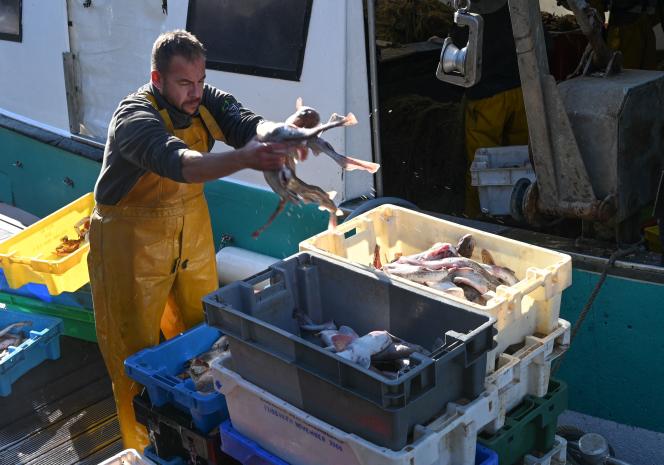 It’s the “Warning shot” which they had been announcing since the beginning of the week to demand the rapid granting by the United Kingdom of post-Brexit fishing licenses. French fishermen will carry out, Friday, November 26, operations to block goods in the ports of Saint-Malo, Ouistreham, and Calais and at the level of the Channel Tunnel, a spokesperson for the National Fisheries Committee said on Thursday.

“We don’t want handouts, we just want our licenses back. The UK must abide by the post-Brexit deal. Too many fishermen are still left behind ”, declared Gérard Romiti, the president of the National Committee during a press conference. “We’ve been waiting with our mouths open for eleven months. The patience of professionals has limits. We hope that this warning shot will be heard ”, added Mr. Romiti, not excluding, in the future, ” no action “. This movement is a response to the attitude “Provocative” and “Humiliating” of the British. “This licensing issue is the tree that hides the forest: its resolution will depend on long-term relations with the United Kingdom”, he warned.

In Calais, the port will be paralyzed from 12 p.m. to 1:30 p.m., while the Channel tunnel will be blocked at entrances and exits by means of vans, said Olivier Leprêtre, president of the regional fisheries committee for the Hauts-de -France. In Saint-Malo, the port will be blocked from 8 a.m. to 9 a.m., said his Breton counterpart, Olivier Le Nézet.

“We are disappointed with the threats of protest. It will be up to the French to ensure that illegal acts are not committed and that trade is not affected ”, reacted a spokesperson for Downing Street.

Read also Post-Brexit fishing licenses: “We will not let go of our fishermen”, promises Emmanuel Macron

Settle the dispute by December 10

For its part, the European Commission asked London on Wednesday to settle this post-Brexit dispute. “Commissioner Virginijus Sinkevicius [environnement et pêche] spoke (…) with the minister [britannique] George Eustice and insisted that the disputes over fishing licenses be concluded by 10.12.2021 “, explained one of the Commission spokespersons. “Regarding replacement vessels and Guernsey waters, work continues to find a solution by the end of the month”, he clarified.

France raised the tone and asked the Commission to be “More active” to settle this dispute. “The space for dialogue must have a deadline and this deadline the Commission must give to the United Kingdom”, declared the Minister of the Sea, Annick Girardin.

France is demanding more fishing licenses in London and the Channel Island of Jersey as part of the post-Brexit agreement signed at the end of 2020. European fishermen can continue to work in British waters provided they can prove that they fished there before. But the French and the British argue over the nature and extent of the supporting documents to be provided.

In total, since 1er January 2021, France obtained “More than 960 licenses” fishing in British waters and those of the Channel Islands, but Paris is still asking for more than 150 authorizations, according to the French Ministry of the Sea. London estimates, for its part, to have granted 98% of the licenses requested.

Read the decryption: Article reserved for our subscribers France – United Kingdom: the multiple reasons for a deep quarrel

The World with Reuters

One thought on “Fishing licenses: a first national action by French fishermen on Friday – archyde”