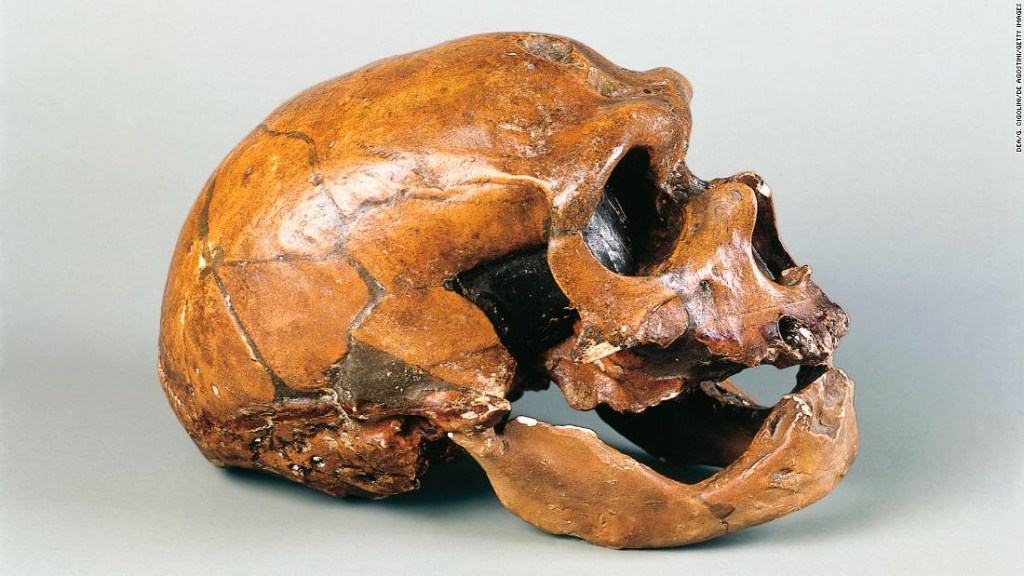 A cave gives clues about Neanderthals 0:57

(CNN) – Scientists studying ancient diseases have discovered one of the earliest examples of contagion, when a disease jumps from an animal to a human, and it happened to a Neanderthal man who likely fell ill from cutting or cooking raw meat.
Researchers were re-examining the fossilized bones of a Neanderthal found in a cave near the French village of La Chapelle-aux-Saints in 1908. The “Old Man of La Chapelle”, as he came to be known, was the first relatively complete Neanderthal skeleton. to be found and is one of the best studied.

The skull of a Neanderthal man known as the “Old Man of La Chapelle” discovered in 1908, was the first relatively complete Neanderthal skeleton to be found.

More than a century after their discovery, their bones continue to provide new information about the life of Neanderthals, the Stone Age hominids that lived in Europe and part of Asia before disappearing around 40,000 years ago.

The man, believed to be in his 50s and 60s when he died about 50,000 years ago, had advanced osteoarthritis in his spine and hip joint, as confirmed by a 2019 study.

However, during that reanalysis, Dr. Martin Haeusler, specialist in Internal Medicine and head of the University of Zurich Evolutionary Morphology and Adaptation Group at the Institute for Evolutionary Medicine, realized that not all bone changes could explained by the wear and tear of osteoarthritis.

“Rather, we found that some of these pathological changes are the result of inflammatory processes,” he said.

“Comparing the entire pattern of pathological changes found in the La Chapelle-aux-Saints skeleton with many different diseases then led us to the diagnosis of brucellosis.”

The study those results were published in the journal Scientific Reports last month.

Brucellosis is a disease that is still widespread today. According to World Health Organization (WHO), humans often contract the disease from direct contact with infected animals, from eating or drinking contaminated animal products, or from inhaling airborne agents. Most cases are caused by unpasteurized milk or cheese from infected goats or sheep.

It is also one of the most common zoonotic diseases, that is, diseases that are transmitted from animals to humans. Among them are viruses such as HIV and the coronavirus that caused the covid-19 pandemic.

Brucellosis has a wide range of symptoms, including fever, muscle pain and night sweats, Haeusler said. It can last from a few weeks to many months or even years. Long-term problems from the disease are variable, but can include arthritis pain, back pain, inflammation of the testicles – which can lead to infertility – and inflammation of the valves of the heart, known as endocarditis, which, according to Haeusler, is the most common cause of death from the disease.

The document said the case was “the first sure evidence of this zoonotic disease in hominid evolution.”
The disease has also been found in Homo sapiens skeletons from the Bronze Age, dating to around 5,000 years ago.

Brucellosis is found in many wild animals today, and Haeusler said Neanderthal man likely contracted the disease by butchering or cooking an animal that had been hunted for prey. Possible sources include wild sheep, goats, wild cattle, bison, reindeer, hares, and marmots, all components of the Neanderthal diet. However, the article states that the two large animals that Neanderthals hunted, mammoths and woolly rhinos, are unlikely to be the reservoir for the disease, at least based on the living relatives of these animals, in which brucellosis has not been detected.

Since the man lived to a very old age for the time, Haeusler suspects that the Neanderthal may have suffered from a milder version of the disease.

The “Old Man of Chapelle” played a major role in the misconceptions that Neanderthals were primitive Stone Age brutes, according to the Smithsonian. More recent research suggests they were just as smart as we are.

An early reconstruction of the skeleton showed the man in a stooped posture, with his knees bent and his head tilted forward. Only later did scientists realize that the skeleton had a deforming type of osteoarthritis and that it was perhaps not a typical Neanderthal.

Haeusler said the study he published in 2019 showed that even with the wear and tear of degenerative osteoarthritis, “Old Man Chapelle” would have walked upright. The man had also lost most of his teeth and may have had to be fed by other members of his group.