In Guadeloupe, the “general strike” struggles to mobilize a large part of the population 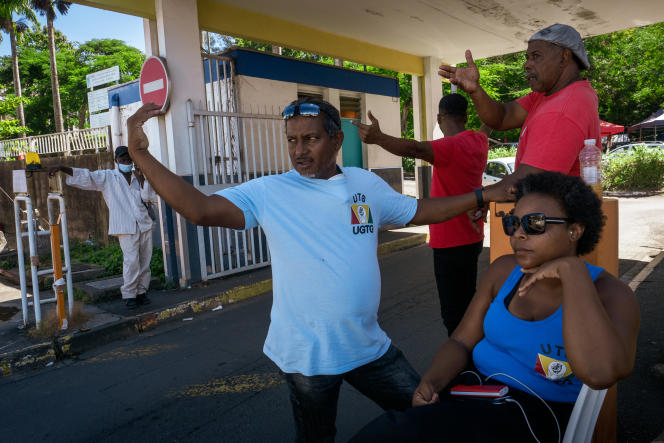 The call for a ” general strike “ to protest against the vaccination obligation of caregivers and the health pass, launched in Guadeloupe on November 15, continues to expand in overseas communities. After Martinique, Monday, November 22, an inter-union announced a walkout in several sectors in French Polynesia, Thursday, November 25, based on similar demands: firstly, the reinstatement of employees suspended for refusing to do so. vaccinate against Covid-19, before opening negotiations on broader social issues, including increasing wages and purchasing power.

In French Polynesia, the movement mobilizes little, for the moment, in the public service: less than 1% of Polynesian education and administration employees have gone on strike – a slightly higher rate is observed in private. In Martinique, the General Confederation of Labor of the island has ensured that ” more than 1,500 people ” participated in the strike initiated since Monday by the unions. The scale of the mobilization is also at the center of discussions in Guadeloupe, where the authorities are contesting protesters’ right to speak for the entire population.

Read also Article reserved for our subscribers In Guadeloupe and Martinique, reluctance towards the vaccine is mixed with mistrust of the word of the State

“There is a recalcitrant minority which cannot take an entire island hostage, a violent minority which cannot prevent women and men from seeking treatment”, said the spokesman of the government, Gabriel Attal, during the report of the Council of Ministers, Wednesday, in a reference to the roadblocks erected on the roads of Guadeloupe and disrupting traffic for a week. “The State services continue to mobilize tirelessly to quickly achieve a return to calm which the vast majority of Guadeloupeans aspire to”, also announced the prefecture of the archipelago, Thursday, specifying that ten arrests had taken place during the night.

“Agree on the substance, not on the form”

In fact, the ” general strike “ ambitioned by the demonstrators does not exist in Guadeloupe. If part of the economic activity is disrupted by the dams, the mobilization is much less massive than the popular movement against the high cost of living in 2009. “The roadblocks prevent people from joining the protests”, explains Eric (who did not wish to communicate his last name), resident of Baie-Mahault who came to participate in the first “General march” organized since November 15.

You have 56.66% of this article to read. The rest is for subscribers only.

One thought on “In Guadeloupe, the “general strike” struggles to mobilize a large part of the population”