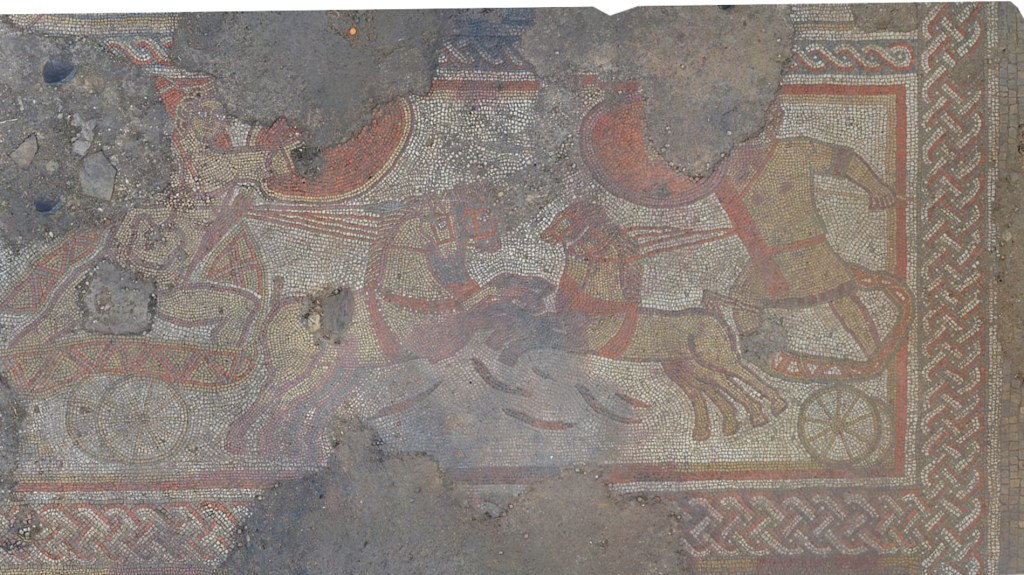 (CNN) – A rare roman mosaic It was unearthed on a British farm in a discovery labeled “extraordinary”.
Historic England, a public body that looks after the country’s historic environment, said it was the first time the mosaic, found in Rutland, East Midlands, has been seen in 1,600 years.

The Roman mosaic is the first of its kind found in the UK depicting the Greek hero Achilles’ battle against Hector during the Trojan War, and is one of “a handful” of specimens found in Europe, Historic England said in a statement. press release this Thursday.

Jim Irvine, the son of the landowner, detected “unusual pottery” in a wheat field during England’s lockdown from the coronavirus last year and alerted local authorities.

The archaeologists The Archaeological Services of the University of Leicester, together with Historic England and the Rutland County Council, excavated the site and discovered the mosaic, which measures 11 meters by 7 meters.

Archaeologists take notes during the excavation of the mosaic. Credit: Historic England Archive

The artwork forms the floor of what is believed to have been a dining room or entertainment area in a large villa. The building was occupied in late Roman times, between the 3rd and 4th centuries.

Historic England claims that the complex, which has now been granted protected status, was likely owned by a wealthy individual with a knowledge of classical literature.

“To have discovered such a rare mosaic of this size, as well as a surrounding villa, is remarkable,” Duncan Wilson, executive director of Historic England, said in the press release.

“Discoveries like this are very important in helping us rebuild our common history. By protecting this historic site we can continue to learn from it, and we look forward to what future excavations can teach us about the people who lived there.”

The Roman villa is surrounded by other buildings of the time discovered during a geophysical study.

Among them are barns, possible toilets and a series of delineation ditches.

The room is part of a large villa, the scale of which is captured here, believed to have been occupied between the 3rd and 4th centuries. Credit: Historic England Archive

Human remains dating from late Roman or early medieval times were also found at the site, and were buried there after the mosaic.

Historic England states that the bodies were likely buried when the building was no longer occupied, and that fire damage to the mosaic suggests that the complex was repurposed.

Britain has a rich historical Roman past.

Last month, archaeologists at Stoke Mandeville, in Buckinghamshire, in south-eastern England, uncovered a set of “amazing” roman statues and rare of a man, a woman and a child. A Roman hexagonal glass jug was also discovered, presumed to be over 1,000 years old.

In another archaeological dig in April, the remains of a complex of “high-end” Roman buildings were discovered during construction work on a new development in Scarborough, northern England.

One thought on “Rare Roman mosaic found on UK farm”