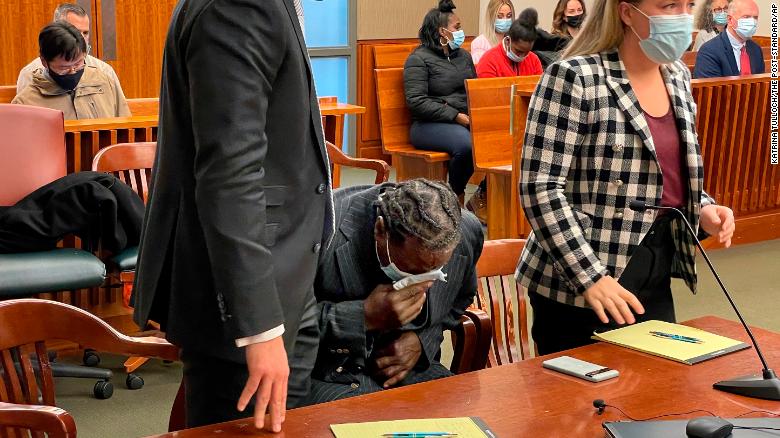 (CNN) – For decades throughout his years in prison and even after his release, Anthony Broadwater insisted that he was innocent of the rape of “The Lovely Bones” author Alice Sebold, a crime she described in her memoir, ” Lucky “.
Convicted in 1982, Broadwater spent more than 16 years in prison. He was denied parole at least five times because he refused to admit to a crime he had not committed, according to his attorneys. And he passed two lie detector tests.

Broadwater, 61, tried five times to have the conviction overturned. And even after being released, he didn’t give up. But he did not succeed, until Monday, when New York State Supreme Court Justice Gordon Cuffy overturned the rape conviction and other related charges.

The Onondaga County Prosecutor joined the petition for annulment of the sentence.

Sebold described the rape, which occurred when she was a freshman at Syracuse University in 1981, in minute detail in her memoirs. It was published in 1999, the year following Broadwater’s release from prison.

Almost five months after being raped, Sebold saw Broadwater on the street in Syracuse. He reminded him of the rapist and reported the encounter to police, according to Broadwater’s attorneys. But later, he was unable to identify Broadwater in a police reconnaissance parade.

Broadwater was convicted on the basis of two pieces of evidence: Sebold’s account (an interracial identification, as the author is white and Broadwater is black) and the analysis of a piece of hair that was later found to be defective, his attorneys wrote.

“Research has found that the risk of misidentification by eyewitnesses is significantly increased when the witness and the subject are of different races,” the claim held.

Regarding hair analysis, in 2015, “the FBI testified that microscopic hair analysis contained errors in at least 90 percent of the cases the agency reviewed,” according to the attorneys’ statement.

“We now know that the forensic chemist’s testimony derived from a widely discredited forensic approach to hair microscopy,” the statement states.

In “Lucky,” Sebold wrote that “a detective and a prosecutor told her after the recognition round that she had picked the wrong man and how the prosecutor deliberately trained her to restore her misidentification,” according to the claim.

CNN contacted Sebold and his publisher multiple times for comment.

The unreliability of the hair analysis and the conversation between the prosecutor and Sebold after the recognition conference would likely have led to a different verdict had they appeared at trial, the attorneys said.

“I’m not going to smear this process by saying I’m sorry,” Attorney General William Fitzpatrick said in the courtroom. “That doesn’t work. This should never have happened.”

Broadwater burst into tears when the judge announced his decision.

Anthony Broadwater burst into tears after a judge cleared him of a decades-old rape conviction.
(Katrina Tulloch / The Post-Standard via AP)

“When the district attorney spoke to me, his words were so deep, so strong, they shook me,” Broadwater told CNN on Wednesday. “It made me cry with joy and happiness because a man of this magnitude said what he said in my name … it is, it is beyond what I myself can say.”

Upon his release, Broadwater remained on a sex offender list. He described how the conviction had ruined his life.

He had a hard time finding a job coming out of jail when employers found out about his criminal record.

“I did what I could, and that was, you know, creating a job for myself gardening, removing trees, transporting, cleaning,” he said.

His wife wanted to have children, but “she did not want to bring them into the world because of this. And now, those days are over, we cannot have children”, Broadwater told reporters after the court hearing.

The couple met in 1999, about a year after he was released from jail, he told CNN. After their first date, he gave her the transcripts and other documents of his case, telling her to read them and decide if she wanted to be with him.

Part of the reason Broadwater attorneys J. David Hammond and Melissa Swartz became involved in the case is because of Tim Mucciante, who was involved in a project to develop a film adaptation of “Lucky.”

Mucciante “had doubts that the story was the way it was portrayed in the film,” Hammond said, prompting him to hire a private investigator associated with his law firm.

“It didn’t take us long to find out and we realized there was something here,” Hammond said. He and Swartz listened to the trial transcript and encountered “serious legal problems,” prompting them to file a motion, he said.

Hammond and Swartz are at least the fifth group of attorneys he hires to help him with his case, Broadwater said.

“I never gave up. I could never, never give up and live in these conditions … I was going to do everything I could to prove my innocence,” he commented.

Days after the judge’s decision, Broadwater said “It feels so surreal, I’m still taking it in. I’m kind of … scared in a way. I’m very happy.”

As for Sebold, Broadwater said he would like an apology.

“I sympathize with her, with what happened to her,” he said. “I just hope there is a sincere apology. I would accept it. I am not bitter or wish him ill.”