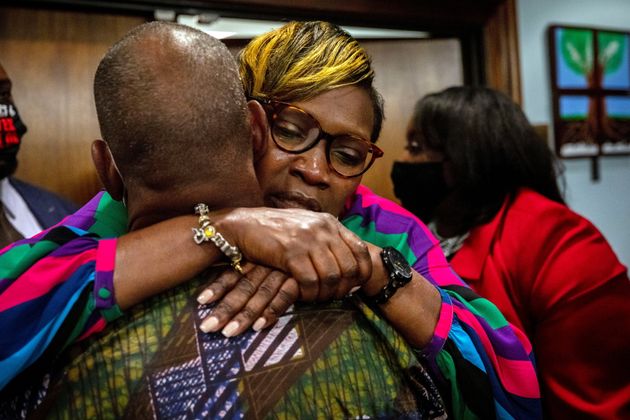 UNITED STATES – Three white Americans were found guilty on Wednesday, November 24 of the murder of the African-American jogger Ahmaud Arbery, whom they had prosecuted and then shot dead in February 2020 in the state of Georgia, following a trial marked by the issue of racism.

President Joe biden immediately greeted The verdict, while recognizing that “a lot of work” remained to be done before achieving equality.

Nothing can bring Mr. Arbery back to his family and to his community, but the verdict ensures that those who committed this horrible crime will be punished. https://t.co/WK7vNZlZfj

Travis McMichael, 35 and the author of the fatal shots, his father Gregory McMichael, 65, and their neighbor William Bryan, 52, who participated in the chase, were on trial in Brunswick, in the southern state of the United States. United, following this tragedy that fueled the major anti-racist demonstrations in the summer of 2020 across the country.

The twelve jurors, including one black man, deliberated for more than eleven hours to reach this unanimous verdict. The announcement was greeted by protesters who chanted Ahmaud Arbery’s name outside the courthouse. In the room, a family member shouted for joy when Travis McMichael was convicted.

Leading civil rights organization ACLU welcomed the judgment, noting in a statement that the real challenge was to create a society where whites and African Americans like Ahmaud Arbery could live without fear of racist violence.

On February 23, 2020, the 25-year-old was jogging in the coastal town of the southeastern United States when he was chased by the three men in their cars. After an altercation, Travis McMichael opened fire and killed the jogger.

The three defendants then assured to have taken him for a burglar operating in the vicinity and had invoked a law of Georgia then authorizing ordinary citizens to make arrests. A video of the drama, released nearly three months later, scandalized the United States and Ahmaud Arbery had become an icon of the anti-racist movement Black Lives Matter.