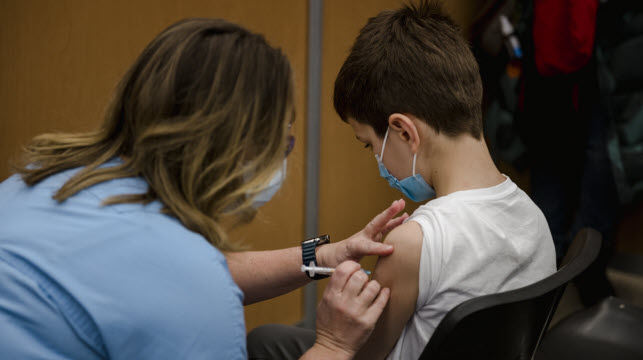 The main information at midday

The Covid-19 has caused the death of more than 1.5 million people since the start of the pandemic in Europe, where several countries are reinstating restrictions to contain record contamination, according to an AFP count made from official reports this Thursday.

Some 1,500,105 deaths have been officially recorded in the European region (52 countries and territories ranging from the Atlantic coast to Azerbaijan and Russia) since the first death on the continent in February 2020. The number of new deaths is up since mid-July (4,210 per day on average over the last seven days, + 1% over one week) in the area, again the epicenter of the pandemic.

11:40 am: In Israel, government plans fourth dose of vaccine

The health minister said on Wednesday that a fourth dose of the coronavirus vaccine is being considered to make up for the fifth wave, according to i24 news. “It is not unreasonable to think that we will need a fourth vaccine,” Nitzan Horowitz said in an interview with Channel 12, after data from the Department of Health revealed that 9% of new cases diagnosed Tuesday had received the third booster dose.

Some 8,500 classes were closed in France on Wednesday according to the latest figures from the Ministry of National Education revealed by BFMTV.

The last known figure was that of Tuesday with 6,000 closed classes.

On the occasion of Olivier Véran’s announcements this Thursday noon, the rule could be ended: a case in a primary class, the closed class.

The device which should be put in place from the middle of next week in schools it is that of: if a positive case is confirmed in a class in primary then all the students are tested and only those who will be negative will be able to stay in class. The positive cases will take place at a distance.

Olivier Véran at 20H of TF1

The Minister of Health Olivier Véran will be the guest of the JT at 8 p.m. on TF1 this Thursday. He will detail the measures he must announce this Thursday noon to counter the fifth wave of Covid-19 in France.

9:58 am: A vaccine booster recommended for everyone over 18 years old from 5 months after the second dose

The High Authority of Health (HAS) recommends a vaccination booster (3rd dose) for all over 18 years from 5 months after the injection of the second dose.

“It also remains necessary to combine vaccination with strengthening adherence to barrier gestures at a high level, given the interest of these measures in containing the Covid-19 epidemic (and infections with other winter viruses ) in order to preserve the healthcare system and avoid restrictive measures “writes the HAS.

According to an Odoxa and Blackbone consulting survey for Le Figaro newspaper, 78% of French people adhere to the principle of the third dose. 53% of them even say they are ready to receive this third dose as quickly as possible.

8:42 am: Partial confinement in Slovakia

Slovakia, which has one of the highest coronavirus contamination rates in the world, announced the closure of non-essential restaurants and stores from Thursday, while schools will remain open.

7:32 am: Beginning of childhood immunizations in Canada

Vaccination against Covid-19 for 5-11 year olds began Wednesday in Canada, which followed in the footsteps of the United States and Israel by lowering the age of access to the vaccine to curb the pandemic.

Some 359,975 appointments were made on Wednesday for the booster dose of the Covid-19 vaccine (third dose) on the Doctolib reservation platform. The previous record was 218,000 appointments made Tuesday according to Doctolib.

6:53 am: Acceleration of recalls in Portugal

Portugal plans to vaccinate a quarter of its population, or 2.5 million people, with a booster dose of the Covid vaccine by the end of January. Some 800,000 people have already received a third dose.

6:44 am: Delta reduces effectiveness of vaccines against transmission

The highly contagious Delta variant has reduced the effectiveness of vaccines against the transmission of the disease to 40%, the WHO boss said on Wednesday, recalling the importance of barrier measures. “Vaccines save lives, but they do not completely prevent the transmission of Covid-19”, explained Tedros Adhanom Ghebreyesus. “There is data that suggests that before the arrival of the Delta variant, vaccines reduced transmission by about 60%, with Delta this dropped to 40%,” he said.

Martinique: multiplication of roadblocks on the third day of the general strike

The situation worsened Wednesday evening in Martinique, on the evening of the third day of the general strike, with the multiplication of roadblocks on the main roads of the island shaken like its neighbor Guadeloupe by a challenge to the compulsory anti-Covid vaccine, which turns to violence in some neighborhoods. A meeting is scheduled this Thursday morning between the members of the intersyndicale and the prefect and the president of the executive council (of the Territorial Collectivity of Martinique Serge Letchimy).

More than 100,000 people, 100,119 to be exact, have died from the coronavirus in Germany since the start of the pandemic. In one day, the health authorities also recorded 75,961 new contaminations, a new record high at a time when the largest European economy fears a saturation of hospitals. The seven-day incidence also reached a record high at 419.7.

5:50 am: The executive announces this Thursday new measures to slow down the fifth wave

The Minister of Health Olivier Véran will present at 12:30 p.m. new measures to deal with the fifth wave of the epidemic. Hardening of the sanitary pass, third dose generalized and authorized from five months, reinforcement of the wearing of the mask… We take stock in our article on the main orientations that will be unveiled by the government.

5:47 am: WHO says Delta variant reduces vaccine effectiveness against transmission

The highly contagious Delta variant has reduced the effectiveness of vaccines against the transmission of the disease to 40%, the WHO boss said on Wednesday, recalling the importance of barrier measures. “Vaccines save lives, but they do not completely prevent the transmission of Covid-19”, explained Tedros Adhanom Ghebreyesus. “There is data that suggests that before the arrival of the Delta variant, vaccines reduced transmission by about 60%, with Delta this dropped to 40%,” he said.

The number of new Covid-19 cases continued to rise on Wednesday. According to figures from Public Health France, 32,591 new contaminations were recorded, the highest number since April 24. The positivity rate remained stable at 4.9%.

Resuscitation services welcomed 1,483 Covid-19 patients on Wednesday, with 137 new admissions in 24 hours. A total of 8,765 people were hospitalized, with 770 new admissions.

What to remember from Wednesday

5:45 am: Hello everyone and welcome to this live stream dedicated to the news of the Covid-19 pandemic in France and around the world.

One thought on “Live | Covid-19: nearly 360,000 appointments made Wednesday on Doctolib for the 3rd dose – DNA – Latest News from Alsace”