Groups of thieves rob two other luxury stores in California 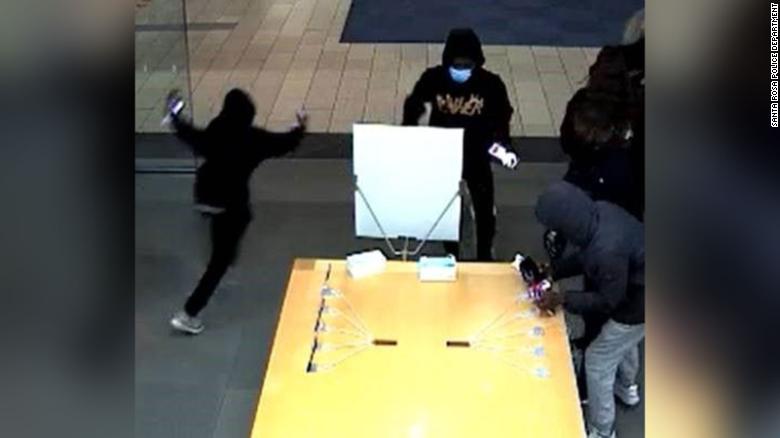 (CNN) – Groups of thieves stole goods from two luxury stores in California on Wednesday, according to authorities, in the latest chapter in a series of similar robberies in some cities across the United States.

During the robbery, the suspects assaulted and pepper-sprayed a security guard, Deputy Chief Alan Hamilton said. At least one of the suspects was wearing an orange wig, KABC reported. CNN has reached out to the Los Angeles Police Department for more information.

Also Wednesday, police said at least four people stole $ 20,000 worth of merchandise from an Apple store in Santa Rosa, which is nearly 90 kilometers north of San Francisco.

An image from surveillance cameras shows a theft on November 24, 2021 at an Apple Store in Santa Rosa, California.

“In a blatant daytime robbery in front of customers and staff, the suspects seized more than $ 20,000 worth of merchandise from the store and fled the area in an unknown vehicle,” Santa Rosa police said in a statement.

The suspects were between 14 and 18 years old and wore masks, police said.

The hit-and-run thefts come amid a recent wave of so-called “smash and grab” crimes.

On Monday, at least 18 people broke into the Nordstrom department store in the Grove in Los Angeles and stole thousands of dollars in merchandise, said Los Angeles Police Department Chief Michel Moore. Three people were arrested, he added.

In the San Francisco Bay Area, a group of thieves invaded the Southland Mall in Hayward Sunday night, wielding hammers to break boxes at a jewelry store before grabbing items and fleeing. And east of San Francisco, three suspects were arrested Saturday night after a mob ransacked a Nordstrom department store in Walnut Creek.

In the Chicago suburbs, 14 people broke into a Louis Vuitton store last week and fled with more than $ 100,000 in bags and other merchandise.

CNN’s Andy Rose and Stella Chan contributed to this report.