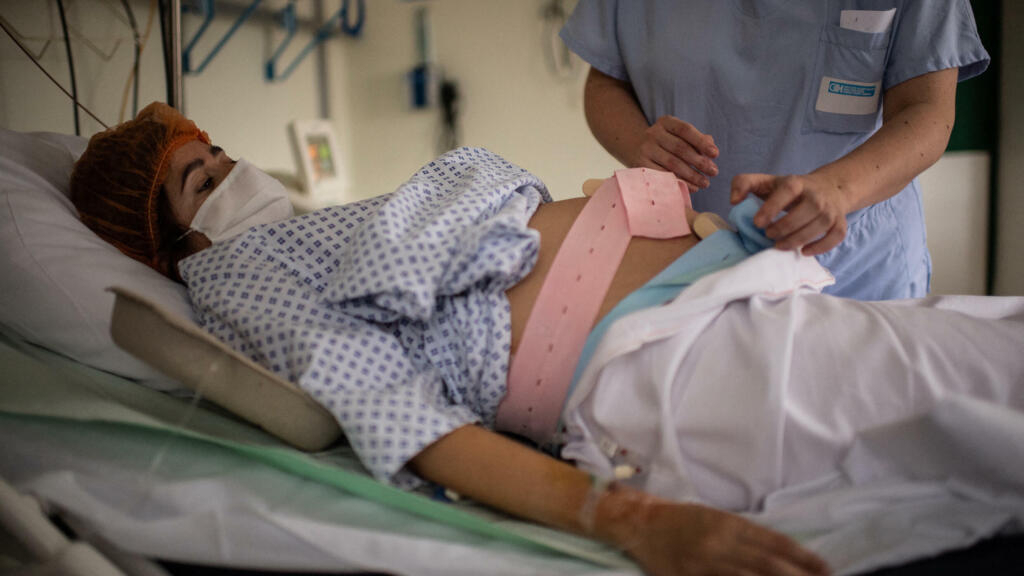 In the wake of the #MeToo movement, a wave of poignant testimonies from women has arisen in France denouncing cases of sexual harassment or abuse they have had to face in maternity wards or at the gynecologist. While an investigation for rape was opened against a famous Parisian practitioner, what means are implemented to fight against mistreatment? The France 24 survey.

In an ocean of purple banners, one of the colors used by activists to symbolize loyalty and dignity, tens of thousands of people marched through the streets of Paris to condemn violence against women, Saturday, November 20.

Since September, a total of seven women have filed official complaints against the famous Parisian gynecologist Émile Darai, who stepped down as head of the Endometriosis Center at Tenon Hospital on October 8. In addition to these complaints, Stop VOG has received an avalanche of testimonials from women on social media.

But if a judicial investigation is underway, little has been done to fight against obstetric and gynecological violence in France.

“Rape does not only take place in a dark subway, by a stranger holding a knife”, explains Sonia Bisch to France 24. “It takes place within families, couples and in gynecological offices or in maternity hospitals by the doctors themselves … Unfortunately, medicine is not exempt from these things that are happening in society. “

Obstetric and gynecological violence occurs when a health professional adopts behavior or practices that are not medically justified or consented to by the patient. “It can take place during an abortion, in vitro fertilization, a pregnancy test or childbirth – and it can be physical, psychological or verbal,” says Sonia Bisch.

For Aurore, 32, it happened during her very first visit to the gynecologist. She was 16 years old and her GP had told her to have her gynecologist examined because she had reported irritations. While she was already nervous about being examined under such intimate circumstances, Aurore was greeted with haste. “The gynecologist was obviously very annoyed that I hadn’t seen someone sooner. When he entered the room he said ‘Hello’ and immediately told me to undress,” she recalls. .

“I took off my pants, sat on the examination table and started to cry,” she explains, remembering how scared and stressed she was at the time. “He started and I squeezed my knees, I didn’t want to continue. He examined me with a swab to take a sample and performed a vaginal exam with his fingers. The whole time I was crying, shaking my head, I said no. I didn’t understand what was going on. I wasn’t prepared. “

The doctor continued despite Aurore’s repeated attempts to stop the consultation. Years later, when she asked for her chart, she discovered that the doctor had also performed a vaginal ultrasound. “I was so shocked at the time, I didn’t even notice what was going on,” she says. It turned out that Aurore had a simple infection (yeast infection). She did not realize until years later that she could have treated herself by going to the pharmacy. But more importantly, she understood that she had been raped.

According to the Kouchner law of 2002, doctors must seek consent from patients before performing any medical procedure. If they do not do so and perform an act of sexual penetration “by violence, coercion, threat or surprise”, this act is considered rape in France, according to article 222-23 of the Penal Code.

The cases of obstetric and gynecological violence made the headlines in France in 2014, when women used the hashtag (hashtag) # PayeTonUtérus to denounce on social networks the harassment or sexual abuse they faced during health check-ups. health or exams.

Three years later, Marlène Schiappa, then Secretary of State for Equality between Women and Men, commissioned a report on these types of abuse. The report, published in June 2018, reveals that the violence committed by obstetricians and gynecologists in France was indeed systemic and not limited to a few isolated cases.

Some forms of abuse have been found to be more common than others, such as performing episiotomies (surgical incision of the perineum) without the patient’s consent, performing vaginal stitches without anesthesia, and using fundal pressure. (pressure on the uterus) to speed up childbirth, a practice strongly discouraged by the High Authority for Health (HAS) since 2007.

The report also pointed to a general contempt for women’s pain and a lack of communication about medical acts. This is what Sandrine *, 40, experienced when her second child was born. As the due date approached and she still had no contractions, she began seeing a new gynecologist regularly to monitor her pregnancy.

During one of these visits, Sandrine suffered a painful vaginal examination, without warning. “It hurt me a lot,” she recalls, not forgetting this former midwife in Paris who always asked permission before performing this act. The gynecologist then continued her examination and did something that Sandrine “did not like at all”.

“She moved her fingers, trying to pull something, but she wasn’t telling me what she was doing… I really couldn’t take the pain and felt like something was different. asked to stop what she was doing and she immediately stopped, “she continues. Sandrine discovered that, without her consent or any communication, the gynecologist had tried scanning the membranes to induce labor, since the baby was late.

“I think the biggest problem is not asking women for their approval and not preparing them mentally for the pain they are going to feel,” says Sandrine, echoing Sonia Bisch’s comments that, in 2021, women in France should not leave medical offices or maternity hospitals feeling “tortured or raped”.

Too little, too late

Since the publication of the 2018 report, the French government and other medical authorities have done little to combat obstetric and gynecological violence. Worse, the Order of Physicians, in charge of drafting the Code of medical ethics and processing complaints, was criticized in 2019 by the Court of Auditors. She deplored the disastrous treatment of patient complaints.

“Three and a half years later, nothing happened. It is too little. There is a charter and that’s all,” says Sonia Bisch, referring to the charter of good practices published by the College National of French Gynecologists and Obstetricians (CNGOF) and in response to accusations against Émile Daraï.

France 24 asked Isabelle Héron, president of the National Federation of Colleges of Medical Gynecology (FNCGM), if the institution planned to do more. The doctor assured that the charter was “only part of the answer” and that it consists in reminding doctors how to carry out a pelvic examination, by putting “the notion of consent at the center of the consultation”. This document will be displayed in the waiting rooms, so that the patients “know that this charter has been published”, specifies Isabelle Héron.

“But above all”, she adds, the best solution is “to educate our young people”.

For Sonia Bisch, this is not enough. “If the violence could be stopped by sticking pieces of paper on the walls, there would be no need for (feminist associations) to campaign against feminicides. All we would have to do is stick on the walls. walls of violent husbands leaves telling them not to kill their ex-wives, ”she laments.

“We need a control of medical practices … It is necessary that health professionals, students, police officers and lawyers are trained in the matter, so that they understand the consequences of this violence”, continues Sonia Bisch. Before concluding: “Expressing yourself is not enough. People have to listen. When you don’t listen to the victims, it’s as if they aren’t speaking at all.”

* The first name has been changed to ensure anonymity

Adapted from the original English version by Nicolas Bamba.