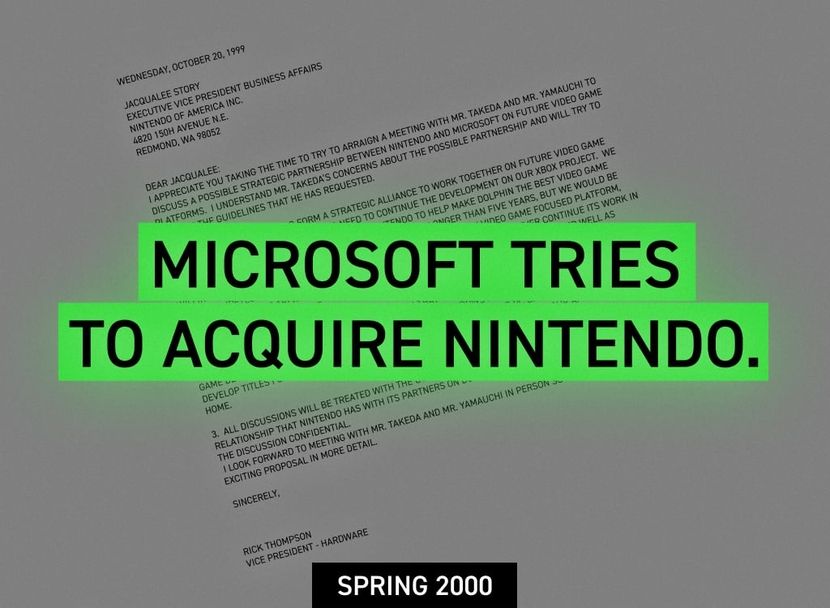 The document identified by Kotaku is unfortunately only very partially readable, but it is Microsoft itself who made this little piece of history available to the public as part of its personalized virtual museum that each user of the brand can browse at this address. Signed Rick Thomson, senior vice president of Xbox at Microsoft, the letter is addressed to Jacqualee Story, who worked at Nintendo of America from 1990 to 2014 as head of commercial affairs, and mentions a future meeting between Microsoft pundits and Nintendo representatives, namely Hiroshi Yamauchi and Genyo Takeda.

At this still early stage of discussions, the letter seems to only mention a “strategic alliance” through which Microsoft would help Nintendo on its future Dolphin (code name for the GameCube) without giving up the Xbox project, but we knows that Microsoft did make a purchase offer to Nintendo afterwards, just as it had also tried to grab publishers like Squaresoft and Electronic Arts.

“Steve (Ballmer) took us to Nintendo to see if they were considering an acquisition. They just burst out laughing. Imagine someone laughing at you for a whole hour. This is a bit like how the meeting went“, testified Kevin Bachus, then in charge of the delicate task of establishing relationships with third-party publishers.

“We had received Nintendo in January 2000 to work on the details of a joint venture and give them all the technical information of the Xbox. The idea was that their hardware sucked compared to the PlayStation. So the proposal was to give them the development of the games while Microsoft took care of the hardware.“, added Bob McBreen, then head of business development. According to the latter, there were still no less than seven meetings between Microsoft and Nintendo.