VIDEO. Accusations of sexual violence against Nicolas Hulot: Marlène Schiappa calls for “that the – Franceinfo 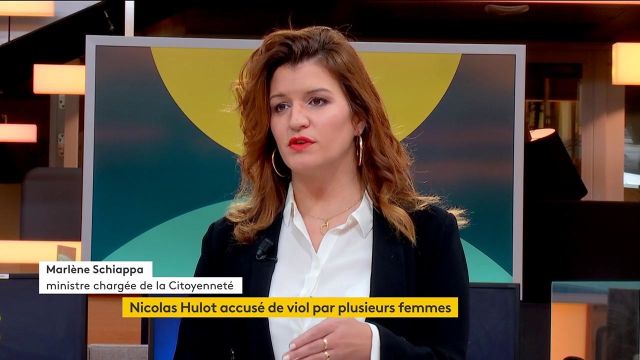 Before the broadcast of the program “Special Envoy” implicating him, Nicolas Hulot had announced that he was “definitely leaving public life”.

The Minister for Citizenship speaks on the Hulot affair. “If there are elements which implicate Nicolas Hulot, I hope that justice can open an investigation”, Marlène Schiappa said on Franceinfo, Thursday, November 25, before the broadcast of an issue of “Special Envoy” in which several women accuse him of sexual assault and rape.

“I would like to send a message of support to all women who have experienced rape or sexual assault”, first underlined Marlène Schiappa, before recalling the possible legal proceedings that could be opened after these revelations. “I have heard it said a lot that there is a statute of limitations for these charges. I remind you that it is neither for journalists nor for those accused of rape to say whether or not there is a statute of limitations. Only a judge can establish the prescription “, she clarified.

Before the broadcast of the program implicating him, Nicolas Hulot announced, Wednesday, November 24 on BFMTV, that he was leaving “definitely public life”, by fiercely denying these accusations of rape and sexual assault. He explained that he wanted to protect his loved ones and his foundation from the fallout from “lynching” which he claims to be the object of.

One thought on “VIDEO. Accusations of sexual violence against Nicolas Hulot: Marlène Schiappa calls for “that the – Franceinfo”