Martinique: the inter-union at the origin of the general strike calls for the lifting of dams – archyde 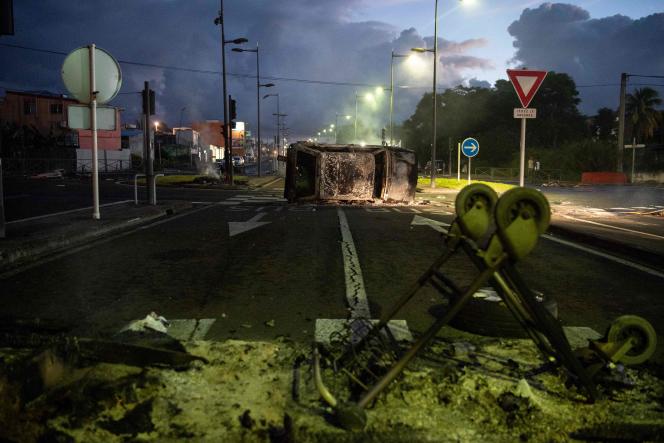 In Martinique, the inter-union at the origin of the general strike launched on Monday is trying to calm the situation. The inter-union “Met and analyzed the situation, and taking into account (…) from what we have seen throughout this day, (…) the intersyndicale decided this evening to lift the roadblocks ”, announced Bertrand Cambusy, secretary general of the Central Syndicate of Martinican Workers, on the night of Tuesday 23 to Wednesday 24 November on Martinique La 1ère.

Union representatives say they have taken this decision to avoid the risk of conflagration, as in Guadeloupe, where violence, of a magnitude greater than that of Martinique, continued on Tuesday. The inter-union appeal does not guarantee that all roadblocks will be lifted quickly, some of them being manned by non-union people.

Read also Article reserved for our subscribers In Guadeloupe and Martinique, reluctance to vaccine is mixed with mistrust of the word of the State

Despite this announcement, violence again took place on the island overnight from Tuesday to Wednesday. Nine members of the security forces were injured, including five mobile gendarmes, according to the gendarmerie, and four police officers. All were injured during clashes in the district of Sainte-Thérèse, in Fort-de-France, already the scene the previous night of shots targeting the security forces.

“Two individuals were arrested in Schoelcher after a motorcycle gang opened fire on the gendarmes who were holding a road check at Jaham point”, according to the gendarmerie.

On Tuesday, the Fort-de-France prosecutor’s office opened an investigation after law enforcement and firefighters were the target of gunfire Monday evening, in a popular district of Fort-de-France, without causing any injuries.

Since Monday morning, the road network has been severely disrupted, with roadblocks blocking the main axes, especially on the outskirts of the major sectors of activity of Lamentin, located in central Martinique, south of Fort-de-France.

The movement began to demand the suspension of the vaccine obligation, but advances various demands. Since Monday morning, the road network has been severely disrupted, with roadblocks blocking the main roads, especially around the major sectors of activity of Lamentin, located in central Martinique, south of Fort-de-France.

Read our report: Article reserved for our subscribers In Guadeloupe, the social conflict at an impasse after the maintenance of the vaccination obligation of caregivers

In Guadeloupe, a neighboring island, the curfew has been extended until November 28. The Board of Interns in Guadeloupe announced in a statement on Wednesday that they were exercising their right of withdrawal, citing a “Imminent danger” facing the“Growing insecurity” and to ” threat “ when they go to their place of work. “The interns will return to their posts when their safety is once again assured”, they let it be known.

To calm the situation, Mr. Castex announced on Monday the creation of a “Forum for dialogue” in order to “Convince and [d’]support individually, humanely ”, professionals concerned by the vaccination obligation. A decision that has not convinced Guadeloupe.

The night from Monday to Tuesday was marked by live ammunition against the police, and the Minister of the Interior, Gerald Darmanin, made the restoration of public order “The prerequisite for any discussion”. On Wednesday, the Minister of the Economy, Bruno Le Maire, also affirmed that “Compulsory vaccination for nursing staff (…) is not negotiable “, and “The health pass (…) no more “. “We are not going to negotiate the health security of the French”, did he declare on Franceinfo.

Government spokesman Gabriel Attal, for his part, denounced a “Recalcitrant minority” and “Violent” who takes “A whole island held hostage”. He added that the government would continue its “Mobilization” and that the overseas minister, Sébastien Lecornu, would visit the island “As soon as the conditions are met”.

The protest movement against compulsory vaccination against Covid-19 for nursing staff and firefighters began on November 15 in Guadeloupe, with a call for a general strike by a collective of trade union and citizen organizations who are also calling for the rise in wages and social minimums and fall in fuel and gas prices.

One thought on “Martinique: the inter-union at the origin of the general strike calls for the lifting of dams – archyde”