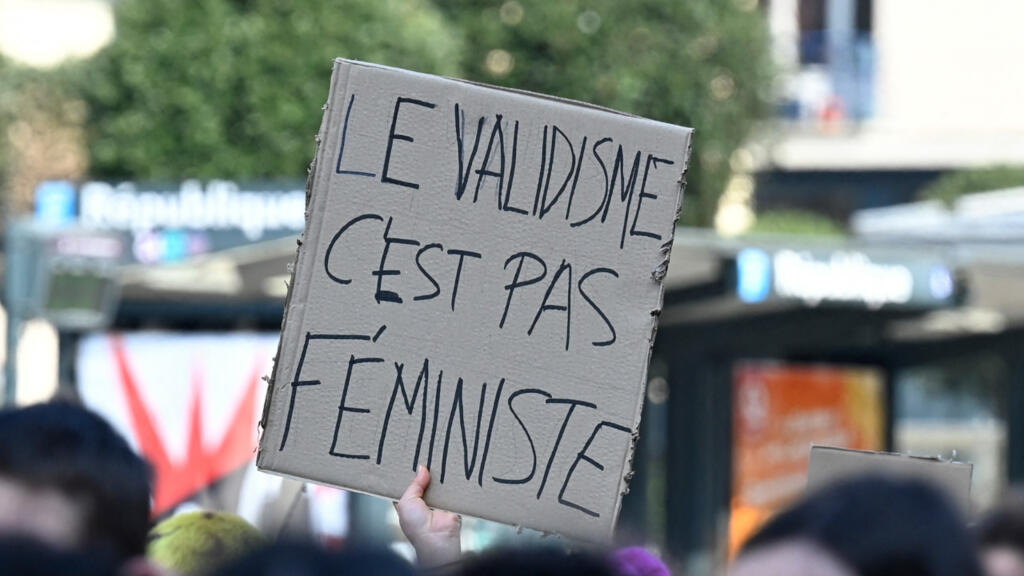 Without a #MeTooHandicap movement to relay their testimonies on social networks, and without the support of the main feminist militant organizations to bring their voice to the streets, disabled women victims of gender-based and sexual violence remain in the blind spot of the fight against violence made to women. A phenomenon passed over in silence by excess of validism, and absence of political action.

More exposed, even less heard. Four years after the emergence of the #MeToo and #BalanceTonPorc movements, women with disabilities who are victims of gender-based and sexual violence remain under-represented, including within feminist actions. As for a possible #MeTooHandicap, it is struggling to develop, to the chagrin of the handi-feminist associations which work, in particular, to ensure that the words of victims benefit from the same echo as that of valid victims.

Today, “studies are few and far between, because the subject is not of interest”, points out Céline Extenso, co-founder of the handi-feminist association Les Dévalideuses. Constructed in relation to the term “valid”, often used in opposition to a disabled person, validism is characterized, according to the Fight and Handicaps Collective for Equality and Emancipation, “by the conviction on the part of able-bodied people that their lack of disability and / or their good health gives them a more enviable and even superior position than that of disabled people.”

The figures available to date, however, are telling: according to the Insee Living Environment and Security survey from 2011 to 2018, known as “victimization” (study of criminal phenomena which is primarily interested in the person of the victims). ), during the two years preceding the study, women with disabilities were twice as likely to have suffered sexual violence than women without disabilities (4% against 1.7%). Of the analysis of this survey emerges that “being with a disability increases, all other things being equal, the probability of having been physically or sexually abused (+4.8 points), that this violence was committed outside the household (+3 points) or within it (+2.4 points). “

More recently, an unprecedented survey carried out at the local level by the Regional Observatory of Sexist and Sexual Violence of Nouvelle Aquitaine, supported by the State and the results of which have been revealed by independent media The Conversation, shows that women with disabilities are particularly vulnerable to sexual violence. For the purposes of this research, 211 women, aged 19 to 72, from all social categories, were interviewed. What emerges: one in two disabled women testifies to having suffered sexual violence; more than half of the women reported incestuous crimes; all the women with mental and psychological disabilities questioned relate the refusal of a complaint by the security forces, listening or care by relatives and professionals, due to a certain “hysteria” put forward …

If Céline Extenso recalls that women with disabilities are listened to less, she explains that they testify, a fortiori, much less. “The words of women are generally discredited, but when, in addition, we present psychic and psychological problems, we are labeled crazy and there is no chance that the complaint will succeed, as much at the level of the police services as of the entourage “, she regrets. “We are going to accuse the woman of fooling around, adding to it, of being hysterical … So disabled women are still more silent than able-bodied women.”

In general, it is the whole of society that is not interested in this aspect of the fight against violence against women. Hence the difficulty in making a #MeTooHandicap movement emerge on social networks. Last March, the call for testimonies under a #IncestHandicap was also unsuccessful: both on Twitter and on Facebook, testimonials did not flow.

“The accounts of people with a psychic disability, on Twitter, are quickly cataloged and little listened to”, points out the co-founder of Les Dévalideuses. A credibility problem that comes on top of another just as widespread and devious: the deexualization of people with disabilities. “Disability, whatever it is, desexualizes us so much in the eyes of the population that we do not imagine having a sexuality, and therefore we do not imagine being victims of rape,” explains Céline Extenso. If the mind is closed to this, then it is even more difficult for people with disabilities to make their voices heard.

By internalizing this validism, women with disabilities come to consider themselves as undesirable, continues Céline Extenso. “If we are raped, people might even think that it is already extraordinary that we can be wanted from us.”

>> Disability: validism, from “a good feeling that rots life” to displayed discrimination

Political “hypocrisy” after the rejection of financial independence

In addition to the obstacles related to the disregard of society with regard to disabled people, the omerta around the sexual violence suffered by women with disabilities is sometimes explained by their difficulties (especially in the case of mental disabilities) to perceive what is acceptable and what is not. “People suffer without realizing that it is violence and that they are not consenting”, adds Céline Extenso.

To all this is often added the impossibility for women with disabilities to testify against a spouse on whom they are dependent, physically but also financially. On this subject, if the fact that the conference on Wednesday at the National Assembly was devoted to violence against women with disabilities sends, a priori, a positive message, the women concerned do not expect much, if it is not “hypocrisy”.

Combating violence against women with disabilities would in fact first involve the de-maritalization of the allowance for disabled adults (AAH), insists the co-founder of Les Dévalideuses. A question addressed this year, but the vote of which was blocked in the National Assembly. “The presidential majority obstructed the vote and refuses to grant us this right to financial independence which would allow us to be able to free ourselves from violent and dangerous situations”, denounces Céline Extenso, who says she expects concrete measures, and not conferences .

The AAH is in fact calculated according to the resources of the person concerned and her spouse, “which means that the woman is dependent on her husband financially”, specifies Céline Extenso, adding that if the woman wants to leave, she will be entitled to to the AAH, but will first have to prove that she left home and that she lives alone. “We therefore ask that disabled women can touch their AAH independently of their spouse so that at any time, they can be autonomous to leave.”

Faced with the lack of response at the political level, any struggle can at least be able to count on a network of militant associations to carry its message loud and clear. However, the cause of women with disabilities is struggling to emerge in the demands of militant feminist organizations.

“Everything is linked to a problem of validism”, reacts Céline Extenso. Les Dévalideuses were also born from the observation, during a march against gender-based violence, that the situation of disabled women was not addressed at all. Since then, the work of the handi-feminist association is to bridge the gap with other feminist organizations which, according to Céline Extenso, “often only think of disability as a workload for women caregivers, and not at all. as disabled women, just as women “. A grueling educational effort is then required, requiring the deconstruction of certain validist schemes.

“All militant circles are terribly validists,” laments the co-founder of Les Dévalideuses. However, because of this imperative to go through the educational stage, “we cannot campaign like the others,” she continues. “It is frustrating to see the delay that we can have in terms of realizing that the perception of disability is a real political subject, and not an individual subject.”

One thought on “Gender-based and sexual violence: women with disabilities, more exposed and less heard”