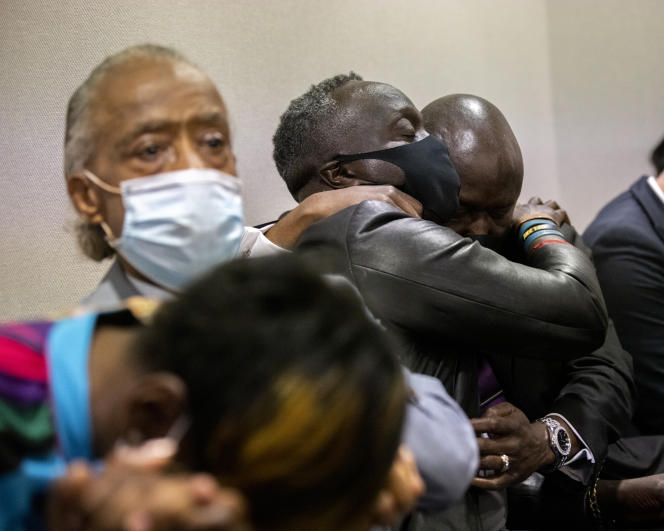 Three white men were found guilty on Wednesday November 24 of African-American jogger Ahmaud Arbery murdered, whom they had prosecuted and then shot dead in February 2020 in the state of Georgia. Travis McMichael, the author of the fatal shots, his father, Gregory McMichael, and their neighbor, William Bryan, were on trial in Brunswick, following the tragedy that had fueled the major anti-racism protests of the summer of 2020 throughout the country.

The twelve jurors, including one black man, deliberated for more than eleven hours to reach this unanimous verdict. US President Joe Biden praised the decision, but said ” a lot of work “ on the road to racial equality remained to be done. “If the guilty verdict reflects that our justice system is doing its job, in itself that is not enough. Instead, we must recommit ourselves to building a future of unity and shared strength, where no one will fear violence because of the color of their skin ”, he also declared in a press release.

The announcement was also greeted by protesters who chanted Ahmaud Arbery’s name outside the courthouse. In the room, a family member shouted for joy when Travis McMichael was convicted. This verdict shows that “Yes, black lives matter”African-American civil rights activist Pastor Al Sharpton said in court. The historic American Civil Liberties Union (ACLU) welcomed the judgment, stressing in a press release that the real challenge was to create a society where whites and African Americans like Ahmaud Arbery could live without fear of racist violence.

Read also Article reserved for our subscribers From George Floyd to Jacob Blake, families of victims on the front lines

On February 23, 2020, the 25-year-old was jogging in this coastal town in the southeastern United States when he was chased by the three men. After an altercation, Travis McMichael opened fire and killed the jogger.

The three attackers then assured to have taken him for a burglar operating in the surroundings and had invoked a law of Georgia then authorizing ordinary citizens to make arrests. A video of the drama – made public nearly three months later – scandalized the United States and Ahmaud Arbery had become an icon of the anti-racist movement Black Lives Matter (“black lives matter”). The racial dimension of this case, in a state still marked by racism and segregation, was long overlooked during the trial, which lasted more than a month.

Read also Article reserved for our subscribers In a few days, “Black Lives Matter” has become a universal slogan

The McMichaels and their neighbor took ” on a whim “ the decision to hunt down Ahmaud Arbery “Because he was black and he was running in the street”, said prosecutor Linda Dunikoski in her indictment. “They scared him” while the young man had no weapon and did nothing else “Than running to escape for five minutes”, she had said. It was a “Attack on Ahmaud Arbery”.

Travis McMichael’s lawyer, on the contrary, assured that his client was not looking to “Take someone’s life”, but that he had acted on behalf of “Sense of duty and responsibility”.

One thought on “Murder of Ahmaud Arbery in the United States: three men convicted – archyde”