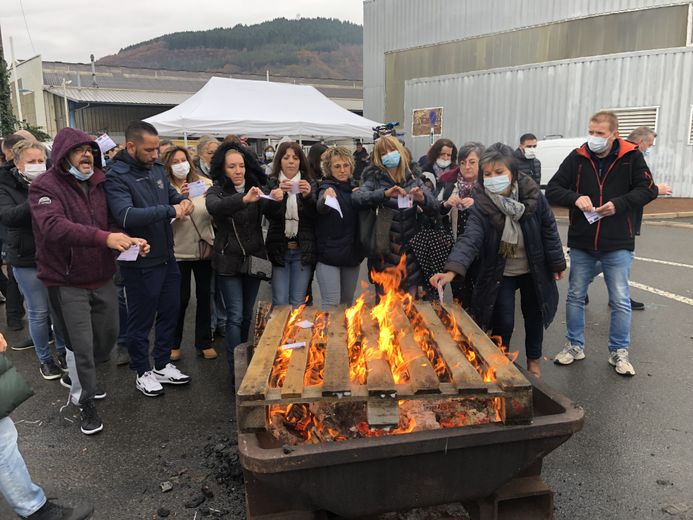 the essential
Anger and disgust for the employees of the Sam factory in Viviez who learned on Tuesday that Renault would not support the offer of the buyer Patrick Bellity. They therefore symbolically burned their voter cards before pursuing other actions and fighting again and again, supported by the entire population of the Basin and the traders of Decazeville.

The Basin woke up groggy on Wednesday morning… Stunned by the news that had fallen the day before that Renault would not support the offer of the possible buyer, Patrick Bellity, of the Alty group, a Sifa technologies company, a sine qua non for the court to trade tilts the balance in the side of the Sam … Tears were falling from the sky, a gray and dreary sky reflecting the morale of the population of the Basin, very affected by this catastrophic scenario. In front of the Sam, at the end of yet another general meeting, the employees, always dignified and combative, went to a brazier to symbolically burn their voting cards: “Thank you Macron, it’s a real gift for Christmas celebrations ! “
In the midst of them, Brigida, for 10 years at Sam, says she is “disgusted” and even if she seems strong, like the others, she is still morally damaged and it is in tears that she thinks of her children including one who is disabled. Because Sam, “these are families, we’re going to lose our job and it’s a tragedy!” », Screams Marie-Jeanne, who came from Avignon 32 years ago to work there and in whom anger takes over:« It could be violent in the next elections! “. While Frédéric, he already seems to be courageously remobilizing himself.

“Money comes before people” comments Régis Bories, owner of the Sport 2000 store in the center of Decazeville, when it is precisely the human that prevailed during all these days of struggle and which still prevailed yesterday. Hands stretched out, throats tightened, shoulders welded together, shivers ran through all hearts and emotion reached each of the 333 employees and all those who were present around them, “These are also 333 families who suffer” , confided, sympathetic Régis Bories who slept badly. Just like Christine, attached to this territory of energy, whose evening was marred by this fallen ax. “And Renault did not even have the courage to warn us, says, with trembling lips with restrained anger, the CGT employee representative, Ghislaine Gistau, the employees learned from the media, in the bus that brought them back from Rodez. It is scandalous to learn that they are made redundant in this way because most of the employees have only worked here, they have devoted themselves completely, in particular to hybrid engines ”.

“It is not normal that Renault has the last word. It’s a shame, all that to go and have parts manufactured abroad, ”says Emilie Farrenq of the Marché d’Antan. “It’s been years that we burst the Basin and that we are not worth working in France, resumes, vehemently, the heating engineer Gabin Fournié, we will do tertiary and social and we will do electricity to make work the Chinese, ”he said, annoyed. “We are really in shock, we see no way out”, confides the seamstress of Rouet d’Or, Gisèle Jonis, who unfortunately no longer sees Sam employees in her clientele. Just like the bakery on the street Gambetta, a little further … At the gas pump, near the factory, the cashier looks crestfallen: “It’s a blow”. “We are all concerned and all disconcerted by the future of the Basin because it risks impacting the hospital and schools,” says Frédéric Bousquet of the Maison de la Presse. “I think the liquidation will be acted, we will be impacted. The State is a shareholder in Renault, it has given them millions and it cannot do anything… ”, wonders the manager of the Sport 2000 store. “But the more Renault will earn money, the more the State will collect dividends… It is really the powerful who govern. In any case, the industry in France is dying. 40 years ago it was textiles, today it is the automobile, and tomorrow it will be aeronautics?….

I would like to salute the people of Sam and their leaders who have been fighting for months. I pity them today. They will have to keep fighting to find a job. Renault going to reclassify them in Romania or in Poland? »Concluded Régis Bories. “Unless there is a miracle….”
Here everyone wishes and hopes and calls for it. The struggle continues. Surprise action Thursday, at the end of the morning, in front of the Sat, then rally at 5:15 p.m., in the presence of the national secretary of the CGT, Philippe Martinez.

“It will be paid for at the ballot box! There will be neither justice nor forgiveness. For 300 days we have been mobilizing just to have the right to work. We are absurd! We’re in real life here. We will not let go. We will keep our heads high because we can look at each other in the mirror, ”yells David Gistau, departmental secretary of the CGT, tremolos in his voice. “The Minister of the Economy, Bruno Le Maire, buries the Sifa technologies project because he does not find it strong enough when he wrote the opposite in a letter addressed to the court. The state is unable to apply its reindustrialisation and relocation policy “, launches CGT staff delegate, Ghislaine Gistau.” All elected officials are united, especially the mayor of Decazeville, François Marty, who is very affected. The only one not to provide us with support, it is is the deputy, Anne Blanc. While the President of the Region, Carole Delga, will meet with us on Monday, ”she adds.