Lyon: action of the “Daltons” at La Guillotière during the Morandini program (video) – LyonCapitale.fr 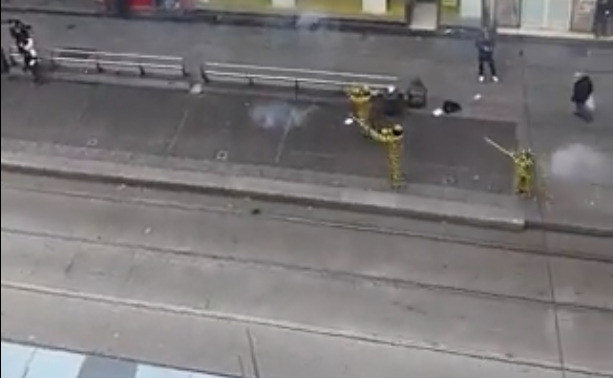 While the CNEWS television channel is filming a show at La Guillotière this Wednesday, November 24, between Morandini and Jordan Bardella of the National Rally, members of the Daltons collective have appeared on the Place du Pont to fire fireworks mortars. A man has been taken into custody.

Jean-Marc Morandini and his program “Facing the street ” return this Wednesday, November 24 and receive the interim president of the National Gathering Jordan Bardella. To shoot their show live, the CNEWS teams have chosen the place du pont à la Guillotière. Upstream, on social networks, several collectives and associations protested against this “parade” who go “spread racist and hate speech“.

The Antifa group in Lyon has also called for demonstrations in the neighborhood and many people gathered on site to protest against the arrival of Jordan Bardella and Jean-Marc Morandini. While a very important police device is deployed on the spot, at least three men dressed in a Dalton costume, with yellow and black stripes, burst into the square of the bridge before firing fireworks mortars at the police , according to a video obtained by Lyon Capital.

A Dalton placed in custody

According to information from our colleagues from Progress, which we were able to confirm, a member of the Daltons was taken into custody by the police. According to our information, contacts would have taken place between the Daltons group and Morandini’s teams, before the show, the question of questioning them during the live would have arisen.

The action had been announced upstream on Instagram by the rapper collective from the 8th arrondissement of Lyon. An action that comes as three members of the group will appear in court this Friday for one of their urban rodeos.

Read also: In Lyon, how the media echo made the costume of the “Daltons” too big for them

One thought on “Lyon: action of the “Daltons” at La Guillotière during the Morandini program (video) – LyonCapitale.fr”