With beers, coffee, honey and textiles, former FARC combatants and victims bet on peace in Colombia 5 years after the agreement was signed 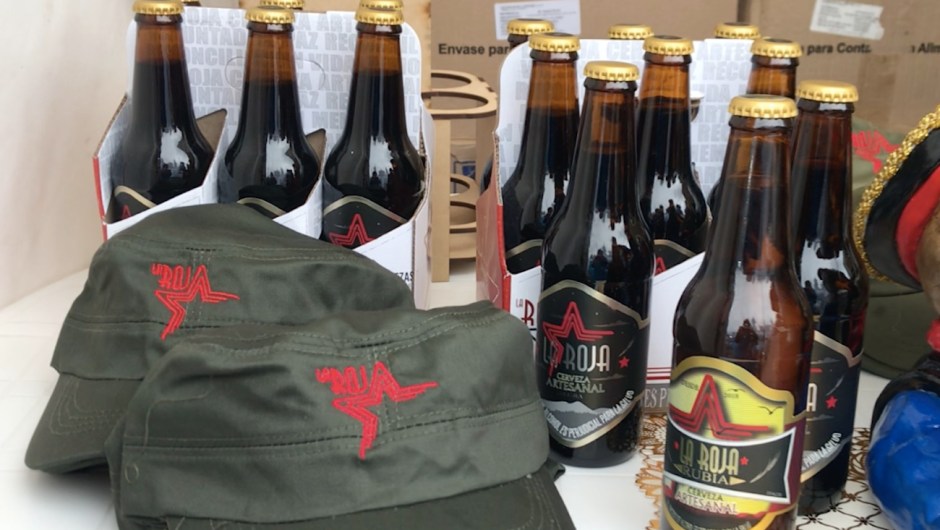 (CNN Spanish) – Jonathan Orjuela spent two decades in the ranks of the FARC guerrillas. He went there out of his own conviction, he says, when he was 16 years old. He spent 20 years touring the country with a rifle in hand, being a guerrilla and sometimes a militiaman, convinced that the transformation of the country was being done “from the grassroots.”

“I found in the guerrilla struggle why there were people who had armed themselves and gone to the mountains to fight for ideals,” Orjuela told CNN en Español.

“I was totally in love and convinced of that process,” he said.

It was 1996 and once he finished high school, he remembers, he decided to enlist in the ranks of the FARC as a protest for class differences, for the difference in access to opportunities, and because doing politics legally was “dangerous,” he explains. .

“The history of our country shows us that when we try to do politics legally, we are exposed to being shot in the back in the most miserable way in a public square,” he says.

So he lasted 20 years as a guerrilla – “both in the jungle and in the cities, because we operated in different ways” – seeking to change, with weapons, what he could not with politics.

But around 2016, a door was opened for Orjuela: a FARC negotiation with the government to build a society without weapons.

“We did it with all the conviction of the case,” he recalls.

He says that like him, many guerrillas saw that it was time to lay down their arms and bet on the construction of a country, “it is no longer about arms, but about a new way of doing politics.”

The signing of the peace agreement

On November 24, 2016, the president of Colombia, Juan Manuel Santos, and the maximum leader of the FARC guerrilla, Rodrigo Londoño Echeverri, alias ‘Timochenko’, signed a peace agreement to end a conflict of more than 52 years that left 250,000 dead and about 8 million victims.

The president of Colombia, Juan Manuel Santos, and the maximum leader of the FARC, alias “Timochenko” after the signing of the second and final peace agreement for Colombia. (Credit: LUIS ROBAYO / AFP / Getty Images).

The agreement was reached after four years of negotiations in Havana, Cuba, and after 53 days in which the original agreement between the government and the FARC was rejected by means of a plebiscite. This second agreement, known as the Colón Theater agreements, came after renegotiations that included the proposals of the no supporters in that plebiscite.

One of the covenants of these agreements is the reincorporation of ex-combatants —together with victims and the communities— who wanted to reintegrate into social and economic life through certain productive projects developed in the communities.

This reintegration program is offered through the government to “demobilized members of the Armed Groups Organized on the Margins of the Law (GAO) who have not committed crimes against humanity”, According to the government. And it is oriented to “the generation of productive alternatives” so that these people obtain sustainable sources of income in the medium and long term.

According to figures from the Agency for Reincorporation, a government entity, almost 13,000 people are in the process of reincorporation until October 31, 2021. There are currently 3,575 approved projects, benefiting some 7,600 ex-combatants, according to official figures.

Jonathan Orjuela is one of those reinstated who now seek to rebuild the country from another shore. He is part of the National Coffee Table, where 30 associations of more than 1,000 ex-combatants who produce specialty coffees meet.

For this, both he and his colleagues have received training and education related to the coffee business, one of Colombia’s star products. They take care of the entire process that requires a special coffee to reach the homes of Colombians.

Was the peace agreement in Colombia a FARC strategy? 0:41

“We want to show that from the territories, with the joint work between ex-combatants and peasant communities, we are more and we can achieve together dignify the work of the field, of the peasant, and bet on the reincorporation of ex-combatants,” he told CNN.

There is also beer.

It is called La Roja and it is one of the productive projects of ex-combatants that are perhaps best known in Colombia. This craft beer factory, owned by ex-combatants from the Territorial Training and Reincorporation Area (ETCR) of Icononzo, Tolima, produces lager, red and black porter beer with 5.5% alcohol volume.

La Roja beer was born as a productive project of ex-combatants who accepted the 2016 peace accords.

“This undertaking is the future of the families of the reincorporated, and of the communities that are located around the territorial spaces and cities,” Rubén Darío Jaramillo, who was a peace signatory and is now a brewmaster of The Red.

“We are showing the country and the world that we are delivering … because this country really needs a change,” Jaramillo told CNN. “We want a different country, with well-being, opportunities, education, health, housing, drinking water. A country where the economy is directly native, one can work in the countryside and the city without violence.”

Rebuilding the social fabric: the case of a victim

Odalys Morales was a victim of violence. He is an indigenous social leader and weaves making cane arrow hats with his feet. (Credit: Melissa Velásquez Loaiza / CNN)

Victims are also part of these projects.

One of them is Odalys Morales, an indigenous woman of the Zenú culture, who was a victim of the paramilitaries in the department of Córdoba, in northern Colombia, almost 30 years ago.

“They killed my dad, my older brother,” he says. “Paramilitary groups totally left us on the street because they took everything away [a mi papá] what he had on his farm. Everything Everything everything. And we stayed in the street, “he adds without wanting to give more details, since he says it is painful to remember that after 27 years.

She says that she came to Bogotá because she received threats for being a social leader. (According to Human Rights Watch, between 2016 and December 2020, 421 human rights defenders from remote areas of the country were murdered in Colombia, following the signing of the peace accords)

Now, he weaves to rebuild a social fabric broken by years of violence.

He weaves with his feet, since he has no hands to do it (Morales has lacked his upper limbs since he was born). So with the expertise of an art that he has known for years, he weaves hats, bags, handles, wallets, individual items and much more, with arrow cane fiber, a traditional raw material of the artisans of Córdoba and Sucre.

Although the peace agreement was not signed with the paramilitaries, the productive projects include all the victims of the war in Colombia.

The challenges of implementing the agreements

The President of Colombia, Iván Duque, said this tuesday that since the beginning of his government he has made “a total bet” to the implementation of the agreements. But his opponents have said for years that he and his party want to “tear apart” the peace. Duque has always responded that he wants “peace with legality.”

Orjuela says that the government has put “obstacles” in the implementation of the agreements.

“We encountered great setbacks and great difficulties due to the constant and systematic breaches of something by the national government,” he told CNN.

The progress of the implementation of the peace accords has stalled in the last two years, because “the actors in charge of implementing the Final Agreement have worked on actions to achieve goals that take longer to complete,” says a Kroc Institute report from the University of Notre Dame in August 2021. The Kroc Institute is mandated by the Government of Colombia and the FARC to “provide technical support in the follow-up and verification” of the implementation of the peace accords.

Despite the criticism that the peace process has received, the UN and the international community have applauded the peace effort in Colombia.

“The Agreement has a vocation to transform the root causes of the conflict, so its implementation and success in the territories is crucial”, said the UN Secretary General, Antonio Gutérres, on his visit to Colombia for the five years since the signing of the peace accords.

As if it were a metaphor for what he was and what he is now, Rubén Aguirre produces and sells honey, after being displaced by paramilitaries and guerrillas about five years ago from Charco, Nariño.

“There were vandalism groups, groups of paramilitaries (paramilitaries) and there were guerrillas, strongholds of the guerrillas, and then they did not even know which group was the worst,” says Aguirre, recalling how he was exiled from his homeland in Nariño, in the southwest of Colombia.

The violence that forced him to leave for Bogotá – where he initially sold CDs, films and USB sticks – occurred because residual groups wanted to occupy FARC territories after their demobilization, according to a 2021 HRW report. that of alias ‘Guacho’, who was accused of the kidnapping and murder of the journalistic team of the newspaper El Comercio in 2018. ‘Guacho’ was killed in December 2018.

“It was a violence of whoever instilled the most terror to see who was in command, replacing alias ‘Guacho’,” Aguirre recalls.

That violence forced him to flee his region because those “vandalism groups,” as Aguirre calls them, “killed indiscriminately.”

But once he found out about the beekeeping project that he could access as a victim of the conflict, he joined to start rebuilding his life.

“Thanks to this process I am defending myself with my daily support.”

One thought on “With beers, coffee, honey and textiles, former FARC combatants and victims bet on peace in Colombia 5 years after the agreement was signed”