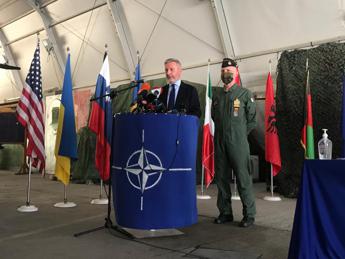 (From the correspondent Silvia Mancinelli) – The military base in Herat has the colors of the fiery earth and the dust that rises without wind, escaping from an asphalt that returns to the faded horizon the boils of temperatures that touch 44 degrees. And it is here, on an afternoon that was not morning due to a military flight blocked in Dammam with journalists on board, that the Tricolor is lowered in the presence of Defense Minister Lorenzo Guerini, the Chief of Defense Staff, the General Enzo Vecciarelli, the commander of the Coi (Joint Operational Command of the top), the Army Corps general Luciano Portolano, and the commander of the Folgore Brigade, General Beniamino Vergori, who lives in the Herat base with the ready soldiers folded, to give their “fort” to the Afghans. Italy leaves the narrow red land between Iran and Pakistan after 20 years of building a peace that these people had almost forgotten. In the Nato base a few kilometers from where Boeing and C130 bring glimpses of home and hugs, the dust covers the roofs of offices, lodgings, shelters with sandbags, even the gym that today, except for the few remaining tools and stacked in a corner, it houses a huge model with a scale reproduction of the base itself. There are the turrets, the faces that rise to the sky at every noise, the barbed wire on two-meter high walls to tell the still great work that needs to be done. There is a colorful thought in memory of those who have never returned from Afghanistan, “53 tears that will never be forgotten” General Vecciarelli defined them in his speech. And then there are the faces of our soldiers, of the high-ranking ones and of the novice ones, who smile and remember the great work done, the projects created, the trust transmitted to a country that today, 20 years after 11 September, may choose not to lend its side to the terrorists. To regain rights, education, democracy, such as that returned with the elections. The Italian soldiers return home after months to breathe dust, burn their skin and create a new idea of ​​freedom. The return has been in the air since May, June seals it with a flag that until today has waved proudly even without wind.