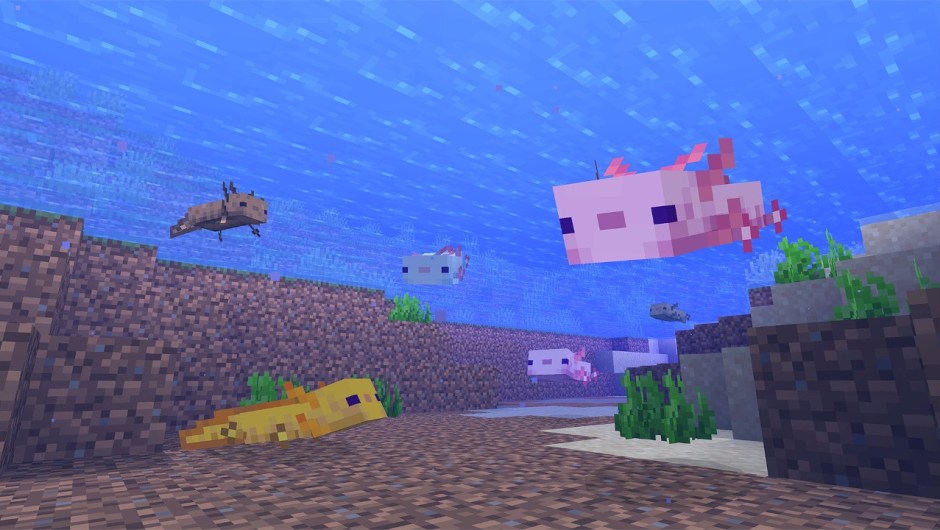 (CNN Spanish) – Evil goats, shiny squids and adorable axolotls are the stars of the update for Minecraft “Caves and Cliffs: Part 1” which is now available on all platforms, including Xbox Series S, Xbox One, PlayStation 5, PlayStation 4, Nintendo Switch , iOS, Android and Windows 10; as well as a Java edition for Windows, macOS, and Linux.

On October 2020 Minecraft announced the release of the “Caves and Cliffs” update, which will be made in two parts. The first available from today, June 8, and the second during the end of the year festivities.

According to Minecraft, this update is focused on “some cute and fun monsters,” like the colorful axolotls. Here we tell you everything we know about the axolotl both inside and outside the Minecraft universe.

Have your axolotl-scooping buckets at the ready: Caves & Cliffs: Part I releases tomorrow! pic.twitter.com/cuCEEMyrsR

The axolotl is native and endemic to the lakes of the Valley of Mexico, and its name in Nahuatl is axolotl, which means “water monster”. On a cultural level, the pre-Hispanic indigenous people considered him the twin brother of Quetzalcóatl.

In real life, this amphibian that remains at the bottom of the lakes and canals of Xochimilco, but in Minecraft they will live inside the lush caves (Lush Caves, in English) which will not arrive until the second update “Caves and Cliffs” . However, for now you can find them in underground lakes.

Cute on the outside, fierce on the inside

Just like in real life, axolotls in Minecraft come in different colors, such as pink, brown, gold, blue, and cyan; and they also have the ability to regenerate, similar to royal axolotls. “When he reaches a very low amount of health, he will actually stay put and play dead,” explained Brandon Pearce, video game developer for Mojang Studios at a video on YouTube. After remaining “dead” for a few moments, the axolotl will be able to regain its health and return to battle.

To create an army of axolotls, you only need tropical fish to raise them, a couple of buckets to catch them, and do not remove them from the water as they will dry out and begin to suffer damage if they are out of the water for more than 5 minutes.

Axolotls cannot walk on the surface, but they are quite effective at fighting fish, squid, drowning, and guardians. In addition, these adorable amphibians accompany the player in exchange for fish, and in the event that a player kills a mob, the amphibian will show its appreciation by giving the player regeneration and eliminating fatigue.

The “Caves and Cliffs: Part 1” update is accompanied by several new additions, in addition to axolotls, such as blocks of new stones and minerals, and goats that – although adorable – will not think twice about giving you a head butt. To access this update, you just have to make sure you download the latest update, 1.17.

In a video on YouTube Agnes Larsson, Video Game Director for Vanilla Minecraft, said that it is very important to the Minecraft team that users can play their worlds for many years to come, so by updating to Part 2 of “Caves and Cliffs” they will mix the old and the new. the new World.

More announcements about “Caves and Cliffs: Part 2” and Minecraft’s plans for the future will be announced during the Minecraft Live 2021 event, which has no date for its completion yet.

Underscored: The World of Minecraft brings discounts of 14% to 30% on toys, books and the video game

1 thought on “These are the axolotls that come along with “Caves and Cliffs: Part 1” of Minecraft”