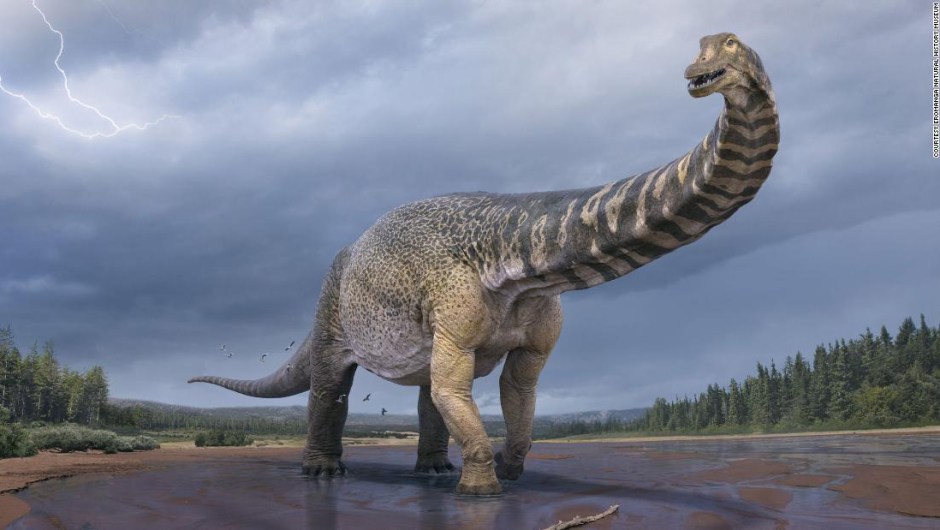 (CNN) – A new species of dinosaur discovered in Australia was confirmed as the largest ever found in the country, and one of the largest in the world.
The fossilized skeleton, nicknamed Cooper, was found in southwest Queensland in 2007 at Cooper Creek in the Eromanga Basin.

But the skeleton was a mystery for years, and it wasn’t until now that paleontologists scientifically described it and gave it a name.

Researchers from the Eromanga Natural History Museum (ENHM) and the Queensland Museum published their findings in the scientific journal PeerJ on Monday.

Cooper, whose scientific name is Australotitan cooperensis, is estimated to have walked the Earth more than 90 million years ago. It was a titanosaur, a species that fed on plants and belonged to the long-necked sauropod family, the largest species of dinosaur.

It is estimated that the dinosaur reached a height of between 5 and 6.5 meters at the height of the hip, and a length of between 25 and 30 meters, which made it as long as a basketball court and as tall as a building two-story, according to the ENHM.

With its long neck and tail it could resemble the best known brachiosaurus.

Bones of Australotitan cooperensis, the largest dinosaur ever found in Australia.

Robyn Mackenzie, co-founder of the Eromanga Museum of Natural History, said the team of paleontologists was able to quickly establish, by the size of the bone fragments, that they belonged to a large species.

“The pieces were quite large and bulky,” he said. “We were able to measure the bones and compare them with those of other species in Australia and the rest of the world.”

Several of the large parts, including the dinosaur’s shoulder blades, pelvic bones, and limbs, were mostly intact. However, the researchers faced delays in identifying the species due to difficulties in handling its large and fragile bones.

Robyn Mackenzie, co-founder of the Eromanga Museum of Natural History, next to the fossilized dinosaur skeleton.

The enormous size of the bones meant that they were stored in museums sometimes hundreds of kilometers apart from each other.

So the team used 3D technology to scan each bone from the titanosaur, allowing them to digitally compare the bones with those of similar species.

Australotitan was found to be closely related to three other Australian sauropods that had been discovered further north, in the town of Winton.

The study also opens the way for new dinosaur discoveries that could be held in Australia.

“The findings have put Australia on the map,” and allowed Australia to join other countries that are advancing paleontology, Mackenzie said. These kinds of “giant dinosaurs” have been found mostly in South America so far, which makes this discovery even rarer.

“This is just the tip of the iceberg of discoveries in Australia,” he said. “It has opened a whole new frontier for dinosaurs.”