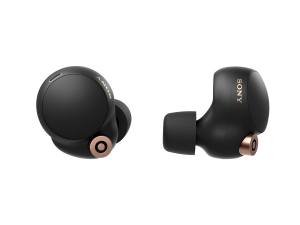 (CNN Spanish) – The new Sony WF-1000XM4 headphones arrive as one of the main competitors of the popular AirPods Pro and one of the most talked about in recent months.

As you can imagine, the Sony WF-1000XM4 are the new generation of wireless headphones of the WF-1000XM3 that the Japanese company presented in 2019 and that surprised by being one of the first in the world to offer active noise cancellation in headphones totally wireless from a well-known company – even before Apple introduced the AirPods Pro that same year.

Back then, Sony’s earphones managed to demonstrate better noise cancellation and sometimes better sound quality as well, but they had no official water or sweat resistance and their box or case did not offer wireless charging and was larger than the original. of Apple hearing aids and also the Samsung Galaxy Buds Plus.

The new Sony WF-1000MX4 headphones learned from their previous generation and now come with IPX4 water and sweat resistance, a case that can be charged wirelessly and promises improvements in both active noise cancellation and sound quality.

READ: The best headphones to work from home

The Sony WF-1000XM4 hearing aids integrate the company’s V1 processor that with the help of two microphones in each hearing aid (one pointing backwards and the other pointing forward) allow better analysis of the environment to offer a noise cancellation superior to that offered by the headphones. WF-1000XM3 with the QN1e processor.

Also, the Sony WF-1000XM4 have an automatic wind noise reduction mode and despite improvements Sony says that these functions consume less power.

These Bluetooth or wireless headphones feature a new 6mm sound unit that would allow for some improvements in sound quality, while offering support for wireless hi-fi sound thanks to LDAC and having the ability to scale compressed digital files to deliver better quality. .

Sony also says that it now has a bone conduction sensor and microphones that will allow our voice to be detected more clearly so that we can talk on the phone with more peace of mind.

The Sony WF-1000XM4 bring the same function called Speak-to-Chat that the company introduced in the WH-1000XM4 and that allows the hearing aids to detect by themselves when you speak to pause the music and activate the ambient sound (deactivates the cancellation of noise).

This is certainly a great idea because it eliminates the need to have to remove a hearing aid or activate the ambient mode manually in order to talk to someone.

However, testing the WH-1000XM4 I realized that singing or even simply making noise when listening is detected as that you want to speak, so with this active function the music is paused and that noise cancellation is deactivated, so it will be interesting to see if there is some improvement with the WF-1000XM4.

These hearing aids also have a feature in their app (available for iOS and Android) that allows you to determine the indicated earbud size to use.

On the other hand, the WF-1000XM4 headphones also offer the 360 ​​Reality Audio sound experience (compatible only with some apps and it is necessary to pay), it has adaptive sound control that adjusts the ambient sound according to your activity or place where you are and they detect whether or not you are wearing them to pause and / or play music.

In addition, these Bluetooth headphones are compatible with Google Assistant and Amazon Alexa, so just by saying the word or activation phrase you can request information or perform a specific command.

As I mentioned before, the headphones now also offer some resistance to water and sweat, the same IPX4 that Apple’s AirPods Pro have. This does not mean that they can be submerged, but that for example they simply have the ability to resist the sweat that you can produce when you exercise.

Sony ensures that the battery of the new WF-1000XM4 lasts up to 8 hours of use, while its case offers an additional 16 hours. In this way, the Sony WF-1000XM4 headphones would offer up to 24 hours on a single charge.

The Sony WF-1000XM4 headphones have a suggested price of US $ 249 and are available from June 8 at the Sony store, Amazon, Best Buy and other authorized sellers.

1 thought on “Sony WF-1000XM4: Sony headphones think they have what it takes to beat Apple’s AirPods”