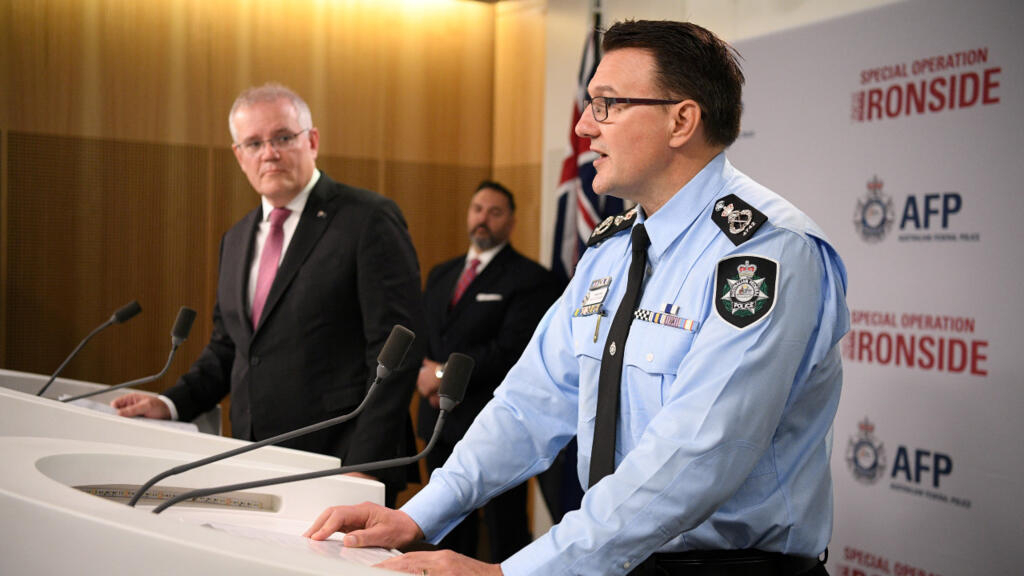 A police operation targeting organized crime led by Australia and the United States has resulted in the arrest of hundreds of people in 18 countries, after the infiltration of an app used by criminals to communicate encrypted.

Hundreds of people have been arrested around the world in a massive crackdown against organized crime, thanks to the infiltration by the police of an application used to exchange coded messages between criminals, authorities announced on Tuesday (June 8th). from several countries.

Presenting the operation as “the most sophisticated in the world” against organized crime, police in several countries in Europe, the United States, Australia and New Zealand have revealed that they are in fact controlling the application. baptized “AN0M”, used by criminals around the world to communicate in an encrypted way.

The operation called “Shield of Troy” allowed investigators from 16 countries to observe members of the Mafia, Asian criminal syndicates or even outlaw motorcycle gangs who exchanged on drug sales, activities money laundering or even murder plans.

In Australia alone, 224 people have been charged in this crackdown which, according to Australian Prime Minister Scott Morrison, “inflicted a heavy blow on organized crime, not only in this country, but which will resonate around the world. integer “.

“The police in the pocket”

In addition to gaining the ability to decrypt messages in real time, the FBI and other law enforcement agencies have been successful in encouraging criminals to use the AN0M encrypted phone.

The devices could not make calls or check email and did not have GPS data. They just allowed messages to be sent to other AN0M phones. They could only be bought on the black market and involved having a code transmitted by another user.

Australian media report that police were involved in distributing the phones to known suspects, including an Australian wanted for drug trafficking and on the run in Turkey.

“A criminal had to know another criminal to get this material,” Australian police said in a statement. “The devices circulated and their popularity grew among criminals, who had confidence in the legitimacy of the application because major figures in organized crime vouched for its integrity,” she continued.

“These criminal influencers have put the Australian Federal Police in the pocket of hundreds of suspected offenders,” said Australian Police Chief Reece Kershaw in the statement.

“In the end, they handcuffed each other by embracing and trusting AN0M and communicating openly with it, not knowing that we were listening to them all the time,” he added.

This operation was the result of the FBI’s infiltration of similar encrypted communications systems, “Phantom Secure” and “Sky Global”, which had allowed American police officers to access the communications of tens of thousands of users, including including leading figures in organized crime.

“The closure of these two encrypted communications platforms has created a vacuum in the market,” New Zealand police said. To fill this void, “the FBI operated its own system of encrypted devices, dubbed AN0M.”

At the same time, rumors have been started about the alleged vulnerability of a competing system dubbed “Ciphr”.

It is not immediately clear whether AN0M is entirely a creation of the police, or an already existing system that has been infiltrated.

Result of this operation which lasted three years in Australia: 224 people in Australia are now charged with a total of more than 500 charges, six drug manufacturing laboratories have been closed, quantities of weapons and 45 million Australian dollars (29 million euros) in cash were seized.

“Hundreds of people have been arrested” outside Australia, Australian police added.

The New Zealand police, for their part, announced the arrest of 35 people, in particular for drug trafficking and money laundering.

Europol and the FBI were scheduled to give a press conference in The Hague at 8 a.m. GMT.

The curfew lowered to 6 p.m. in Pointe-à-Pitre and Les Abymes from this Friday – Guadeloupe the 1st – Overseas the 1st