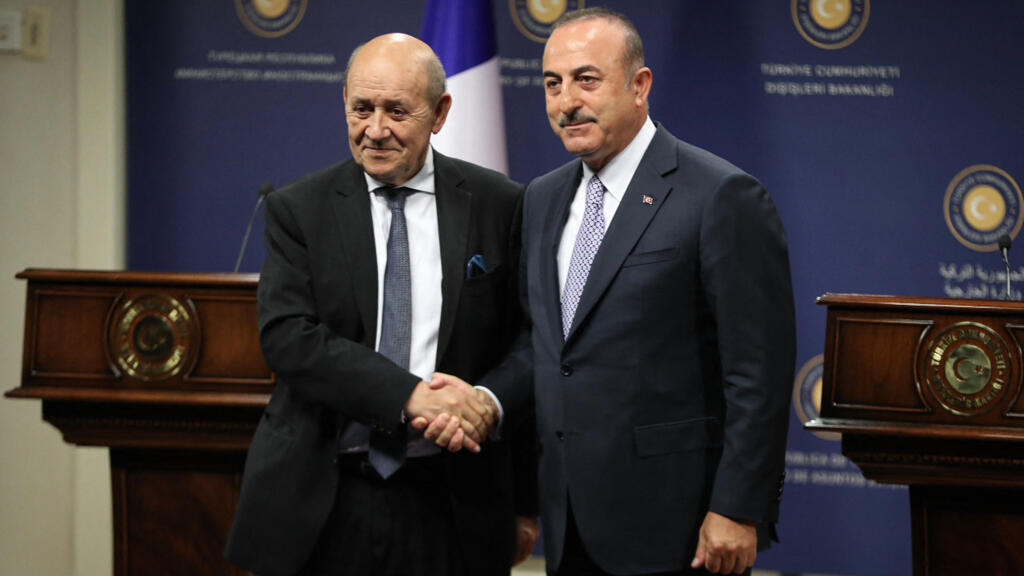 The Turkish Foreign Minister paid a first high-level visit to Paris on Monday, where he met his French counterpart. This meeting comes after a year of tensions around several issues such as Libya, Syria, the Eastern Mediterranean or the Paris offensive against Turkish influence on Islam in France.

The heads of French and Turkish diplomacy met on Monday, June 7 in Paris, to engage in a more peaceful dialogue after more than a year of tensions at the top between President Emmanuel Macron and his counterpart Recep Tayyip Erdogan, from the eastern Mediterranean to Libya.

“We plan to strengthen our relations with France on the basis of mutual respect,” tweeted Mevlut Cavusoglu, whose country is seeking to normalize its relations with Paris, a few days before a NATO summit on June 14 in Brussels. .

His counterpart, Jean-Yves Le Drian, remained more factual in his communication. According to his ministry, the two ministers gave an overview of the contentious issues and took stock of the bilateral relationship.

France and Turkey have displayed antagonistic positions on a number of subjects within the Atlantic Alliance, which crystallized in particular in the eastern Mediterranean where Paris supported Athens in the face of Ankara’s gas ambitions and where an incident opposed buildings Turkish and French in June 2020.

Ignoring the warnings from Europe, Turkey organized several gas exploration missions in Greek waters last year, causing a diplomatic crisis of unprecedented magnitude since 1996, when the two countries very close to war. But after the announcement of European sanctions against Ankara, Recep Tayyip Erdogan had multiplied the gestures of appeasement and called on Greece to discuss.

Relations between France and Turkey have also deteriorated sharply due to disagreements over Syria, Libya and more recently over the conflict between Azerbaijan and Armenia in Nagorno-Karabakh. During the war, the Armenians accused the Turks of being directly involved in the fighting, which Ankara denied. Several countries including France had also denounced the sending to the front alongside the Azerbaijani forces of pro-Turkish fighters from Syria.

“My dear friend Aliev (Azerbaijani President Ilham Aliev) gave advice to the French telling them that if they love the Armenians so much, they only have to give them Marseille. Me too, I give them the same advice” , said Recep Tayyip Erdogan.

“Macron is a problem for France”

In October, the Turkish president had questioned the “mental health” of his French counterpart, accusing him of carrying out a “campaign of hatred” against Islam, because he had defended the right to caricature the prophet Muhammad and for his speech against Islamist “separatism” in France. He also called for a boycott of French products, adding a stone to the criticisms raining down on Emmanuel Macron in the Muslim world against the backdrop of the dramatic context with the assassination of Samuel Paty.

In response, Emmanuel Macron had decided to recall the French ambassador to Turkey, while the head of French diplomacy Jean-Yves Le Drian had for his part denounced on the part of Turkey “a desire to stir up hatred” against France and its president.

Turkey’s anger was rekindled at the end of October after “Charlie Hebdo” published a cartoon showing President Erdogan in a T-shirt and underwear, drinking a beer and lifting his skirt. ‘a woman wearing the veil, revealing her bare buttocks. Ankara reacted by announcing the adoption of “judicial and diplomatic” measures against France.

In early December, Recep Tayyip Erdogan again targeted the tenant of the Élysée Palace. “Macron is a problem for France. With Macron, France is going through a very dangerous period. I hope that France will get rid of the Macron problem as soon as possible”, he also declared, on December 4, during ‘an exchange with journalists in Istanbul.

Since then, as a sign of appeasement, the two heads of state with execrable relations met last March by videoconference.

Ankara tries to emerge from its growing isolation

Turkey is now insisting on points of “convergence” and “common interests” with France, which for its part continues to demand tangible signs of easing tensions from Ankara.

Paris notably calls for the withdrawal of Syrian mercenaries deployed by Turkey in Libya alongside the previous government in Tripoli.

“In Libya, everything must be done to ensure that the political, security and electoral transition calendar is respected and to translate the ceasefire into reality,” said the spokesperson for the French Foreign Ministry.

Bilaterally, the two ministers recalled their “wish to hold the next session of the joint France-Turkey economic and trade committee (JETCO) this autumn”, she added.

Ankara has been stepping up its actions towards its Western and regional allies since the start of the year to get out of its growing isolation on the regional and international stages.