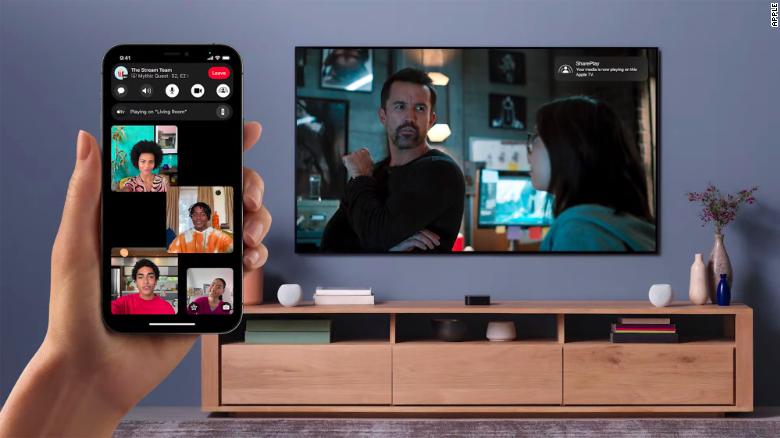 What will Apple announce at WWDC that begins this Monday? 1:15

(CNN Business) – Apple kicked off its annual developer conference on Monday by unveiling new features for iOS 15 that respond to our lives as the world begins to emerge from the pandemic, including video calling updates on Facetime and digital keys in Apple wallet.In FaceTime, Apple will offer new options for users to watch movies or listen to music together during a call.

A new grid view will also be introduced to better convey each face in a call. Now Android and Windows users will be able to join FaceTime calls.

“We all use video calling for almost everything by now,” said Craig Federighi, Apple’s senior vice president of software engineering, during the virtual conference presentation Monday.

Apple introduced the FaceTime updates as part of iOS 15.

Apple is also introducing updates to its mobile wallet that will allow users to unlock everything from their home to their hotel room with in-app digital keys.

“You can never leave the house without your keys, so we keep adding keys to the wallet and making them even better,” said Jennifer Bailey, vice president of internet services and Apple Pay, citing recent additions such as car keys to unlock a vehicle from your iPhone. BMW and other companies will market cars with this feature from the end of this year, he said.

The company will also make it possible to store identity documents in Apple Wallet. Starting this fall, users will be able to scan their driver’s license or ID card in the Wallet app, in participating states, where it will be stored in encrypted form. Bailey said Apple is working with the Transportation Security Administration (TSA) to use that digital ID for airport security checks.

These features were announced during the keynote address at Apple’s Worldwide Developers Conference, an annual multi-day event where many software innovations are often featured. iOS 15 will be available to the general public in the fall.

Keeping Apple at the center for users and developers

Like many tech companies, Apple and its products became even more important in our lives during the pandemic, as countless households were forced to live and work more behind screens. Monday’s Apple announcements suggest that the company hopes to remain a key part of our lives, even as many return to work and socialize away from home.

Apple CEO Tim Cook spoke during a keynote address to kick off WWDC 2021. The event comes at a time when Apple is facing renewed scrutiny on how it treats application developers.

For people who are still frequently glued to their screens, Apple introduced a new iOS feature called “Focus” that will allow users to select what kind of notifications they want to receive, and from whom, at certain times of the day. For example, a user can put their phone in “work” mode and choose to only receive notifications from co-workers, emails, and Slack messages. When all other notifications are turned off, users can set an automatic “do not disturb” response for messages.

“With Focus, you can set aside time in your day for work and personal life,” said Federighi.

In iMessage, Apple wants to make it easier for users to keep track of the photos, links and other content that have been sent to them. Applications such as Photos, Safari and Apple Music will now include a “shared folder with you” to highlight the content that has been sent through messages.

Beyond the new gadgets and the unveiling of iOS 15, WWDC is also an opportunity for Apple to address its developer community amid two major recent clashes with app developers: one controversial legal battle with Epic Games, maker of Fortnite, about Apple’s App Store fees and a dispute with Facebook over Apple’s new privacy policy on the app monitoring.

The company reminded developers that the App Store now has 600 million weekly visitors from 175 countries and regions, and said it has paid out more than $ 230 billion to developers since the App Store launched in 2008.

As expected, Apple redoubled its commitment to privacy during the presentation.

“At Apple, we believe that privacy is a fundamental human right,” said Federighi, referring to recently implemented features such as App “nutrition labels”. “We don’t think you have to choose between great features and privacy. We think you deserve both. “

The company introduced a variety of new security features, including a so-called “email privacy protection.” The email application on Apple devices will now hide users ‘IP addresses and their location, so that companies sending emails cannot link that information to other users’ online activity. Also, senders cannot see when or when users open the email.

Siri in iOS 15 will now process audio directly on the device, instead of sending the commands to a server, to alleviate concerns about hearing unwanted audio from third parties.

Siri will also receive a privacy update. The virtual assistant app will now process the audio directly on your device, instead of sending the commands to a server, to mitigate the concerns about listening to unwanted audio by third parties. In 2019, Apple apologized for letting contractors listen to the commands users give Siri. The change will also make Siri’s response time faster, Apple executives said.

ICloud + subscribers can take advantage of additional new privacy features. These include Safari’s “private relay” feature, which encrypts traffic leaving a user’s device so that no third party (including Apple) can intercept and read what you are looking for. And the “hide my email” feature will allow subscribers to enter a randomly generated email address when signing up for an account on a new website that will forward messages to their inbox.

This will reduce the number of companies that have access to users’ direct email addresses.

These privacy changes will likely “cause more consternation among companies that rely on user data for tracking, advertising and monetization,” CCS Insight chief analyst Ben Wood said in an email.

Multitasking on the iPad and locating lost Airpods

Although Apple didn’t make any new hardware announcements on Monday, it did introduce software updates to refresh products like the iPad and AirPods.

Updates to iPad OS 15 will make it easier for users to work on the go. Those who have the device will soon be able to place widgets between their home screen applications, such as widgets for contacts or Apple TV, including new, larger formats made for the iPad screen.

The iPad 0S 15 will offer a new “multitasking” function.

A new “multitasking” feature on the iPad will allow users to work on two applications at the same time using a split view, and a simple swipe mechanism to switch between applications. in split view.

The company has also announced the translation service for the iPad operating system, as well as for iOS and Mac OS. Users can right-click the text of any application, including selected text from a photo, and translate it.

A “machine translation” function can listen when you speak with your iPad and translate that speech.

Apple has also introduced a new feature on AirPods called “conversation boost,” designed to help the hearing impaired. The tool centers a user’s AirPods Pro on the person speaking in front of them, making it easy to listen in a face-to-face conversation. It can also reduce the amount of ambient noise.

In addition, users will be able to find their AirPods Pro and AirPods Max with Apple’s “Find My” bluetooth network. If users believe their lost AirPods are somewhere nearby, they can also select ‘play sound’ in the Find My app and the AirPods will make a squeaking sound, all very useful as people relive life outside. from their house.

Underscored: Three Apple products are discounted from 15% to 22%

One thought on “Apple unveils new features for post-pandemic life”