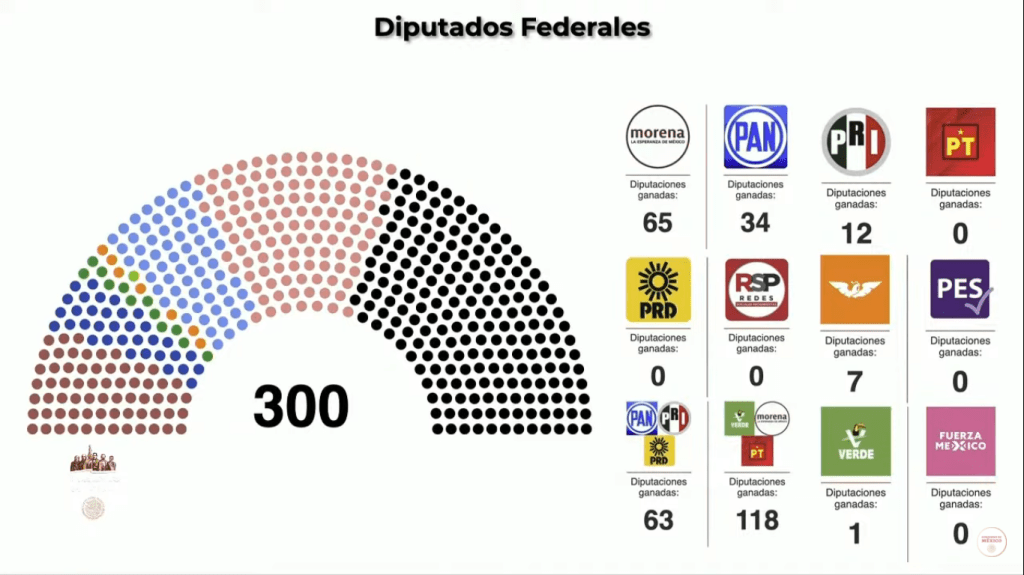 The balance of preliminary results for Morena 0:42

(CNN Spanish) – Sunday marked a before and after for the National Regeneration Movement (Morena), a political party that brought Mexican President Andrés Manuel López Obrador to power in 2018.

Morena reached the midterm elections on Sunday – which were the largest in the history of the country – with full dominance in the Chamber of Deputies, in the mayoralties that make up Mexico City and some states.

But, according to the Preliminary Electoral Results Program (PREP), the panorama changed on these fronts, in some cases positively for Morena and in others with loss of dominance for AMLO’s party.

López Obrador: There were free and fair elections 7:27

Morena in the Chamber of Deputies

The PREP of Sunday’s elections indicates that Morena would have between 190 and 203 legislators in the Chamber of Deputies for the period 2021-2024, counting both those with a relative majority (direct election) and those with proportional representation (the so-called multi-member) .

Its allies, the PREP indicates, would have the following places in the lower house: the Labor Party (PT) would add between 35 and 41 legislators; and the Green Ecologist Party of Mexico (PVEM) would obtain between 40 and 48.

With these legislators, Morena and his allies would easily have a simple majority to approve issues such as the budget each year; however, they would not reach the qualified majority, which is needed to approve changes to the Constitution.

“The absolute majority does not legally exist; it is a simple majority or a qualified majority in the case of the Chambers (of Deputies and the Senate), ”López Obrador commented on Monday in his morning conference.

In contrast, Morena currently has 253 legislators (among those with a relative majority and multi-member) in the Chamber of DeputiesTherefore, this election would mean a decrease of around 50 seats for López Obrador’s party.

The president of Mexico said at the conference that, regarding the deputies of direct election, Morena and his allies (PT and PVEM) will have around 184 seats out of a total of 300 by the principle of relative majority for the LXV Legislature (period 2021-2024).

After the intermediate election, these would be the deputies of each political party by the principle of relative majority for the period 2021-2024. The table of the image was shared at the AMLO conference on Monday, June 7.

However, this statement by AMLO can be refuted, since, according to information from the Chamber of Deputies, the current LXIV Legislature (2018-2021) has 162 deputies only from Morena. If those of his ally PT, which are 40, are added, these two parties reach 202 seats, 18 more than those indicated by the president of Mexico for the period 2021-2024.

If the deputies currently held by the PVEM and the Encuentro Solidario Party (PES, which was an ally of Morena in 2018) are also added, the total in the current Legislature would go from 202 to 226 legislators in the lower house with a relative majority.

In 2018, Morena swept the Mexican capital, this by taking the government of 11 mayors out of a total of 16 that make up the territorial division of Mexico City.

The mayoralties in blue were all those that Morena won in 2018 (Image: INE)

However, three years later, the picture changed in the capital. According to the PREP, the PAN together with its allies (PRD and PRI) won nine mayoralties, when in 2018 they only obtained five.

Meanwhile, Morena, in alliance with the PT, won a total of 7 mayoralties in Sunday’s elections, according to the PREP. This means that the opposition to Morena has more than half of Mexico City.

The dark gray city halls were won by Morena in Sunday’s elections; all the others are from the opposition. (Image: INE)

What caused this drastic change in the capital of the country? López Obrador said that “we have to work more with the people here in Mexico City because it is a contrast,” he said at the conference this Monday.

López Obrador indicated this Monday that Morena “governed one of the 15 states” that were at stake in Sunday’s elections.

“The party that we founded governed a state of the 15 and not only wins that state again, but also wins many others, so progress was made,” commented the president of Mexico.

The state that Morena ruled was Baja California, which he won again in the elections largest in history.

“What was reaffirmed yesterday is that the transformation policy continue and the people decided it,” said López Obrador.

1 thought on “A before and after for Morena: this is how AMLO’s party remains after the elections”