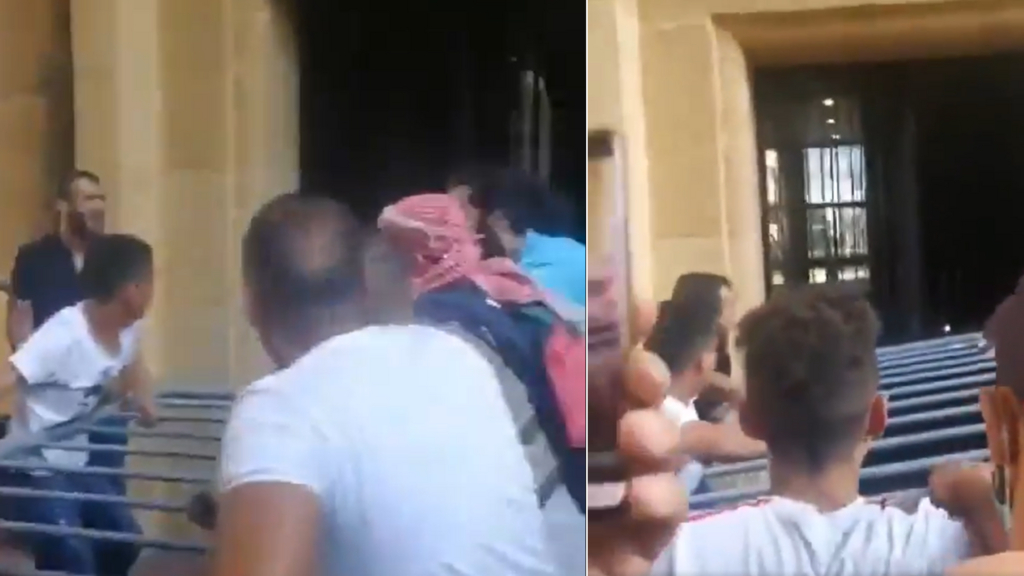 Almost two years after the start of the economic crisis, the Lebanese still do not see their situation improving. On Sunday June 6, dozens of people gathered in central Beirut to denounce the government deemed “corrupt” and “incompetent”. Protesters even tried to force the door of the Ministry of the Economy, before being dispersed by the police.

The call to demonstrate was launched on social networks by the collective “The revolutionaries of October 17”, Movement behind the protests that have rocked the country since October 2019.

Very upset, a group of protesters tried to break down the door of the building housing the Ministry of the Economy, as shown in these images posted on social networks, but the police intervened quickly to prevent them. .

Video showing protesters trying to break down the door of the headquarters of the Ministry of the Economy with a road barrier, Sunday June 6 in Beirut.


Video showing the police arriving on the scene to disperse the demonstrators.

Sara Hamoud is editor-in-chief of the site Lebanon and the word, a citizen media which covers social movements in Lebanon in particular.

On the other hand, rumors of the lifting of state subsidies on gasoline created panic, and people rushed to gas stations. This caused a shortage and a rise in prices. In front of these service stations there are lines of about fifty cars. Many people can no longer get to their jobs because of the long waits and shortages. People are at their end, they can’t take it anymore.

Service station union advisor Fadi Abou Chakra said on May 12 that there would be no lifting of subsidies on the price of gasoline in “short term”, Without further clarification.

– >> Read on Observers: In Lebanon, anger against traders “accused of causing a shortage of basic products”

Dizzying fall of the Lebanese pound, explosion of unemployment: Lebanon is going through the worst economic crisis in its history, which has pushed half of the population below the poverty line. “The economic and financial crisis is likely to rank among the ten, if not the three most serious crisis episodes globally since the mid-nineteenth century,” said a World Bank report, released on June 1.

This economic crisis is exacerbated by the Convid-19 pandemic, and the double explosion at the port of Beirut in August 2020, which left more than 200 dead and destroyed entire neighborhoods of the capital.

The country has also been living without a government since August 10, 2020, the date of the resignation of Prime Minister Hassan Diab following the explosions in Beirut. The political quarrels drag on between in particular the Prime Minister, Saad Hariri, and the president, Michel Aoun. However, international institutions such as the International Monetary Fund (IMF) have conditioned their aid by forming a government capable of carrying out reforms.

1 thought on “In Lebanon, an attempt to storm the Ministry of the Economy: “People are at the end of the line””