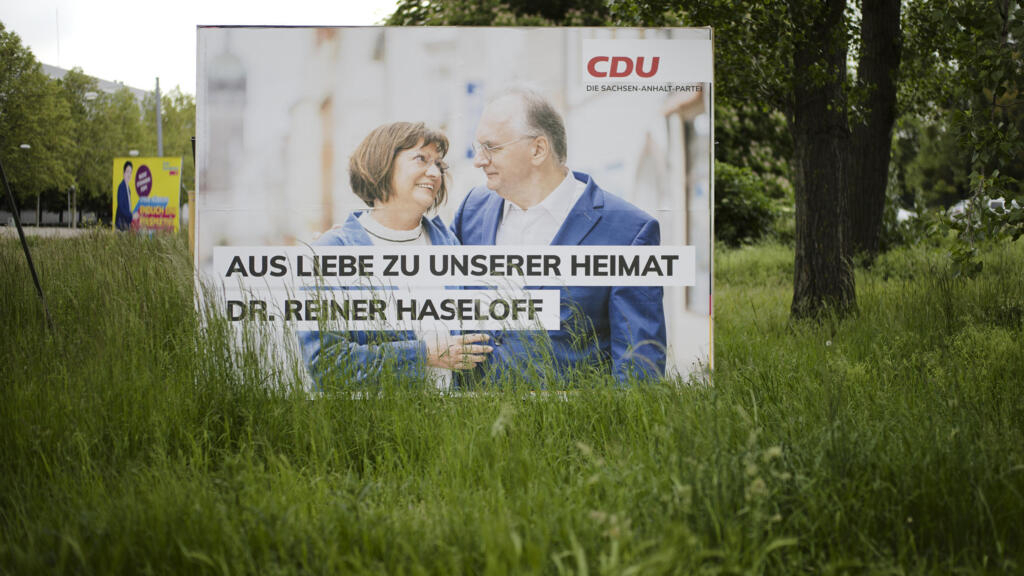 Largely victorious on Sunday in a regional test ballot, the German conservatives are reviving and consolidating their chances in the battle for Angela Merkel’s succession in September against the Greens, their main rival in decline.

The German conservatives won hands down, Sunday, June 6, a crucial regional election in the former GDR and garnered a reassuring success for the party leader and contender for Angela Merkel’s succession after the September legislative elections.

According to the provisional results, the Christian Democratic Union (CDU) obtains around 37% of the vote, against 21% for the far right of the Alternative for Germany (AfD) in this ballot in Saxony-Anhalt, in the West Berlin, the last before the national elections on September 26 which will mark the end of Angela Merkel’s 16 years in the chancellery.

The right, carried by the popular head of the regional government Reiner Haseloff, improved its score by nearly 6 points, while the far right fell slightly.

“This is a sensational result. It’s a good day for the CDU,” said CDU Secretary General Paul Ziemiak.

“People voted against the AfD (…), we fought in a united way, it is also a message in the direction of Berlin”, estimated for his part Reiner Haseloff.

The biggest party in Germany trembled in Saxony-Anhalt: while most opinion polls gave it the advantage, it was followed by the AfD. A victory for the far right, unprecedented in a regional election, had even been predicted in a poll.

“A success of Armin Laschet”, aspiring to succeed Merkel

The result “of course gives us an impetus” for the national election and “it is also a success of Armin Laschet”, the head of the CDU since January, estimated the leader of the parliamentary group of the right, Ralf Brinkhaus. .

Unpopular, contested even within his own ranks, the aspirant to succeed Angela Merkel sorely needed success to rally his troops and consolidate the position of the conservatives who, after falling behind the Greens in voting intentions in the national level, have regained the lead in the polls.

Even if the criticisms against him “will not completely disappear, they will be less noisy”, estimates the daily Süddeutsche Zeitung.

>> To see: “Where is Germany, ten years after its decision to phase out nuclear?”

The largest German party has gone through a crisis of confidence, linked to the government’s management of the third wave of the coronavirus epidemic, which some say failed, and to the corruption scandals of its deputies during contracts for the purchase of protective masks .

The formation, which had suffered two stinging setbacks in March during regional elections, also suffered from a fierce internal struggle: the candidacy of Armin Laschet was contested by the leader of the Bavarian party CSU, Markus Söder, judged by many more fit to lead the national campaign. Armin Laschet ended up winning but remains unloved in the country.

“It would be premature to say that the candidate Armin Laschet can now breathe,” said the newspaper Der Spiegel for its part. “The main opponent at the national level will not be the extreme right, but the Greens,” warns the weekly on its online edition.

Polarization of the vote between CDU and AfD

If the AfD retreated a little during this regional vote, it remains by far the second political force in the region, a position it has occupied since 2016.

Reiner Haseloff has clearly ruled out alliances with the far right, although some members of his party have flirted with the idea in recent years. He has led the Land for five years, at the helm of an unprecedented coalition in the country, with the Greens and the Social Democrats of the SPD.

According to the provisional results, he could renew her, even if the SPD has again lost votes.

Environmentalists, traditionally weak in the former GDR, have progressed slightly with about 6.2% of the vote, but did not hide their disappointment: “We had hoped for more from these regional elections,” admitted their candidate for the vote. Chancellery Annalena Baerbock, judging, like the SPD, to have paid the price for the polarization of the vote between conservatives and the extreme right.

Reiner Haseloff could also consider another configuration with the liberals of the FDP, who will return to the regional parliament.

Very marked by the coal industry, the Land of Saxony-Anhalt is one of the eastern states most affected by the exodus of its inhabitants since German reunification in 1990.

A fertile ground for the AfD, which has built its success by fueling fears about the influx of migrants into the country in 2015 and regularly accuses Berlin of having neglected the regions of the former GDR. Since the start of the pandemic, the party has straddled conspiracy theories, wooing opponents of health restrictions.

One thought on “In Germany, victory in Saxony-Anhalt reassures CDU before Angela Merkel leaves”