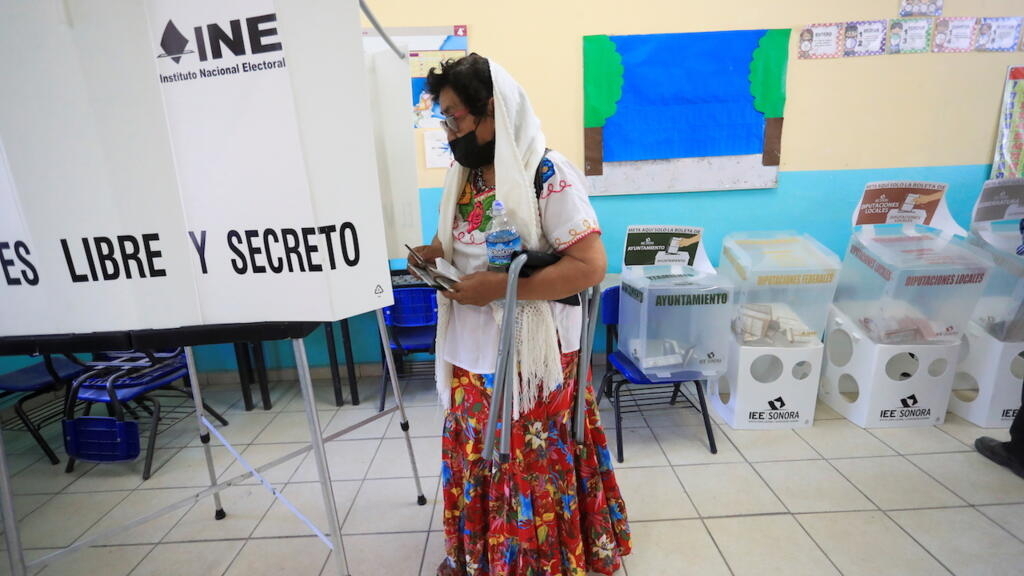 Mexico’s ruling party lost an absolute majority and a qualified majority along with its allies in the Chamber of Deputies in the midterm elections on Sunday, according to a first official estimate.

Andres Manuel Lopez Obrador’s party emerged weakened on Sunday, June 6, from the legislative elections in Mexico which had taken the form of a mid-term test for the left-wing Mexican president, according to a first official estimate.

The president’s Morena party thus lost the absolute majority and the qualified majority with its allies in the Chamber of Deputies, according to the first ranges given by the National Electoral Institute (INE).

According to the INE, the formation of the president will have between 190 and 203 of the 500 seats, losing the absolute majority (half plus one) alone and the qualified majority (two thirds of the seats) that he enjoyed with his three parties. allies. This qualified majority is necessary to pass the constitutional reforms advocated by the leftist president.

In addition, the National Action Party (PAN), the Institutional Revolutionary Party (PRI) and the Democratic Revolution Party, which presented themselves as a coalition, will total between 181 and 213 seats, according to the INE. They currently total 139 deputies.

>> To see: Texas-Mexico border: authorities overwhelmed by the migration crisis

“The final results will emerge from the counting which will begin next Wednesday,” INE President Lorenzo Córdova said in a press briefing.

The election was marked by the murder of five polling station officials the day before the ballot, when armed men ambushed a group of people who were transporting election materials in a van, in a locality of the State of Chiapas, in the south of the country, according to the attorney general’s office.

The attack added to the toll of a campaign that has seen at least 90 politicians killed since September, including 36 candidates or pre-candidates, according to Etellekt, a consulting firm.

The macabre discovery of two human heads in two polling stations in Tijuana, a city on the border with the United States, has added to the already heavy climate.

The last polling stations had closed at 8 p.m. local time (1 a.m. GMT) after 10 hours of voting to renew the Chamber of Deputies, some 20,000 regional stations and 15 of the 32 governorates.

Some 95 million Mexicans were invited to this referendum-like ballot for “AMLO”, the acronym of the left-wing president elected for 6 years in 2018.

>> To read: After the Mexico City metro accident, the power under fire from critics

In this climate of great violence, the secretary of public security, Rosa Zéla Rodriguez, affirmed that areas of violence had been identified during the election day.

In Guerrero, one of the most violent states in the country, members of the community civilian police patrolled throughout the day.

“Members of organized crime come to divide people, they don’t let them vote freely,” warned Isaías Posotema, one of the police officers in Chilapa, an area plagued by gangs.

The INE said that due to disturbances of public order, 20 polling stations out of a total of 162,000 could not be set up.

No sanction vote despite the Covid-19 figures

“The stake is neither more nor less than the future of Mexico”, estimates Pamela Star, professor at the University of Southern California while underlining that “the voters will have to choose between two visions of future for Mexico: that AMLO reforms or a return to an older policy “.

Although Mexico is one of the countries hardest hit by the Covid-19, the prospect of a sanction vote seems to be receding with the retreat of the indicators of the health crisis, according to several polls.

“They never had a plan, and they still haven’t,” said Claudia Cervantes, 49, who works in a public hospital and has just voted in Anahuac, a working-class neighborhood in Mexico City.

>> To see: The Covid-19 has killed more than a million people in Latin America and the Caribbean

Jorge Hernandez, a 52-year-old waiter, observes conversely that “previous governments have not faced a pandemic. Everyone sees the bad things and ignores the good”.

In fact, AMLO had so far maintained a popularity rating of over 60% and should retain a comfortable majority.

Mexico, a country of 126 million inhabitants, has recorded nearly 229,000 consecutive deaths from Covid-19. The death rate is the fourth in the world in absolute numbers and the 19th per 100,000 inhabitants.

The Mexican economy, the second largest in Latin America, contracted 8.5% in 2020 amid tight spending controls by the government, which, along with the autonomous central bank, is forecasting a 6-7 rebound. % this year.

1 thought on “Legislative in Mexico: the presidential party, in retreat, loses the absolute majority”