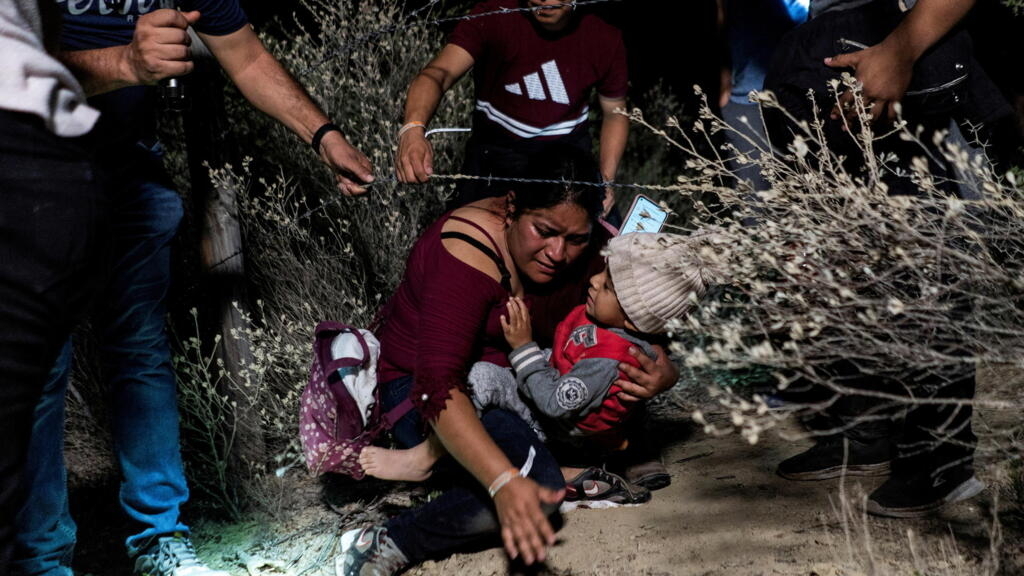 The American vice-president has been on tour since Sunday in Guatemala and Mexico to affirm the will of the United States to help the populations of these countries in order to encourage them to stay there.

Kamala Harris arrived in Guatemala on Sunday, June 6, before going to Mexico, a first international trip for the American vice-president who says she wants to “give hope” to a region from which the majority of arriving migrants come. at the southern border of the United States.

Charged by Joe Biden in March with the sensitive issue of illegal immigration, the former presidential candidate has so far remained in the background on this thorny issue, and more generally discreet since his arrival at the White House on January 20 .

She now wants to develop a comprehensive strategy to tackle the causes of the influx of thousands of migrants which is complicating the start of the Democratic president’s mandate. A “difficult” task, according to Michael Shifter, president of the think tank Inter-American Dialogue.

“We have to give people a feeling of hope, that the aid is arriving, that if they stay (in their countries of origin), it will improve”, insists the ex-senator from California.

After a technical problem that forced her plane to turn around just after takeoff, the vice-president finally landed at the air base south of Guatemala, where she was greeted by the Guatemalan foreign minister. , Pedro Brolo, before a meeting scheduled for Monday with President Alejandro Giammattei.

Outside the base, about thirty people, mostly former right-wing soldiers, sympathizers of former President Donald Trump, demonstrated against this visit with cries of “Kamala, outside” or “Kamala, get involved. of your business “.

On Tuesday, the Vice-President will be in Mexico to meet with President Andres Manuel Lopez Obrador. She will also meet with representatives of civil society, and union and employer leaders, says her team.

Kamala Harris said she wanted to have “very frank and honest conversations” about “the need” to tackle corruption, crime and violence in Guatemala, especially when these evils target “some of the most vulnerable populations”.

She “says what she thinks, which is good. She is frank,” admitted the Guatemalan president on CBS, in an interview broadcast on Sunday.

>> To see: United States: the authorities overwhelmed by the arrivals of migrants

For the Mexican Minister of Foreign Affairs, Marcelo Ebrard, it will mainly be a question of finding agreements “to accelerate the growth of investments and social welfare in southern Mexico, as well as in Guatemala, Honduras and El Salvador. , so that emigration is only an option and not an obligation because of poverty and insecurity “.

The number of undocumented migrants arrested at the border between Mexico and the United States reached its highest level in 15 years in April. Among these more than 178,600 migrants – including minors who arrived alone – 82% came from Mexico and the “northern triangle” of Central America – Guatemala, Honduras and El Salvador.

The millions of doses of anti-Covid vaccines promised by Washington to Latin America should also be mentioned. Kamala Harris warned the Guatemalan and Mexican heads of state directly by telephone on Thursday, just before Joe Biden announced that a first tranche of six million doses would be distributed in Latin America and the Caribbean through the Covax mechanism, and that another six million would be delivered directly by Washington to partner countries such as Mexico, Canada or Egypt.

“Conditions have deteriorated considerably since 2014”

“A real commitment” on the quantity of vaccines to be sent to the countries of the northern triangle “would be a very positive result” of the trip of Kamala Harris, judge Rebecca Bill Chavez, expert in questions of security and democracy.

The vice-president’s tour is part of Joe Biden’s promise to adopt a more “humane” migration policy after the harsh approach of his predecessor Donald Trump.

But the challenges facing Kamala Harris seem more complex than those faced by the Democratic president when he was in charge of the same file, as number two to Barack Obama (2009-2017).

“Conditions have deteriorated considerably since 2014,” confirms Michael Shifter, according to whom the pandemic has greatly aggravated the economic situation and the violence. The task of the former prosecutor therefore promises to be “much more difficult”, with “much more problematic partners”.

Several politicians in the “northern triangle” were named in May by the Biden administration as “corrupt officials”. And Honduran President Juan Orlando Hernandez has been indicted by a New York court in connection with his brother’s conviction for trafficking cocaine in the United States.

The Republican opposition, she accuses Joe Biden of being responsible for a “border catastrophe”, affirming that he created a real breath of fresh air by relaxing the migration policies of his predecessor.

One thought on “Migrants: Kamala Harris travels to Latin America to carry message of “hope””