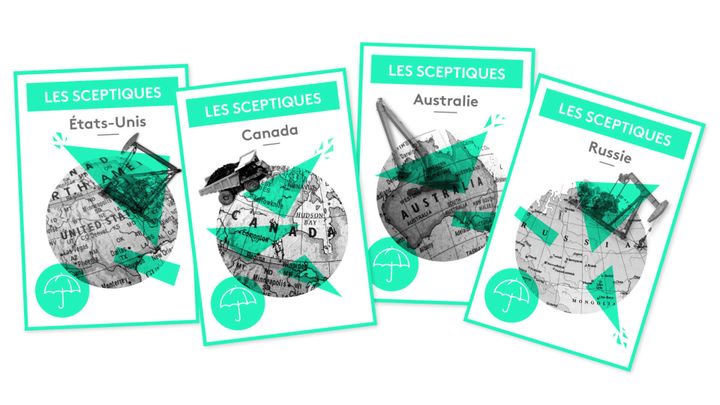 In the fight against climate change, there are countries that are dragging their feet and those that already have them in the water. Those who have already taken advantage of fossil fuels and those who would like to do the same to improve the standard of living of their population. As COP26 takes place from October 31 to November 12 in Glasgow, climate negotiations have drawn, dexhausted the signing of the Climate Convention in 1992, new “continents” and new coalitions on the world map.

A first dividing line was made twenty-nine years ago between the industrialized countries and the others, to record the historical responsibility of the former in the emission of greenhouse gases (GHG), engines of global warming. Since then, other cleavages have appeared to form “families” of countries, according to their particular interests. These alliances are changing: some countries appear in several circles and others may change depending on the subjects negotiated. But they give a good overview of the current climatic contests. Franceinfo presents the six main families of the COP negotiations.

1The “skeptics”, these industrialized countries in no hurry to reduce their emissions

Positions: along with others, these countries are historically part of the Umbrella Group*. This “umbrella group” was formed in the wake of the Kyoto Protocol (1997) to bring together industrialized countries outside the EU. Its members have always spoken out against the extension of this protocol and against new reduction commitments in this more restrictive framework than the Paris Agreement.

Five of these “reluctant” countries are major producers of fossil fuels, the combustion of which is the main cause of global warming: coal for Australia and the United States, oil for Norway and Russia, gas shale for the United States, tar sands for Canada or gas for Russia.

Today, they are still considered “bad students”, with action against climate change deemed insufficient or seriously insufficient by the consortium Climate Action Tracker *. After burying the Kyoto Protocol, the United States almost reoffended with the Paris Agreement, which they temporarily left under the leadership of Donald Trump. Canada continues to build miles of pipelines to export its unconventional oil, among the most CO2 emitters on the planet. And Australia, which continues to defend coal tooth and nail, has been tricked by CNN* of the title again “bad” of the COP.

2The “lucid”, these industrialized countries which want to be exemplary 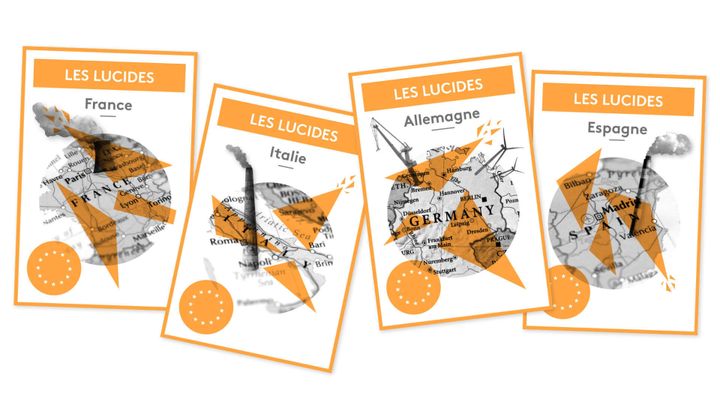 Members : the 27 states of the European Union and the United Kingdom.

Positions: Faced with American reluctance, the EU has historically taken the lead in climate negotiations. “Depending on the period, it was able to play a leading role in the process, pushing for more ambitious agreements and unilaterally adopting emission reduction targets on the eve of key dates”, note researchers Amy Dahan and Stefan Aykut in their reference book Governing the climate (Sciences Po Press, 2014). The European Economic Community (EEC), ancestor of the EU, is thus the only group of countries to have signed the Kyoto Protocol. In 2021, the European Commission presented an ambitious Green Pact to reduce its CO2 emissions by 55% by 2030.

This leadership is justified by the absence of significant reserves of fossil fuels on the Old Continent (excluding coal in some countries). Promoting the transition to renewable energies such as wind or solar is also of geopolitical interest since it makes it possible to reduce dependence on oil from the Gulf countries or on gas from Russia.

European countries are, however, far from being as exemplary as they claim. Only UK politics are judged “almost sufficient” by Climate Action Tracker, when the entire EU is assigned the comment “insufficient”. The NGO believes that the EU is not doing enough to get out of coal and finance aid to poor countries. Finally, she considers that the European directives are not always applied by the member states. Certain countries, such as Poland or Germany, remain very attached to coal, the fossil fuel that emits the most GHGs. Even a country like France is not living up to its commitments, as the High Council for the Climate regularly reminds us.

3The “reticent”, these emerging countries which claim the right to emit as much as the West 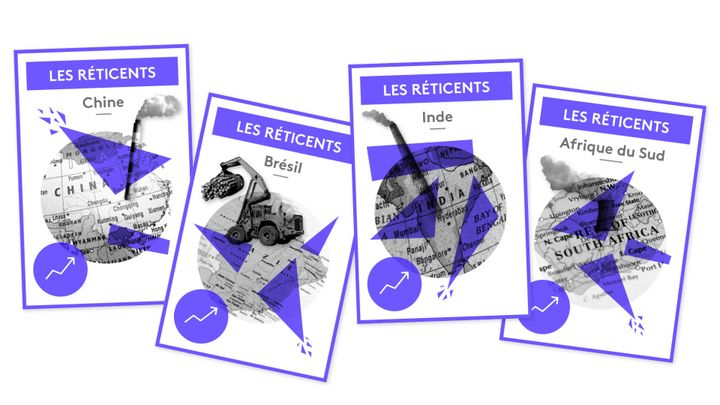 Positions: Unlike the developed countries, these four countries, whose rise to power took place at the same time as the climate negotiations, were not concerned by the emission reductions under the Kyoto Protocol, by virtue of the principle of “common but differentiated responsibilities”. This precept remains at the heart of their position, even though China has since become the world’s leading emitter of GHGs. If it could be used from “strategically” by these countries for “justify their inaction”, this principle “also reflects a sincere conviction that, on the one hand, the industrialized countries are primarily responsible for the degradation of the global environment. On the other, the developing countries have other more urgent priorities”, analyze the authors of Governing the climate.

These countries are all the more reluctant to make concessions on their emissions since coal occupies an important place in their energy mix: 57.64% in China*, 54.67% in India * and 70.61% in South Africa*. In Brazil, the mix is ​​better, with 46.18% of primary energy generated by renewables (mainly hydropower). But the South American giant emits a lot of GHGs by deforesting the Amazon (44% of the country’s emissions in 2018*).

Today, if China multiplies ambitious declarations and promises, these countries are not among the good students. Only South Africa’s action is rated “insufficient” by Climate Action Tracker, when the other three are noted “very insufficient”. Chinese President Xi Jinping will not make the trip to Glasgow.

4The “diehards”, those who want nothing to change 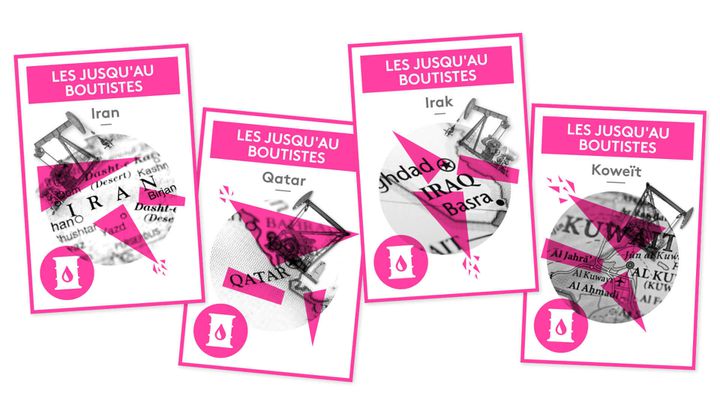 Positions: these countries are considered bad geniuses on the climate scene, where they keep, in the words of Amy Dahan and Stefan Aykut, “a strong capacity to harm”. “Saudi Arabia, in particular, is a brake on any progress and seeks compensation for the fact that the world will use less oil in the future.”, they write. In 2015, in Paris, Saudi Arabia tried, unsuccessfully, to erase the reference to 1.5 ° C from the agreement. Iran simply has not signed the text.

The position of these countries is understandable. The export of oil or gas is the keystone of their economy and, for the Gulf countries, of their prosperity. Some, like Iraq, are also embroiled in complex military and political crises. If Saudi Arabia recently announced that it was aiming for carbon neutrality by 2060, this promise appears hardly credible since the kingdom does not intend to reduce its oil exports. In mid-October, Saudi oil giant Aramco had said it wanted to increase its daily production capacity from 12 to 13 million barrels by 2027.

5The “submerged”, these islands which require a strong and rapid reaction to the rising waters 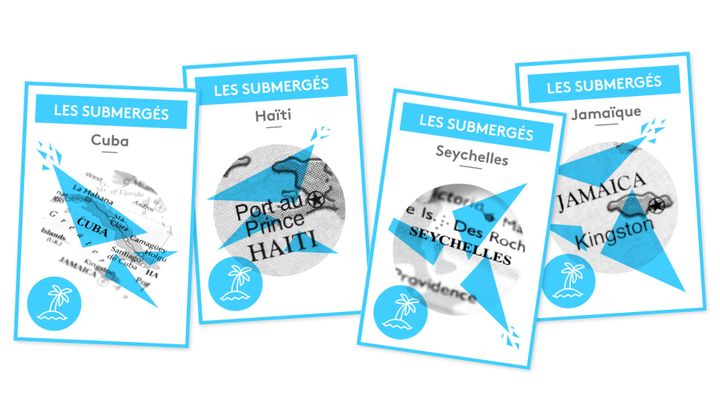 Members : 39 countries grouped together in the alliance of small island states, including the Comoros, Cuba, Fiji and the Seychelles.

Positions: Although the effects of global warming are now being felt all over the world, island states, threatened by rising sea levels, have historically been on the front line to demand strong and rapid action from the international community. They quickly came together in an organization, the Aosis*, for “alliance of small island states”. We owe them in particular the integration in the negotiations of the objective of 1.5 ° C of warming, mentioned in the Paris agreement in 2015.

These countries also have in common that, with a few exceptions such as Cuba, they have no hydrocarbon deposits and have emitted very few GHGs. Among them are the least emitting countries in history, such as Niue Island (272,287 tonnes against 410 billion for the United States) or Tuvalu (276,527 tonnes), according to site data. Our World in Data*.

Today, these countries continue to push both for rapid reductions in GHG emissions and for increased aid to poor countries. September 16, in a joint statement*, they called “the main emitters, particularly the G20, to stop all subsidies to fossil fuels from 2023 and to accelerate their actions for a transition to a low-emission economy”.

6The “vulnerable”, these countries very threatened in spite of their weak responsibility 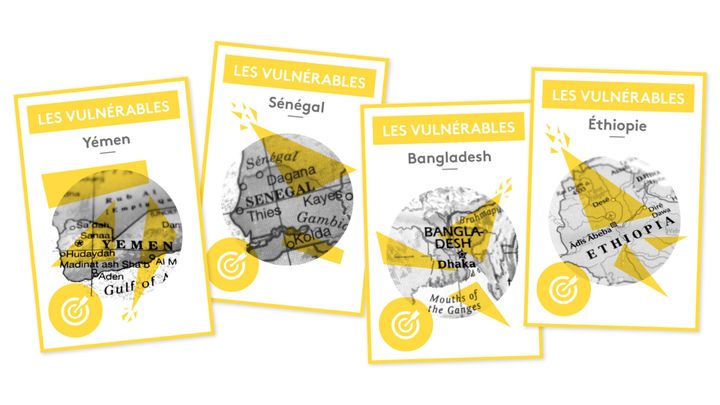 Members : 48 countries grouped together in the group of “least developed countries”, including the Central African Republic, Ethiopia, Nepal and Senegal.

Positions: these countries share with the island states – some, like Haiti, appear in both groups – a great vulnerability to warming and a very low responsibility in this crisis. They have historically fought to include in the climate negotiations the principle of financial assistance from developed countries. In Copenhagen, in 2009, they obtained a commitment of 100 billion dollars per year by 2020 – an unfulfilled promise since this aid is capped at around 80 billion – and the Paris agreement explicitly mentions this principle.

Before COP26, they fought to relax the quarantine rules linked to Covid-19* in order to be able to travel to Glasgow and have again called for significant reductions in GHGs. “The least developed countries are the most affected by global warming even if they have contributed the least to causing it. Rich countries with great responsibility must urgently reduce their emissions, and increase their support for developing countries”, To declared their spokesperson*, before adding: “The funding provided is far less than the needs of our countries and our people, and this deficit is costing lives.”

* Links marked with an asterisk refer to content in English.

1 thought on “COP26: skeptics, die-hards, overwhelmed … We present to you the six major families of negotiating countries – franceinfo”