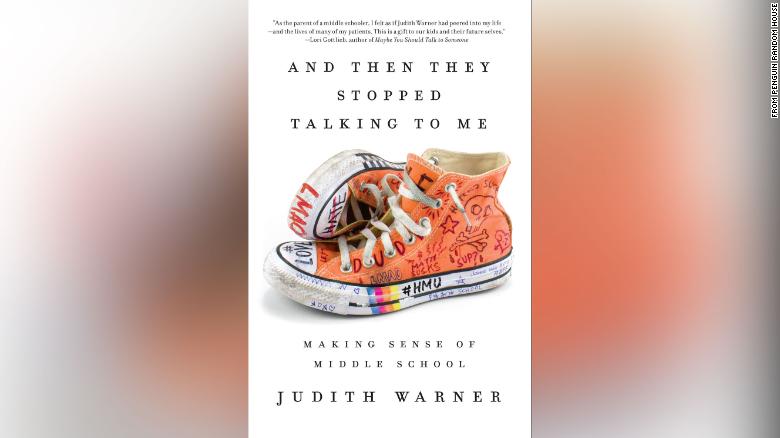 (CNN) – During the school closings, educators did their best to recreate classroom learning via the internet. But what about the kind of learning that occurs in the hallways between classes, or on the playground during recess and after school?

Those in-person social interactions, the kind that emotionally challenge, enlighten, and torment our children, couldn’t be transferred to video calls.

Now the children are back in the classroom, in the presence of the classmates with whom they get along, of those they had forgotten and of whom they did not really want to see again. Friendships in later childhood are difficult in and of themselves, since the task of discovering who we are in the context of others is a rather complicated process. If we add a year or more away from a physical campus, the social connection can be even more complicated.

It’s important for tweens to know they have a trusted adult with whom they can discuss difficult social situations, said author Judith Warner.

CNN spoke with Judith Warner, author of “And Then They Stopped Talking To Me: Making Sense of Middle School“, on how to help make this transition as painless as possible for children. Warner explained the discomfort of reaclimating to social life as an older child, the brain chemistry of this period, and how well-meaning adults can complicate things for their children. Although her book and research focus on high school kids, the lessons and ideas apply to all ages, including (sometimes) adults.

This interview was summarized and edited for clarity.

CNN: How can it be that all that free time from face-to-face school is complicating the lives of some children now that they are back?

Judith Warner: Children are experiencing a combination of being excited to go out and people-see and doing at least some of the same activities they liked to do before, and going through an adjustment period to being back.

Children who have difficulty socializing or readjusting may experience sensory overload and be exhausted. On the one hand, socialization is programmed. But on the other hand, if you don’t socialize, the wiring doesn’t develop at the same speed. Social skills, like academics, are strengthened with practice. After a year and a half of absence, it stands to reason that children’s social skills are rusty. Mine are rusty too.

CNN: Are there any benefits of that free time that adults should try to encourage or preserve?

Warner: During that long break from the classroom, many tweens and teens were reunited with friends they had drifted away from, perhaps because they weren’t in the same social circle or because one was on the way to being “cool” and the other was not. During the pandemic, the social geography of the school did not exist, with all its little groups and informal rules about who sits where at recess. That created a disruption, in a sometimes positive sense, because it meant that the children felt freer to be in touch with whoever they wanted to be in touch with.

CNN: What is happening in the brains of tweens and teens that makes them especially sensitive to the disruption of life we ​​just experienced?

Warner: There are important parts of the brain that have a large growth spurt just around puberty. As a result, children of this age develop an incredibly sharp memory, and everything affects them more. They are also predisposed to seek approval and popularity from their peers. But the approval and popularity of teens is based on the perception and appearance of power, not on people actually accepting them.

It’s a kind of cosmic joke. Suddenly you are more aware of how others see you right at the moment when evil and bullying are skyrocketing.

But it also has its good side. At this age, children can have wonderful friends, full of joy, and discover all kinds of interests and follow them with passion. The world opens up to them, and that can be good or bad.

CNN: How should adults talk to children about any social discomfort they may be experiencing right now?

Warner: To begin with, it is important to follow their lead and not bring it up if the children are not doing it and they seem fine. I think we all tend to identify excessively with our children, so if it hurts them, so do we. We also tend to hold on to it longer than they do and have it over us like a dark cloud, when they are over it.

It’s also important to make sure children know they have someone to turn to to discuss difficult social situations. It may be a parent, or someone from the school, such as a teacher or a counselor, who they trust and feel close to and who gives them an objective opinion.

When your kids are at home, sitting in the kitchen attacking someone, ask them questions. Don’t just accept that so-and-so seems such a thing, as tempting as it may be at times. And don’t just tell them that gossip is horrible, which inevitably fails. Instead, try to get real information about why they are talking about this person like that.

Try to make them see things from the other’s point of view. Help them see them as a real person, because it is difficult to destroy someone when they become a real person with complicated feelings and conflicting emotions like them. This does not mean that they have to like everyone, but they should develop the sense that we should try to protect the feelings of other human beings.

Anything you can do to guide them in the direction of basic kindness is doing both children a favor. Research shows that being competitive doesn’t make people happy, while being generous, kind, and open-minded does.

CNN: You write about how our education system and culture in general contribute to teenage social stress. Where are we going wrong?

Warner: When I started working on the book, I spoke with adults from France, Spain, India, and other countries, and none of them had the negative associations with high school that I did. They didn’t shut up, they didn’t gasp, they didn’t remember it as the worst. I found a corroborating research. Using a series of measurements, American children of high school age were much less happy than their peers in other countries.

Part of this may have to do with the way our school systems separate them. Children may do better in K-8 schools, staying in that homey elementary school atmosphere rather than starting something new during this vulnerable time.

When children feel vulnerable or weak, they are more likely to be cruel. Some districts are already shifting to this (school structure).

Also, the competitive nature of American life, which adults often pass on to their children, doesn’t help either. It erodes our sense of community, solidarity, and kindness because, as psychologist Suniya Luthar explained to me, if everyone is competing for the bronze ring, everyone else is by definition their competitors. That does not create a happy or friendly world.

CNN: Could our collective experience of vulnerability and uncertainty during the pandemic help change that?

Warner: I hope we see tweens and teens experience a version of something I’m noticing with adults: after so long at home, making Zoom calls without dressing professionally, with kids and cats moving in and out of the screen, I think the people are allowing themselves to be a little more human in their professional conversations.

It is as if presenting a perfect face, physically and verbally, has gone the way of dyeing gray hair. It would be great if a similar kind of solidarity were created among children, based on the recognition of our collective vulnerability, and even better if it were sustained while life returns to something akin to normality.

– Elissa Strauss is a regular contributor to CNN, where she writes about the politics and culture of parenting.