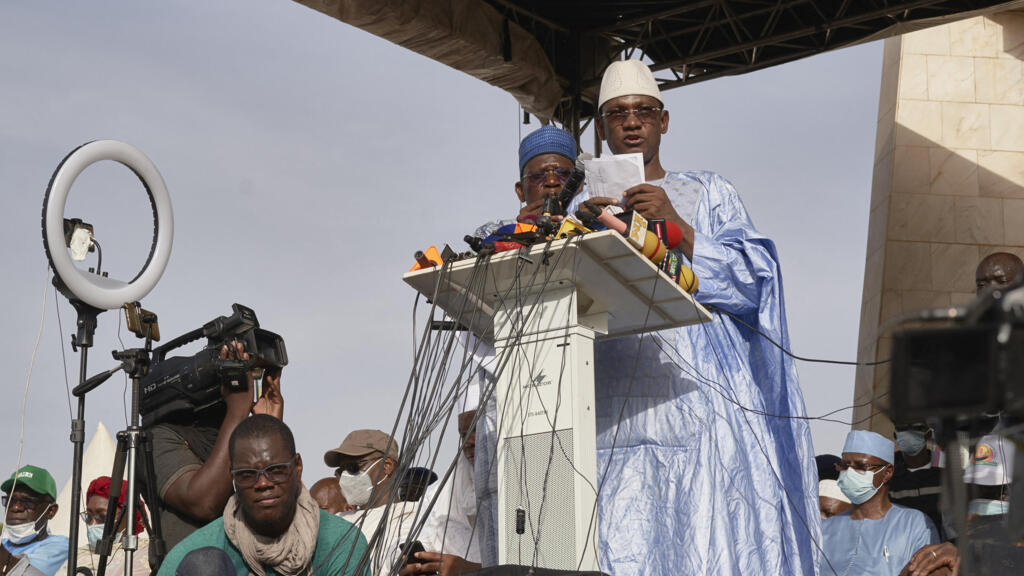 While he is tipped to become the Prime Minister of the Malian transition, this time under military presidency, Choguel Kokalla Maïga said on Friday that his country would keep its international commitments. Words to reassure Paris, shortly after France’s announcement to suspend military cooperation.

An almost official first speech. Choguel Kokalla Maïga, tipped to become the Prime Minister of the Malian transition under military presidency, reassured Friday, June 4, affirming that the country would keep its international commitments. The day before, France had announced its decision to suspend all military cooperation with the Malian forces, after two coups d’état and while demonstrations took place the same day.

A political veteran and now leader of the M5-RFP coalition (Mouvement du 5 Juin – Rassemblement des Forces Patriotiques), he holds the rope to be appointed by Colonel Assimi Goïta Prime Minister of a government supposed to prepare the return to power of the civilians in nine months after two putschs. He could be appointed after the investiture of Colonel Assimi Goïta as president, scheduled for Monday, June 7.

Choguel Kokalla Maïga spoke the day after France announced the suspension of its joint operations with the Malian army, after eight years of close cooperation against the spread of jihadism.

>> To read: French military operations in Mali: “A warning shot from Paris on Colonel Goïta”

Mali, a crucial country for the stability of the Sahel, has just been the scene of a second coup in nine months by Assimi Goïta and the colonels. France is now demanding guarantees that a civilian prime minister will be appointed and that elections will take place in February 2022 with a view to bringing civilians back to power.

Events at the call of the M5

The figure of M5, who spoke in front of several hundred people gathered around the Independence monument, paid tribute to the French soldiers killed in Mali. But “we must say to our friends: our people need to be held by the hand”, he declared, “the invectives, the sanctions, the threats will only complicate the situation”.

The rally at the call of the M5 officially aimed to commemorate the protest which, a year earlier, had shaken the presidency of Ibrahim Boubacar Keïta until a group of colonels, including Assimi Goïta, deposed it on August 18. .

The demonstration was scheduled several days ago. But the warning shot given by the French strategic ally was in many minds.

“Mali must look for other partners, France is not the only country in the world,” said Abdoulaye Cissé, a youngster from M5.

“The Malian people must be grateful to France”, countered Kalou Sow, an official, invoking the dozens of French soldiers who died in the Sahel, “but France must also show its good faith. Eight years without results, this is n ‘ is not easy either “.

The French decision began to materialize on the ground. “The joint Barkhane / FAMa operations are stopped, the French continue alone,” said an official at the Malian staff, referring to the French anti-jihadist force and the Malian Armed Forces.

The colonels had committed after their 2020 putsch and under international pressure to a transition period limited to 18 months and led by civilians.

On May 24, Colonel Goïta, who remained the real strongman of the transition, trampled on this commitment by arresting the President and the Prime Minister. He has since been declared president of the transition by the Constitutional Court.

Thursday evening, France banged its fist on the table. The implications appear significant for a notoriously under-equipped and under-trained Malian army. It has lost hundreds of soldiers to the jihadists.

Barkhane will continue his action, along with the other regional partners, indicated the spokesperson for the French staff, Colonel Frédéric Barbry. But the big joint operations with the Malians, like Equinoxe, in progress, are suspended.

De facto, Barkhane no longer leaves its bases in northern Mali for operations on the ground, said a Western diplomat on condition of anonymity. But it will continue to strike, if the opportunity arises, the jihadist leaders, he continues.

Colonel Goïta has said he intends to hand over the post of Prime Minister to the M5, a movement that he and the colonels had sought to marginalize. The M5 chose Choguel Kokalla Maïga for these functions.

This choice has raised concerns among partners in Mali. Among them are the place that would be given to the influential conservative imam Mahmoud Dicko, tutelary figure of the protest in 2020 which has since distanced himself and the concessions that the Malian leaders would be tempted to make to the jihadists. The imam was absent from the gathering on Friday.