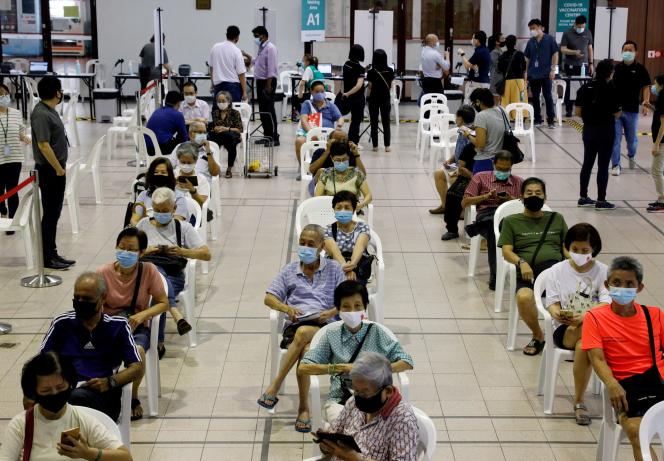 This is the latest argument from opponents of vaccination against Covid-19: the case of Singapore, which is experiencing an epidemic upsurge despite one of the highest vaccination rates, once again proves the ineffectiveness of vaccines.

The founder of the Les Patriotes movement, Florian Philippot, who has been seeking for months to capitalize on conspiratorial and anti-vaccine rhetoric, notably seized on the example. In a message posted on Monday 1er November on social networks, he thus calls out to “Covidists”, those who trust the recommendations of health institutions:

“83% of double vaccinated in Singapore and a curve of cases and deaths which never ceases to explode!” What do covidists say? Nothing, they pretend not to see! Stop! “

83% of double-vaccinated in Singapore and a curve of cases and deaths which never ceases to explode! What do they say … https://t.co/pMXOPqVrIw

The data which is quoted is authentic. But the presentation made of it ignores a central element in understanding the situation: Singapore has recently changed its strategy in the face of Covid-19. Explanations.

According to figures reported by Our World in Data, Singapore had, at the end of October, the fourth highest full vaccination rate against Covid-19 in the world, with nearly 80% of people vaccinated. It is therefore indeed a country where vaccination coverage is very high.

In addition, the garden city with 5.7 million inhabitants is indeed hit by an unprecedented wave. While it had barely more than thirty contaminations identified for a year, their number has multiplied since the beginning of September, reaching peaks of more than 5,000 cases per day, at the end of the month. month of October.

Singapore also has around fifteen daily deaths, while none were recorded during the first seven months of the year. It is therefore not abusive to speak of an explosion of cases and deaths. But the appearance of this wave can be explained.

What Florian Philippot refrains from specifying is that Singapore has made a major shift in its strategy to fight Covid-19, moving from a “zero Covid” strategy to cohabitation with the virus. As Dale Fisher assumes, Professor of Infectious Diseases at the National University of Singapore and Chairman of the UN Global Outbreak Alert and Response Network: “We allow endemicity”, that is to say the usual installation of the disease in the population.

If the epidemic is exploding historically, it is, in fact, because the virus simply did not circulate in the city-state until now, or very little. Taking advantage of its island situation, Singapore, like the Philippines, New Zealand, or in another register, China, has long adopted extremely strict measures: restrictions on air entry, forced quarantines, contact-tracing, etc. These have made it possible to protect the population from the virus, but at the cost of a significant slowdown in economic exchanges and a major impact on daily life.

“A new normal” in which the Covid-19 would become endemic

In June, the ministers of trade and industry, finance and health announced in a joint letter to the national daily Straits Time the transition to “A new normal”, in which, thanks to vaccination, Covid-19 would become endemic, while Singaporeans could gradually abandon quarantines and return to travel and large gatherings.

From this point of view, the increase in the number of cases is not an illustration of the failure of vaccines – they do not always prevent transmission – but an expected consequence of a political choice based, on the contrary, on vaccine protection. The magnitude of the wave testifies, however, to the inability of vaccines to stem the transmission of the Delta variant, which is more contagious, even with a vaccination rate above 80%.

This is the second point on which Mr. Philippot’s message is misleading: it links vaccination and deaths linked to Covid-19. Even though Singapore has one of the highest immunization coverage rates in the world, 17% of the population remains unvaccinated. And it is within the latter that are the most affected by this wave linked to the lifting of restrictions. “Even if the vaccinated people are ten times more numerous than the unvaccinated in the population, it is the unvaccinated who are in the majority in intensive care, who need oxygen, and who end up dying”, notes Dale Fisher, on RFI.

“We have a group of seniors who are still unvaccinated. They weigh 1.5% or slightly less of the total population, and over the past twenty-eight days, they accounted for two-thirds of intensive care occupations and deaths ”, added at the end of October the Minister of Health, Ong Ye Kung.

According to the calculations of Straits Times, unvaccinated people are eight and a half times more likely to die from Covid-19. “We have now reduced our efforts to prevent transmissions, for example, by making quarantines and isolations less onerous. This is due to our high vaccination rate, which means that for the majority of us, Covid-19 is now a much less serious disease. But it means a more deadly pandemic for the unvaccinated ”, laments Alex Cook, associate professor at Saw Swee Hock School of Public Health, Singapore’s national public health university, cited in the same article in Straits Times.

In order to convince the last dissenters to take the plunge, often the elderly, the government introduced in October restrictions on access to public places for unvaccinated people and plans to prohibit them from entering workplaces from 1er January 2022.

1 thought on “Covid-19: why the number of cases is increasing in Singapore, one of the most vaccinated countries in the world”