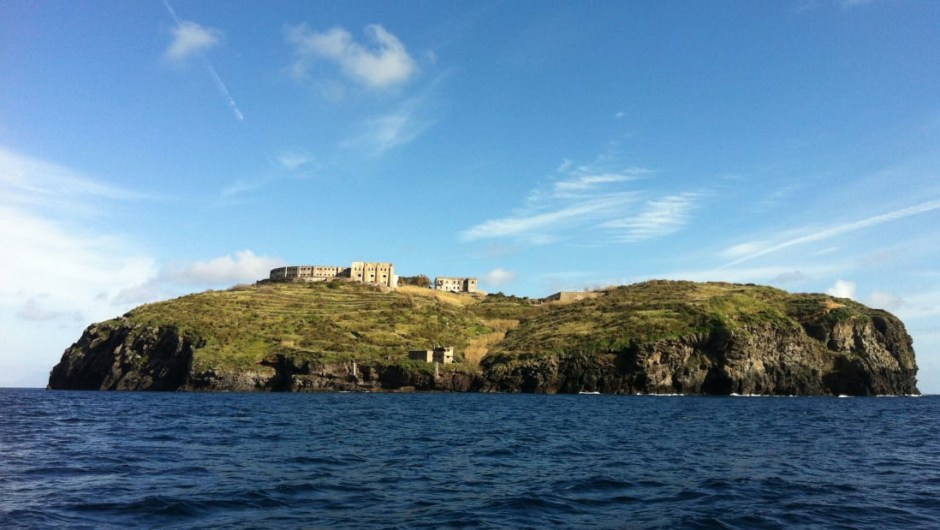 (CNN) – It’s creepy, crumbling, and abandoned. It is inhabited by seagulls, and divers only take a few day trips to annoy them. This is Santo Stefano, a small volcanic island between Rome and Naples, where silence reigns, although not for much longer.

This was once the Alcatraz of Italy. For centuries, criminals, bandits, anarchists and political dissidents were sent here to die forgotten. From the Roman Emperor Augustus – who banished his daughter to the neighboring island of Ventotene – to the fascist regime – which deported here those it considered enemies of the state – rulers throughout history have used Santo Stefano as one of the bleakest places to send those who consider the worst of the worst of their enemies.

In 1965, the jail was closed and the island abandoned. Until now, when he returns from the grave with an ambitious redesign project.

The Italian state is spending € 70 million (US $ 86 million) to breathe new life into Santo Stefano, transforming it into an open-air museum and tourist hotspot on America’s original Alcatraz line. Maintenance work is underway to secure key areas, and a call for proposals will be launched in June on how to renovate this jail.

Silvia Costa, the government commissioner in charge of the redesign, told CNN that the goal is to recover all parts of the colonial prison, from the barracks to the original cisterns, “with an ecological approach that takes into account the uniqueness of the natural habitat of the island ”.

Santo Stefano, a beautiful present that hides a dark past

Santo Stefano and neighboring Ventotene were used as prisons for criminals and dissidents. (Credit: Silvia Marchetti)

Santo Stefano is located within a protected marine park. Currently, it is accessed by fishermen, adventurous swimmers and divers and snorkelers attracted by the giant groupers and friendly barracudas that swim in the translucent waters. The seabed is full of archaeological wonders and a WWII shipwreck.

The island has no dock. The only anchorage point for boats leaving from nearby Ventotene Island, a mile away, is an ancient Roman port with uneven steps carved into the rocks. When the sea is rough, not even a canoe can approach safely.

At the top, lush greenery and palm trees grow over the rusted prison cells, its doors falling off their hinges and paint peeling off the walls. There are collapsed stairs and even a soccer field where inmates once played soccer.

According to the redesign master plan, Santo Stefano will house an open-air multimedia museum on the history of the prison and its inmates, artistic workshops, academic centers and seminars on the European Union.

The permanent display of “walks” will begin at the future pier and will relax through the desert dotted with dry stone walls that were first built by the prisoners.

And the former prison warden’s house and the soccer field changing rooms where inmates bathed after games will be converted into low-cost shelters with about 30 rooms.

The bakery where prisoners made daily bread is expected to become a café-restaurant with a panoramic terrace in the garden where visitors can have a drink in the evening while admiring the sunset. On clear days, the view stretches to Mount Vesuvius and the island of Ischia, 32 kilometers away. Although now abandoned, the garden will be replanted with flowers and plants that once grew there. The inmate gardens will also be reactivated.

“We want the island to attract visitors throughout the year, not just during the busy summer months,” says Costa.

“Tourism must be sustainable, but Santo Stefano will be more than that. It will be a hub for global academics to come together on key issues such as environmental policies, human rights, freedom of expression, European citizenship and Mediterranean dialogue.

Today the island is in a protected marine park. (Credit: Silvia Marchetti)

The master plan establishes the concept and vision for the redesign, which will be shaped by the winning entries for each individual site. The renovation is expected to finish in 2025.

One idea at stake is to present “virtual prisoners”, with voices narrating from the cells, which could be creatively illuminated. The turrets surrounding the prison, the central chapel and the cemetery will also be remodeled, while antique objects found within the buildings, such as photos, furniture and beds, will be displayed. They are also planning a bookstore and apps to guide visitors.

There is also the possibility that the semicircular loggia of the prison becomes a space for shows and events. Its conspicuous horseshoe shape, rather like an inverted amphitheater, is called a panopticon – a type of jail designed to allow guards in the center to see the cells around them. In the middle was a church to symbolize spiritual dominion over souls and constantly remind prisoners of their crimes (or, in the case of political prisoners, “crimes”) and the penance they must do.

“We started from scratch,” says Costa of his ideas.

“It has been closed for decades, in total decline. There is no light, there is no running water. Access is difficult. The renovation focuses on telling the story of the pain suffered in this prison, preserving this symbolic place of memory but looking to the future.

This building was built in the 18th century. (Credit: Silvia Marchetti)

Along with its neighbor Ventotene, Santo Stefano served as a jail since the days of ancient Rome, when it was a place of confinement, rather than a fortress. On one side of the island is the so-called “bathtub”, a kind of natural Jacuzzi carved into the dark rock with steps where Roman guards took their prisoners for a refreshing dip.

With high cliffs and wild vegetation, it was impossible to escape from Santo Stefano. The few who tried drowned.

The 18th century prison ensured strict and centralized control of all cells. It is shaped like Dante’s Inferno: divided into three floors with 33 cells each.

Typical punishments ranged from whipping to standing for hours in the scorching sun without water, with everyone watching the punished prisoner. The inmates, who divided into clans based on political and geographic affiliation, cheered as their enemies screamed in anguish.

They couldn’t even find comfort in nature. All the cells were windowless and faced inside, where the guard patrols were.

Food was scarce: they were mainly bean soups; meat was served once a month.

A particularly dark period in the history of the islands was during fascist rule. Opponents of the regime, including students, were sent to Ventotene and Santo Stefano, and those from Ventotene were allowed to circulate around the island, and the most “dangerous” prisoners imprisoned, and often tortured, in the cells of Santo Stefano. Many died.

After the war, the island returned to being a normal prison. Things improved with the arrival of an enlightened director, Eugenio Perucatti, in the 1950s. He took a more humane approach, making the prison livable and turning it into a small-scale, self-sufficient economy.

Perucatti built a cinema and that soccer field. He established prisoner-run craft shops, established fruit and vegetable plots and the bakery for fresh bread and pizza. The inmates helped clean the jail and were given a special coin to buy things from each other. There were shoemakers, carpenters, bricklayers, and cooks.

Prisoners were allowed to spruce up their cells with pastel paints to make their stay more bearable.

“My grandfather believed in the power of redemption through work, and that every inmate deserved a second chance. It gave them hope, improved their living conditions. Rehabilitation was key ”, says Simone Perucatti, Eugenio’s grandson. The history of his family, as well as the memories they passed on to him, will be part of the museum.

«He moved to the island with his whole family. My dad grew up in jail and he used to tell me about this criminal named Pasquale who took care of him, pampered him and bathed him and walked on an adventure ».

Pasquale had murdered his wife, who had an affair with Pasquale’s father while Pasquale was fighting in World War II. He threw her down the stairs and dismembered her body, but then turned herself in to authorities, Perucatti says.

“My dad, then a child, found it hard to believe that he rubbed shoulders with criminals so terrible that they showed him affection and hugged him.”

Perucatti’s director grandfather, who turned the penal community into one big family, even held his daughter’s wedding reception in prison.

«He made the sewage system, brought electricity and water, opened the cells. The inmates worked to improve the roads and accommodation. They grew cereals and tended the terraced fields. There was a butcher and an optician, goats for fresh milk. My father had a pet lamb, “says Simone Perucatti.

Some locals on the neighboring island of Ventotene still have vivid memories of the jail – they would sail to play against the inmates’ soccer team. Some former guards are still alive. Ventotene restaurateurs recall how criminals on parole sometimes showed up for lunch with their officers.

The prison that sparked a political revolution

The jail has a panoramic style, like an inverted amphitheater (Credit: Silvia Marchetti)

The Santo Stefano remodeling will boost Ventotene’s tourist attraction, authorities hope. Already a tourist destination, it is the stopping point for sunset boat trips that take people out for cocktails on the water. Today, its mosaic of brightly colored fisherman’s huts and ancient grottoes bears few marks from its past.

Today, visitors can even sleep in the former prisoners’ houses, now painted yellow and purple, and eat in their dining rooms in the town square near the Bourbon Castle.

Ventotene’s history is not entirely dark. The preponderance of political prisoners during fascism turned the island into a makeshift training ground for politics and philosophy. Altiero Spinelli, who would become one of the founding fathers of the European Union, was sent here in 1941 as an anti-fascist prisoner. While on the island, he co-wrote the “Ventotene Manifesto,” calling for a united Europe. It started as a text for the Italian Resistance, but later paved the way for European integration.

Other political prisoners included Sandro Pertini, who was imprisoned in Santo Stefano from 1935 to 1943. He later became president of Italy in 1978.

For now, tourists are tanning on the black rocks below the picturesque Ventotene lighthouse. The view of the Santo Stefano prison from here is said to have inspired Spinelli’s ideals of a free and unified Europe.

And with the redevelopment of the island, authorities hope to pay their respects to the people who were imprisoned there, and the politics that inspired the internment of the 20th century.

1 thought on “Italy to renovate its Santo Stefano prison, its own version of Alcatraz prison”