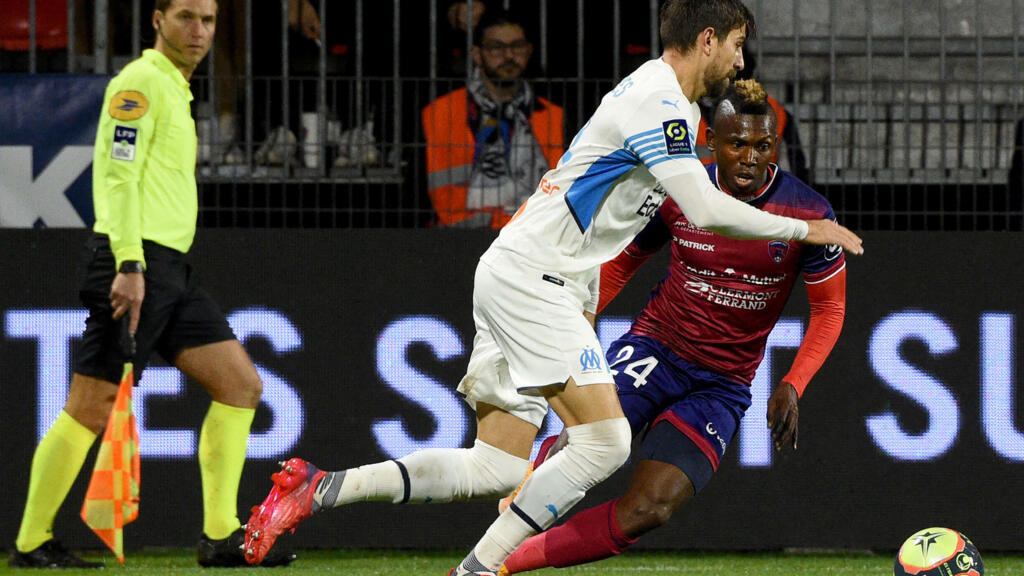 Well in place, Marseille won on the lawn of Clermont (1-0) and thus found the way to the podium, in front of the new Nice dolphin, winner in Angers (1-2). In Spain, Real Madrid brilliantly resists the absence of Karim Benzema by beating Else (2-1), unlike a stuck FC Barcelona, ​​orphan of his coach Ronald Koeman, who concedes a draw (1-1) ) against Alavés.

Rainy match, happy match for the Olymique de Marseille: under a flood in Auvergne, the goal of the Turkish Cengiz Ünder made the Olympians return to victory on the lawn of Clermont (0-1) Sunday, October 31, during the closing match of the 12th day of Ligue 1, marked by the realism of the Phocéens.

OM climbed to 3rd place, one point away from Nice (2nd), which gleaned victory in the last seconds against the SCO on Sunday. Led 1-0 at the break after a penalty converted by Sofiane Boufal (29th), Christophe Galtier’s men relied on Andy Delort, author of a double (57th, 91st), including a superb volley in additional time, to turn things around.

This victory allows OGC Nice to become the new runner-up for PSG, who snatched an unexpected victory against Lille (2-1) on Friday, thanks to a goal in the 88th minute from Angel di Maria.

Beaten by Nice last week (3-2), OL reacted by miraculously winning against Lens 2 to 1 on Saturday. In a spectacular meeting, Peter Bosz’s men took the lead in the first half with a penalty from Karl Toko Ekambi. Houssem Aouar, with a header, brought the score to 2-0 after a shot from the same Toko Ekambi, first pushed back by the goalkeeper (42).

Insatiable, Naples and AC Milan won on Sunday on opposing ground, in Salerno (1-0) and AS Roma (2-1), their tenth victory of the season, and continue their neck and neck at the top of the Italian Championship at the end of the 11th day.

Naples, winner on the ground of its neighbor and promoted from Salernitana, however occupies the goal difference (+20 against +15) the chair of leader in front of AC Milan, which went to win at the Olympic stadium in La Roma, with a great Zlatan Ibrahimovic, author of his 150th goal in Series TO.

The two leading teams (31 pts, 10 wins, 1 draw), the only ones still undefeated in Series In this season, keep seven points ahead of their immediate pursuer, Inter Milan, defending champion who dominated Udinese at home (2-0) at the start of the afternoon with a double from his Argentinian Joaquin Correa.

Defending Spanish champions Atlético Madrid corrected Real Betis 3-0 on Sunday for Matchday 12 of Liga, and temporarily rises to fourth place in the standings.

Diego Simeone’s men opened the scoring thanks to a hook-strike sequence from the left of Yannick Carrasco (26th), and consolidated their lead thanks to a goal against his camp from German Pezzella on a corner (63rd). Joao Felix, entered in the 71st minute in place of Luis Suarez, sealed the victory of his solo (81st).

A victory which places Atlético two points behind the leader, Real Madrid (24 points) winner 2-1 on Saturday in Elche, carried by Vinicius Jr, in the absence of Karim Benzema. Brilliant since the start of the season, the Brazilian scored a brace, first with a cross strike from the left (22nd), then with a clever sting ball (73rd). The young hope of Real, not selected for the next international window with the Brazilian selection, has scored 7 goals in 11 La Liga appearances this season, one more than in his two previous seasons (6 goals in 64 appearances).

Eight points behind the provisional Madrid leader, and for his first match since the ouster of Ronald Koeman, FC Barcelona conceded a 1-1 draw against Alavés on Saturday. Memphis Depay opened the scoring for the Catalans at Camp Nou with a brushed right strike in the 49th, but the Basques immediately equalized in the 52nd by Luis Rioja, author of a magnificent breakthrough and who relied on Joselu to snatch the draw.

The Catalans remain stuck in 9th place, and have won only four times in 14 games since the start of the season, in all competitions.

Chelsea strengthened their grip on the Premier League by winning in Newcastle (0-3) on Saturday for the 10th day, taking advantage of Liverpool’s draw against Brighton (2-2) and City’s defeat against Crystal Palace (0- 2), while United gave themselves air by dominating Tottenham (0-3).

Despite a valiant resistance from their hosts, the Blues ended up cracking Newcastle and come back with three valuable points from Saint-James’ Park. But Thomas Tuchel’s men had to wait for a double from their side Reece James to open the way to success (65th and 77th). In the process, Jorginho transformed a penalty (81st) obtained by Kaï Havertz.

With 25 units on the clock, the Londoners are 3 steps ahead of Liverpool (2nd) and 5 over Manchester City (3rd). With the approach of Tuesday’s trip to Malmö which could be capital in the Champions League and the reception of Burnley (17th) next Saturday, the Blues will have the opportunity to spend a quiet November international break.

On the 10th day of the Bundesliga, Bayern Munich recovered well after their historic loss this week in the Cup (0-5 against Monchengladbach). The Bavarians inflicted a heavy defeat on Union Berlin (2-5), thanks in particular to a double from Lewandowski.

For its part, Dortmund also wins, against Cologne (2-0), and remains in the heels of Bayern, two short lengths.

In addition, Friborg defeated Greuther Fürth (3-1), pointing to 3rd place, 3 points behind the leader. Wolfsburg won in Leverkusen against Bayer (0-2) and RB Leipzig conceded a draw to Eintracht Frankfurt (1-1).

1 thought on “European football: Marseille back on the podium, Vinicius wears Real”