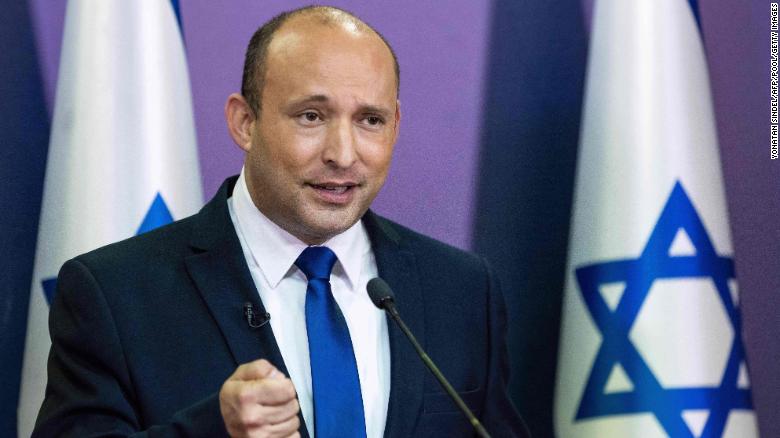 Naftali Bennett, the man who would replace Netanyahu 3:58

(CNN) – In the 2019 elections in Israel, Naftali Bennett’s right-wing party failed to cross the electoral threshold and was left without a seat in Israel’s Parliament.

Two years later, Bennett is on the verge of becoming Israel’s next prime minister.

Bennett has signed a landmark agreement with centrist leader Yair Lapid, who brought together a wide range of political parties as part of a coalition of change to unseat Netanyahu, including a far-left party and even, for the first time in the history of Israel, an Arab-Israeli party. If the Israeli parliament approves the deal in the next few days, Bennett will serve as prime ministers for the first two years of a four-year term, then followed by Lapid.

You will sit next to politicians with an ideology completely opposite to yours.

Bennett, key player in the elections

Bennett is to the right of even Netanyahu in several crucial respects. It would carry with it a history of inflammatory remarks about the Palestinians and a well-documented ambition to annex part of the occupied West Bank.

Naftali Bennett, leader of the Yamina party and possible next prime minister of Israel.

Few Israelis voted for Bennett’s party, Yamina, in the March elections, winning just 7 seats to Netanyahu’s 30. However, Bennett became a linchpin in the quest to form a government, courted by both Netanyahu and Lapid, who needed his party’s support to form a majority.

It remains to be seen how much of his program Bennett will be able to carry out while constrained by such an odd coalition. But if the deal sticks, Yamina’s leader, who has long been a supporting actor on the Israeli political stage, could become a major figure on the world stage.

Born in Haifa, the son of immigrants from San Francisco, Bennett served in an elite unit of the Israel Defense Forces before studying law at the Hebrew University. He later became an entrepreneur, launching a tech company in 1999 that later sold for $ 145 million.

He entered Israeli politics under Netanyahu’s wing years later, though the two grew apart after he was removed from office as chief of staff in 2008. Bennett made himself nationally known in 2013 as the leader of the pro-settler Jewish Home party, making his desire to prevent the formation of a Palestinian state a central axis of his speech to the voters. Following a merger with another party, he renamed the new force “Yamina” in 2019.

Staunch Critic of the Two-State Solution

In the following years, Bennett held various positions in the various Netanyahu governments, including that of Defense Minister, while continuing to flank Netanyahu on issues related to the Palestinian territories.

“The old models of peace between Israel and the Palestinians are no longer relevant. The time has come to rethink the two-state solution, ”he wrote in an article in 2014 review in the New York Times.

“The era of these negotiations is over,” he told CNN that same year. “The approach that we have been trying for twenty years has clearly come to an end.”

Since then, he has stood firm in his opposition to a two-state resolution, citing security and ideological concerns as reasoning.

In 2018, he said that if he were defense minister, he would enact a “shoot to kill” policy on the border with Gaza. When asked if that would apply to children breaking the barrier, the Times of Israel He reported that he responded: “They are not children, they are terrorists. We are fooling ourselves.

During the latest conflict between Israel and Hamas-led militants in Gaza, Bennett said the Palestinians could have turned Gaza “into a paradise.”

“They decided to turn it into a terrorist state,” Bennett told CNN’s Becky Anderson last month, before a ceasefire was agreed. “The moment they decide they don’t want to annihilate us, this is all over.”

Bennett, Netanyahu’s “stone in his shoe”

Bennett has been critical of government regulation of the private sector and unions.

“If there is something I would like to achieve in the next four years, it is to end the monopolies here and break the hold that the big unions have over the Israeli economy,” he told The Guardian in 2013.

On other issues, he is considered comparatively progressive. Despite his religious background, during the last election campaign he said that homosexuals should “have all the civil rights that heterosexuals have in Israel,” the Times of Israel reported, although he also said that did not mean that he would take steps to guarantee freedom. legal equality.

In recent months, Bennett has become a stone in Netanyahu’s shoe, fiercely criticizing his handling of the pandemic, as well as the country’s never-ending political stalemate.

Four elections in two years have left the country in a state of uncertainty, in which Netanyahu appears both stubbornly immovable and perpetually on the verge of losing power.

Last month, Bennett told CNN that compared to his time in the tech industry and in the military, Israeli politics was “a mess.”

“After four elections and another two months, it has been shown to all of us that there is simply no possible right-wing government that is headed by Netanyahu,” Bennett said in a speech on Sunday, shortly before reaching an agreement with Lapid, a a man she now refers to as her “friend.”

The two are an unexpected duo. Lapid, a charismatic former television host, has voiced support for a two-state solution with the Palestinians, as well as measures to reduce the influence of religion in Israel, including through the creation of civil marriages.

The question of how much of his personal ideology Bennett will succeed in promoting, if he succeeds in becoming prime minister, is an open question.

He has already hinted that the government will rely heavily on negotiating deals to function. “The left is making difficult concessions to allow me … to be prime minister,” he said Sunday. “Everyone will have to postpone the realization of some of their dreams.”

But in the next few days, Bennett will focus on achieving a closer dream.

Not all is said yet

The coalition agreement must pass a vote of confidence in the Knesset, the Israeli parliament, before a new government and prime minister take office.

According to Israeli law, the Knesset must also hold a vote of confidence within one week of being formally notified of the formation of a new government. This step might not take place until Monday, which means that the vote could take place as late as June 14.

That means there is still time for Netanyahu and his allies to convince members of parliament to defect from the coalition, or for procedures in parliament to somehow get bogged down. A collapse of the ceasefire with Hamas militants in Gaza or another external event could also topple the burgeoning new government.

But if the Bennett-Lapid coalition can hold its own, it would put an end to weeks (or years) of political maneuvering and strike a previously unlikely deal that will bring Bennett to Israel’s highest office.

– Hadas Gold and Reuters contributed to this report.

1 thought on “Few in Israel were looking for a leader to Netanyahu’s right: Naftali Bennett is willing to dethrone him anyway”