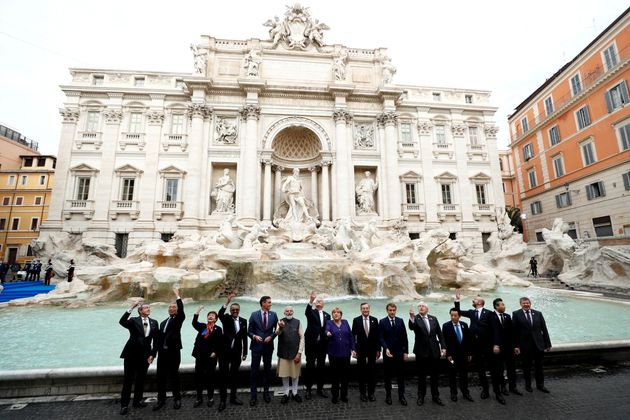 ECOLOGY – It is a gesture and a photo as do the millions of tourists who go every year in Rome. Superstitious or not, they position themselves with their backs to the Trevi fountain, and throw – with their right hands – a coin in an attempt to attract Neptune’s good graces.

Except this time it’s the greatest leaders on the planet (including Emmanuel Macron, Joe Biden and Angela Merkel) who posed at the end of the G20 summit which took place in the Italian capital. And a few hours before the opening of COP 26 in Glasgow, the cliché gave rise to a militant interpretation which put many personalities of the French left in all their states.

It all started with this tweet from Bruno Macaes, former Portuguese Secretary of State for European Affairs (2013-2015) who links the gesture of Heads of State and Government to the fight – which he considers minimalist – against global warming. “World leaders toss a coin at Trevi for luck in tackling the climate emergency,” he writes.

Immediately, many French elected officials with an ecological fiber took up this interpretation on their own to denounce what they consider as a failure of the G20 to tackle the climate challenge head on.

We can cite the national secretary of EELV, Julien Bayou or the finalist in the ecological primary Sandrine Rousseau who denounce for her part “the indecency” of the leaders.

What a confession …
For the #weather we don’t need luck, we need action! Concrete. Courage. https://t.co/jALu1gCF6d

Indecency
Our future does not depend on luck but on ambitious, radical public policies, without concessions to hostile lobbies.
These policies for which you are responsible … # COP26https://t.co/AodhDPDUAA

MEP for rebellious France, former spokesperson for the NGO Oxfam, Manon Aubry also sees it as an allegory of the struggle of the G20 leaders against climate change. His colleague in the European Parliament, Raphael Glucksmann, denounces “the voluntary impotence of men to be able in an image”. “This image sums up the role reversal in light of the climate issue. People who are supposed to embody seriousness (the leaders in costume) turn out to be funny, when those who are supposed to be light (“you’re not serious when you’re 20″) take the crisis seriously … ” he writes on Twitter.

Summary of the policy of world leaders against global warming.

They bet on luck.
We are asking for a change of model. https://t.co/S19w7YRwsB

We are saved with that … https://t.co/4M9gKrTRHQ

See also on The HuffPost: Why at COP26 the negotiations look like a liar poker

1 thought on “COP26: this photo of G20 leaders ulcerates the left – The HuffPost”