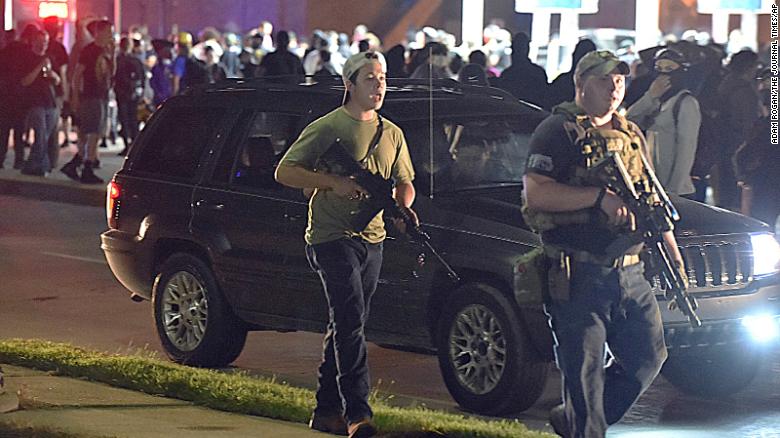 (CNN) – Kyle Rittenhouse, the gunman from Illinois who killed two people and wounded another during the riots in Kenosha, Wisconsin, last summer, will begin his trial Monday on murder charges in a case that will test the distinction between self-defense and vigilante murders.

Jury selection will begin this Monday morning for Rittenhouse, who is now 18 years old, and who is accused of fatally shooting Anthony M. Huber, 26, and Joseph Rosenbaum, 36, and wounding Gaige Grosskreutz, 27 years old.

The trial stems from Rittenhouse’s actions in the wake of protests related to the police shooting of Jacob Blake in August 2020, which left Blake paralyzed.

After a day of rioting in Kenosha, Rittenhouse picked up an AR-15 type rifle and traveled into town from his home in Antioch, Illinois. On the night of Aug. 25, he confronted people gathered near a car dealership and fatally shot Rosenbaum, according to a criminal complaint. Rittenhouse, who was 17 years old at the time, was chased by other people at the scene, who fatally shot Huber and wounded Grosskreutz, according to the complaint.

LeBron James speaks out on the Jacob Blake case 1:03

The teenager quickly became a polarizing figure in the country’s partisan battles during last summer’s Black Lives Matter protests, which led to cases of violence in Minneapolis, Atlanta, Philadelphia and elsewhere. Rittenhouse’s presence in Kenosha was also part of what experts warned is a rise in armed amateur paramilitary groups in protests across the country.

Prosecutors say Rittenhouse’s actions constituted a criminal homicide, but his lawyers say he shot the men in self-defense. Wisconsin law requires that when a self-defense claim is raised, prosecutors must rebut self-defense beyond a reasonable doubt, a difficult obstacle for the state.

“It’s quite a burden for the prosecution and I think that’s going to be the real challenge for them,” said John Gross, associate clinical professor and director of the Public Defenders Project at the University of Wisconsin-Madison School of Law.

Those chosen to serve on the jury will have to assess the reasonableness of Rittenhouse’s actions that night.

“We want the jury to be a check on the power of the state and enforce the standards of the community,” said Cecelia Klingele, associate professor of law at the University of Wisconsin-Madison. “So when the law requires reasonable use of force, we want our community to decide what is reasonable or not.”
How the night of August 25 unfolded

The violence in Kenosha, a city of about 100,000, came amid a tense summer of protests and riots as the masses denounced the US police’s treatment of blacks.

Rittenhouse, from nearby Antioch, had an affinity for weapons and supported “Blue Lives Matter” and then-President Donald Trump, according to his social media accounts. In the videos posted on a TikTok account, the individual can be seen participating in target practice and mounting a long rifle.

On August 23, 2020, Jacob Blake, a 29-year-old black man, was shot multiple times in the back by a Kenosha police officer. The shooting was recorded on mobile phone video and quickly spread across the internet, sparking outrage and protests, as well as violence and destruction in the following days.

Some people (including several who did not live in Kenosha) took the issue of security into their own hands. Rittenhouse was among them.

In a green T-shirt and reversed baseball cap, Rittenhouse, armed, walked the streets of the city on the night of August 25 with a group of armed men, video and photos of the protests show. Hours after curfew, Rittenhouse was walking the streets near a car dealership holding what investigators later determined to be “a 223 caliber Smith & Wesson AR-15-style rifle,” the criminal complaint against him states.

The complaint says Rittenhouse confronted the people gathered near the car dealership for unspecified reasons.

As Rosenbaum lay on the ground, Kyle Rittenhouse made a call on his mobile phone and said, “I just killed someone” while on the run, according to the complaint. A journalist following the suspect and the victim at the time provided investigators with more details about what happened. He told investigators that the man they shot was trying to grab the suspect’s gun, according to the complaint.

Another video shows the suspect fleeing the scene followed by people chasing him.

Kyle Rittenhouse, left, wearing an upside-down cap, walks down Sheridan Road in Kenosha, Wisconsin, around 11 p.m. on Tuesday, Aug. 25, 2020, alongside another armed civilian.

Kyle Rittenhouse left the scene of the shooting still armed and walked towards the officers with his hands up, but police passed by without stopping him, the video shows. In the end he went home and turned himself in at the local police department the next morning.

He was extradited to Wisconsin for indictment and released after posting a $ 2 million bond.