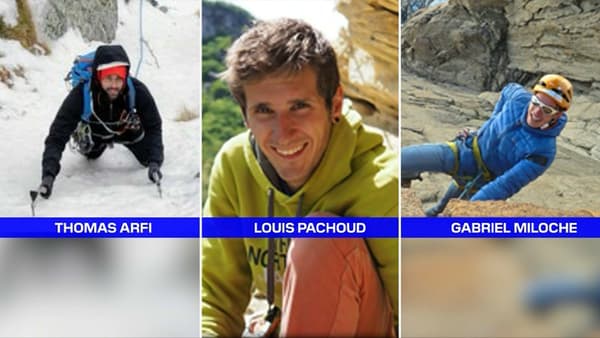 Three young French climbers disappeared as they climbed the virgin peaks of the Himalayas, in the Everest sector. They were probably washed away by an avalanche.

Research is still underway to try to find three young French climbers who disappeared on October 26 while they were climbing the virgin peaks of the Himalayas. They left on September 30 in the Khumbu region, in Nepal, in order to climb several peaks close to the mount Ama Dablam (6814 meters), mountains that are rarely climbed.

They are officially missing and help continues to search for them even though they have little hope. BFMTV.com takes stock of the situation.

· Who are the three missing climbers?

The missing group of mountaineers is made up of Gabriel Miloche, 27, from Briançon, Louis Pachoud, 27, from Chambéry, and their 34-year-old coach, Thomas Arfi, from Nice. They are all three described as seasoned mountaineers.

Thomas Arfi, who led the group, is a member of the Compagnie des Guides du Mercantour, based in Saint-Martin-Vésubie, in the Alpes-Maritimes. He attended the National Ski and Mountaineering School in 2008.

The three missing were part of a team of 8 at the start which split into two groups of 5 and 3 people. The climbers began their ascent last Tuesday, with a day of scouting to assess the snow conditions and check the weather. The climb to this summit, never climbed, was to last four days. They are part of a team of high-level mountaineers, the Groupe Excellence Alpinisme National (GEAN).

Since its creation in 1991, GEAN has trained several generations of French mountaineers. It is from his ranks that Lionel Daudet came out, who climbed some of the most difficult walls in the world and explored Antarctica with the navigator Isabelle Autissier, or the mountaineer Élisabeth Revol, survivor in extremis at the beginning of 2018 of a winter expedition on the Nanga Parbat in Pakistan.

According to Nicolas Raynaud, president of the French Federation of Alpine and Mountain Clubs (FFCAM) ​​interviewed on BFMTV, the young men “are very, very well experienced,” and their “contacts were quite good”.

These climbers, “are people who do not take decisions lightly (…) There had been a very large work of preparation, location on site” with binoculars, he emphasizes. However, “it is very high level mountaineering so inevitably the part of the random is even more important”, he explains.

Tuesday, October 26, they begin the ascent of a chute that takes place on the left of the west face of Mingbo Eiger. At 5:11 p.m., they send an enthusiastic SMS via their satellite phone from their bivouac to the other part of the group, according to FFCAM. This message will be their last communication.

The accident would have occurred the next day, during the descent from the summit. A helicopter chartered by the French Federation of Alpine and Mountain Clubs carried out a reconnaissance on Saturday.

On Sunday, Kailash Helicopter Services, a helicopter company that organizes rescue missions in Nepal, flew over the area. The photos taken show belongings (bags, tents) in the snow, as well as the traces of a large-scale avalanche.

These reconnaissance have made it possible to locate their tracks up to 5900 m on the ridge leading to the summit. The French then descended by the path they had taken during their ascent.

The head of GEAN Stéphane Benoist, who is on site, gave details on BFMTV this Monday morning.

“They triggered a first avalanche and then they descended for 300 meters so the first avalanche was absolutely without consequences. They managed it very well, they made the choice to give up, that’s very clear. cons, the part of mystery is then, when they came down on the wall (…) as a reminder, something happened that, for the moment, we do not explain, which makes them fallen at the bottom of the wall, ”he explains.

· Do we have any hope of finding them?

“The pilot really did the job, he landed at their camp, he went up the whole chute to the helicopter, he went down the whole chute, he found the material at the bottom … So for us there, the story is written. We are not talking about the missing but the deceased, “he explains. “There is their equipment at the foot of the wall. They fell at the bottom of the wall and the snow covered them,” he said on Monday morning.

Research resumed this Monday morning. “We have sent a team of 5 very experienced mountain guides. They are on their way and will start the search operations”, explains the president of the Nepalese national association of mountain guides, Ang Norbu Sherpa. Tarka Raj Pandey, deputy director of police, says a liaison officer has been dispatched to assess the situation.

But Éric Mesnier, former member of the high mountain gendarmerie platoon, explains that “everything is much more complex” in this area for rescue.

“The altitudes are completely out of the ordinary compared to what we can experience in France and in Europe, we have gigantic valleys, the flight time of a helicopter is tripled or even quadrupled.” In addition, “it remains a face that has never been covered so bringing rescuers inside, it is absolutely not trivial”, details the mountain rescue specialist on our antenna.

1 thought on “French mountaineers missing in the Himalayas: what we know – bfmtv”