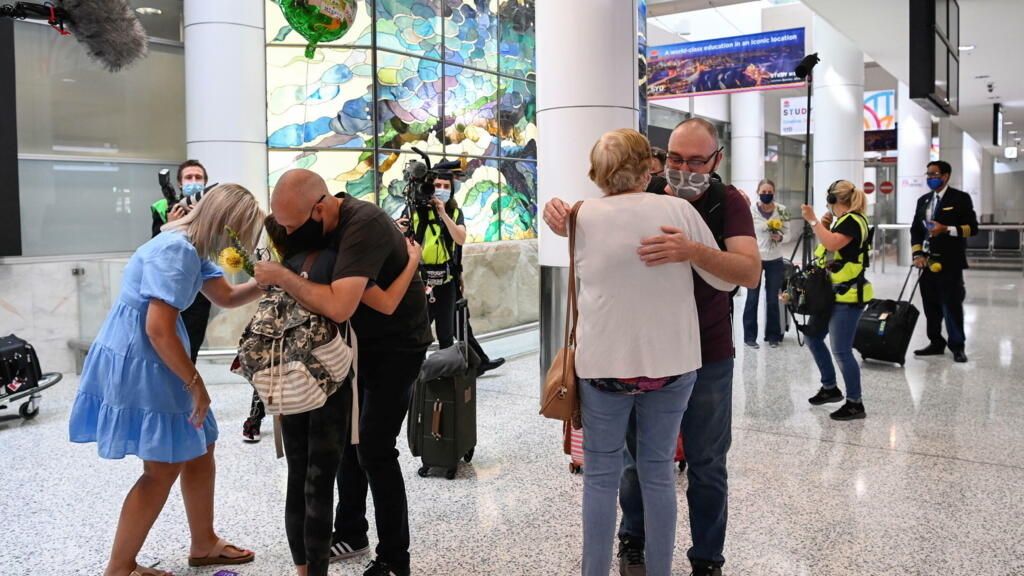 After 600 days of closure, Australia reopened its borders on Monday for the first time since the onset of the health crisis, allowing fully vaccinated Australians to travel without quarantine.

This is relief for Australian citizens. Australia reopened its borders on Monday 1er November, nearly 600 days after their closure, an event that gave rise to moving reunion scenes at Sydney Airport.

On March 20, 2020, the huge island-continent implemented one of the strictest border closures in the world to protect itself from the Covid-19 pandemic.

Tens of thousands of Australians living abroad were unable to return to their homeland for 19 months. Thefts were rare and nationals allowed to return had to undergo an expensive 14-day quarantine at the hotel.

The country’s two largest cities, Sydney and Melbourne, have decided to drop these measures and fully vaccinated Australians can now travel without quarantine.

The Australian company Qantas had grounded a large part of its fleet and its CEO Alan Joyce was delighted with this resumption of international flights which “took a long time to arrive”.

“It is wonderful to see that Australians can be reunited with their loved ones after such a long period of separation,” he said.

“It’s a big day for Australia,” Prime Minister Scott Morrison said, posting a message on Facebook saying the country was now “ready to take off!”

At Sydney Airport at dawn on Monday, the first passengers to disembark burst into joy, resulting in poignant scenes of hugs.

The arrival was “magnificent”, told reporters Tim Turner, who had not seen his son for a year.

Julie Choo, returning from the UK, admitted that she had held back tears as she landed.

“I can’t wait to touch my mother’s hand when I see her. I can’t wait to hold her in my arms,” ​​said the Australian returned to see her mother hospitalized. “This is going to be very moving.”

For some, like Lucinda Botlero, this reopening comes too late.

“I haven’t seen my family for four years, we’ve been trying to get in for a year and a half,” she lamented.

“I have mixed feelings because I couldn’t see my father alive again. He passed away just a week ago, (…) but it’s still good that I can attend his funeral . “

While some disembarked, others prepared to fly away to find their loved ones abroad.

Abhi Bajaj, 35, said he was “overwhelmed” to be able to embark for the United States to celebrate Christmas with the family, after two years without seeing her.

“I have been waiting for this day for a long time,” he told AFP, before leaving for Los Angeles.

The frequency of flights is expected to resume gradually, although there were few passengers on the first flights.

More than a million foreign residents remain stranded in Australia, unable to return to see friends or family, with the easing measures mainly applying to Australian citizens.

Some Australian states where the vaccination rate remains low will remain virtually closed. A mandatory 14-day quarantine will remain in effect.