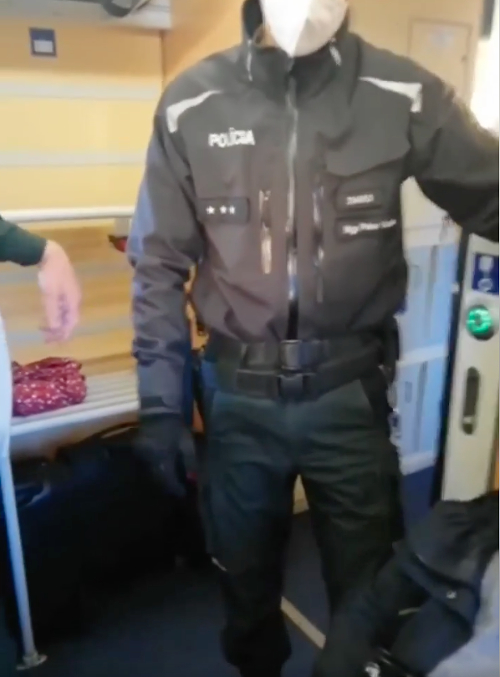 “Like it, you have a civic here. There are two options – or take a nap and go further to Martin, or it will be handled differently. The train driver told us that there are internal railway regulations that allow us to deport a passenger if he does not comply with them. “ said the police officer at the beginning in a video that was posted on a social network. Subsequently, the video shows how the woman continues to refuse to put on the veil, and so the police did what they pointed out – they picked up the woman, took her personal belongings and got out with her. Violence. Then the video ends. At this time, however, you would be searching in vain for the video – the page has deleted it from the social network.

Was this intervention on the part of the police okay? The spokeswoman for the Trnava police, to which the city of Piešťany belongs, is clear – yes, she was. “Police received word of a woman who refused to cover the upper airways on a train bound from Bratislava to Košice. At the station in the town of Piešťany, the patrol connected with the train driver of a specific express train. He stated that, on the basis of internal regulations, if they were not complied with, they were entitled to exclude a person from the train. ” wrote for Topky.sk Zlatica Antalová.

She added that the police repeatedly asked the woman to put a veil or respirator on her face after arriving at the train, but she repeatedly refused. Subsequently, after consulting with the train driver, they told the woman that he would have to leave the train in order to disregard the internal regulations of the Railway Company, but she ignored their orders and refused to get off the train. The police therefore decided to take a vigorous step.

“The woman was taken off the train at the station. No person was injured during the service. According to the law, the police wanted to solve the offense on the spot with a block fine, which the woman refused. In such cases, the police officers refer the case to the relevant RÚVZ, ” informed Antal. As she subsequently added, the Trnava men of the law record several cases of non-compliance with the rules, when they had to expel passengers from the train. However, as she explained, it was not just a matter of not respecting anti-pandemic rules, but also of other offenses. For example, they took out passengers who were under the influence of alcohol or were aggressive.

However, such a case is unique, according to a police spokeswoman. Usually, even if it happens that the police are called to the train, they will put a veil on their face after their arrival or when asked to do so, or if they refuse the veil completely, they will leave the train voluntarily. “If a person continues to refuse to put on the veil, the police are entitled to impose a block fine on the offender. However, the police deal with each case individually, given the circumstances and gravity of the offense,“Antalová clarified.

What does the railway company itself say about the incident? It confirmed that they actually have internal rules on the obligation of passengers to wear a veil or respirator during a train journey and that if they do not comply with them, they may be excluded from train transport. According to the company’s spokesman Tomáš Kováč, in such a case, train drivers can ask for assistance from the police, who can come to the nearest train stop as soon as possible. However, the company’s employees cannot impose fines on trains, according to Kováč, only the police are authorized to do so.

“Our train drivers deal with similar situations on a daily basis, often with the assistance of the Slovak Police, when there are warnings, sometimes even the exclusion of a passenger from transport. In 2020, we recorded 105 cases of incidents where passengers ignored hygiene measures, ie wearing towels while traveling by train. So far this year, we have seen 54 reported cases of passenger ignoring anti-pandemic measures, of which 13 have been resolved by exclusion from traffic. ” Kováč clarified, stating that passengers who experience such reprimands from irresponsible passengers perceive the actions of the Railway Company positively.

However, according to them, the exclusion of a passenger from the train occurs in very extreme cases – usually if he is aggressive, under the influence of alcohol, does not have travel documents, or repeatedly refuses instructions from guides to wear a veil or other alternative to a face mask. According to Kováč, however, inspections by train or police staff are not a reason for train delays. “However, if in such a case there is a delay due to non-compliance with regulations, ZSSK warns that damages for the delay of train traffic due to clearly proven guilt and intent of the passenger are recoverable. The perpetrator of such a delay is threatened with financial sanctions of up to several hundred euros in accordance with the ZSSK Transport Regulations, which we can also enforce in court. “ Kováč pointed out.

He added that passengers are informed about their obligations while traveling by train in the current pandemic situation, or through a recording in the information system, or via train radio and, if they do not, about the threat of exclusion from transport. “From the beginning of the pandemic, they are obliged to comply with these regulations.” We would like to emphasize that train travel is as safe as we behave and it is important that the passengers themselves are considerate and responsible. ” concluded Kováč.

1 thought on “She didn’t have a veil, so she was thrown off the train: Was the procedure okay? The police are clear on that! – Topky.sk”