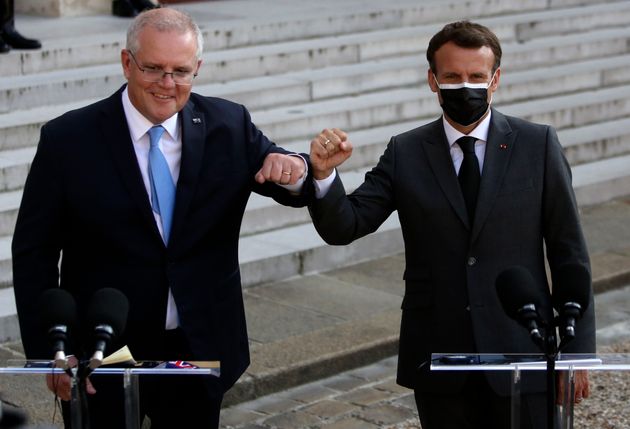 Emmanuel Macron and Scott Morrison, here at the Élysée in Paris, June 15, 2021.

SUBMARINES – “I know” Prime Minister Scott Morrison lied to me, said Sunday October 31st Emmanuel Macron about the secret negotiations between Australia, the United States and the United Kingdom on the Aukus defense agreement, which resulted in the termination of a Franco-Australian contract on submarines.

“Do you think Scott Morrison lied to you?” An Australian journalist asked him on the sidelines of the G20 Rome.

“I don’t think so, I know”, responded in a filmed response the French president (see below in video), who had already expressed his anger after the breakdown of the agreement between France and Australia for the sale of twelve submarines for 55 billion euros.

“We are discussing, we will see what he does,” he said of the possibility of giving him back his confidence.

Emmanuel Macron had met Thursday with the Australian Prime Minister for the first time since the crisis caused by the announcement in mid-September of a new alliance between the United States, Australia and the United Kingdom, called Aukus, who torpedoed the mega-contract of French submarines.

The French president then repeated to him that this breach of contract “had broken the relationship of trust between our two countries”.

This quarrel also caused a crisis between France and the United States, going as far as the recall of the French ambassador for a few days.

During a meeting with US President Joe Biden on Friday, the latter, obviously eager to overcome this quarrel, did not apologize but acknowledged that what had been “made was awkward and was not done very elegantly”. He assured that he believed that “France had been informed well in advance that the contract would not be done”.

See also on The HuffPost: In front of Macron, Biden recognizes a “clumsiness” on the submarine file

1 thought on “Emmanuel Macron: “I know” that Scott Morrison lied to me about submarines – The HuffPost”