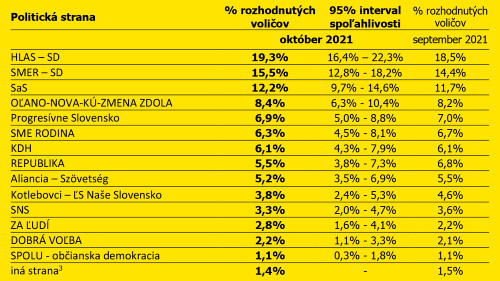 The winner of the 2020 elections, the OĽaNO party, currently has the support of 8.4% of voters. This is followed by the non-parliamentary party Progressive Slovakia with 6.9% of the vote. We would also get into parliament, with 6.3% of the vote, KDH with 6.1%, the Republic with 5.5% of the vote and the new allied Hungarian party, the Alliance-Szövetség, which would be elected by 5.2% of voters.

This was shown by a survey conducted for TV Markíza by the Focus agency from 20 to 27 October on a sample of 1,009 respondents.

The survey also found that 17.6 percent of respondents would not be able to vote and 15.5 percent said they did not know.

1 thought on “NEW SURVEY The strongest is Pellegrini’s Voice-SD, followed by Smer-SD! 9 parties would go to parliament – Topky.sk”